Search this site (start typing)
By Richard Juhlin
23 May 2017

Prestige Champagnes are usually a producer’s best – and most expensive – wine. But with the trend towards vineyard wines, special cuvées and multiple bottlings, there’s cause for confusion. Hear DWWA Champagne Regional Chair Richard Juhlin demystifies the category.

Prestige Champagnes are usually a producer’s best – and most expensive – wine. But with the trend towards vineyard wines, special cuvées and multiple bottlings, there’s cause for confusion. Hear DWWA Champagne Regional Chair Richard Juhlin demystifies the category.

We’re all familiar with magnificent and prestigious names like Belle Epoque, La Grande Dame, Cristal, Winston Churchill and Dom Pérignon. But what really defines a prestige Champagne? Champagne may be the world’s most controlled wine region, but when it comes to how a prestige Champagne should be constructed, there are no rules at all, which can be very confusing.

Prestige Champagnes are also usually the producer’s most expensive wines and should be the essence of the very best you can achieve. A typical prestige Champagne is made exclusively from grand cru grapes from the oldest vines. The ageing period in the cellar is maximised and there are numerous examples of very late disgorged wines. Some use oak barrels, and the presentation is the most luxurious possible: ornate boxes of fine woods with specially designed bottles.

Dom Pérignon 1921, launched in 1936, must be regarded as the first prestige Champagne. Roederer’s Cristal was admittedly sold even earlier to the Russian Tsar, but the first vintage to come on the market was the 1945, not sold until the 1950s. The first vintage of Taittinger’s Comtes de Champagne was 1952.

Further confusion around the concept of prestige Champagne arises from the fact that several of the most famous Champagne houses now make vineyard wines – almost like some growers – in exclusive small amounts, and at exorbitant prices.

For example, if you look at Billecart-Salmon you will find that its most expensive wine is the vineyard wine Clos St-Hilaire, although the classic prestige wine is the Cuvée NFB. If you ask Krug it will answer that all its wines are prestige Champagnes, but the proud flagship is not Clos du Mesnil or Clos d’Ambonnay but the non-vintage Krug Grande Cuvée, even though, paradoxically, it is the cheapest wine. 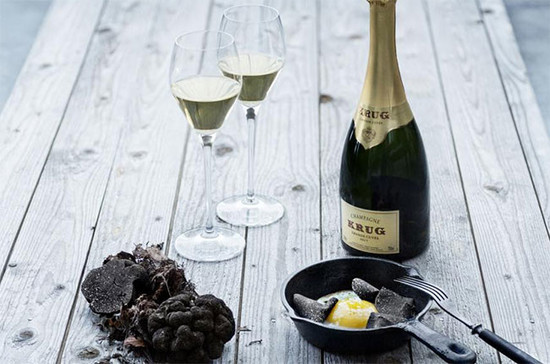 Philipponnat, on the other hand, has had a clos wine as its prestige Champagne since the 1940s; Salon makes only one wine; and Jacquesson now specialises almost exclusively in clos wines and lets the disgorgement date determine whether the prestige epithet should be used or not. Bollinger does the same with its RD despite the fact that its rare gem is Vieilles Vignes Françaises. A few houses make two prestige Champagnes beyond the rosé versions of the same high quality but in different styles such as Deutz (William / Amour) and Perrier-Jouët (Belle Epoque / Belle Epoque Blanc de Blancs).

Since 2012 I’ve organised a tasting each May of virtually all quality Champagnes in a given category. The inaugural year focused on blanc de blancs, where Krug’s Clos du Mesnil 1998 took top honours; last year was rosé, where Dom Ruinart’s 1988 and Cristal’s 2002 shared the plaudits. This year we tasted 109 white prestige Champagnes from 105 leading producers. Wines were tasted blind over two days by me and a panel of eight fellow Champagne Club members. 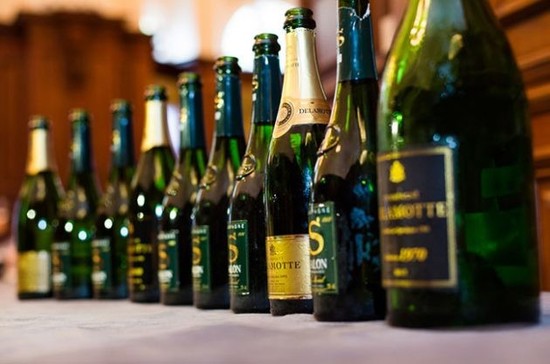 In previous years my scores have been less in accordance with the overall jury’s scores. This time it gratifyingly shows an almost uncanny consistency. The scores show the big names have a firm grip on the top placements, and that styles, as well as vintages, can vary greatly. Oak barrels, steel tanks, vinification style and grape composition all fortunately play a minor role. Highlights were found across all styles – a reassuring sign that prestige Champagnes will continue in their diversity.

After a slump in the slightly weaker 1997 and 1999 vintages, the legendary Salon is back in top shape with its cool, seductive and sublime, ultra-stylish 2002. Krug need not lament that it sent Grande Cuvée, and can celebrate a welldeserved score for its inimitable depth and incredible Pinot complexity.

The king of growers, Anselme Selosse nowadays makes cult vintage and extravagant clos wines from individual grand cru parcels, and his solera wine, Substance (made of wines from 1986 to the mid-2000s) took us all by surprise. Louis Roederer receives much criticism for releasing its Cristal prematurely, but the 2006 is already incredibly elegant and won high scores all round. Two powerful 2004s excelled: we all loved the lavishly rich La Grande Dame, while the ultra-intense, acacia- and coffee-scented Dom Pérignon divided the group more. For me the Dom Pérignon was probably the biggest positive surprise.

To succeed in getting a 2005 into one of the top spots is a great achievement. The vintage generally lacks elegance and lives almost exclusively on its fat, almost cloying fruit. The premier Champagne of the 2005 vintage is undoubtedly Taittinger’s Comtes de Champagne with its lavishly rich exoticism that, ever so slightly, resembles the world-famous 1976 in youth. The Amour de Deutz 2005 impressed in a similar style. 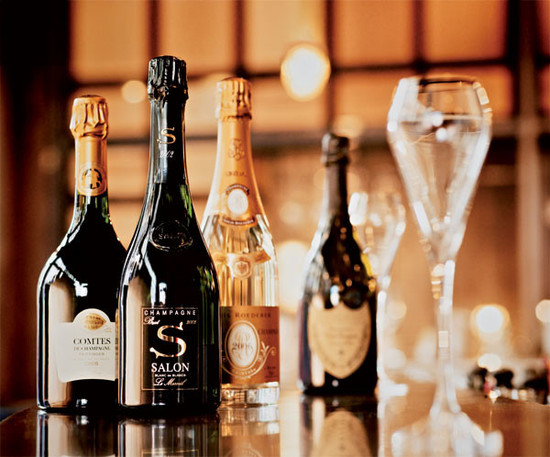 The famous 2002 vintage showed its beautiful side in the form of Piper-Heidsieck’s coffee-roasted Rare, while Dom Ruinart, Belle Epoque Blanc de Blancs and Pommery’s Cuvée Louise are all going through a closed period. Even with Bollinger RD you should wait a while to enjoy the full gastronomic potential.

A number of wines from the relatively ordinary vintage 2000 shone, benefiting from their age. Meanwhile, two 1999s (R Lalou and Billecart NF) drowned a little among the competition – they are extremely pleasant to drink now but even better in magnum. I have previously tasted Henriot’s 1998 Enchanteleurs in a purer and better condition, likewise Jacquesson’s 1995 DT, while Charles Heidsieck’s 1995 is always intensely pleasurable.

In Bouzy, Clouet flopped this time, but despite a modest placement, I will forever remember the delicious aromas of raspberries and meringue in George Vesselles’ Cuvée Juline. For future Bouzy moments I choose, as usual, Paul Bara’s still youthful cloudberry-and passion fruit-scented Comtese Marie de France 2002. In Verzenay, Michel Arnould reigns with the far too young Mémoire de Vignes, and in Aube, nothing beats Michel Drappier’s Grande Sendrée.

Among the unknown newcomers in the peripheral corners of Champagne, I was most pleased with Bordaire-Gallois and Coessens. The most impressive wines made of Pinot Meunier grapes came from Loriot, José Michel and Dehours. Palmer’s crowd-pleasing mellow roasted Amazone took first place among the coops, closely followed by slow starter Cuvée Echansons from Mailly. 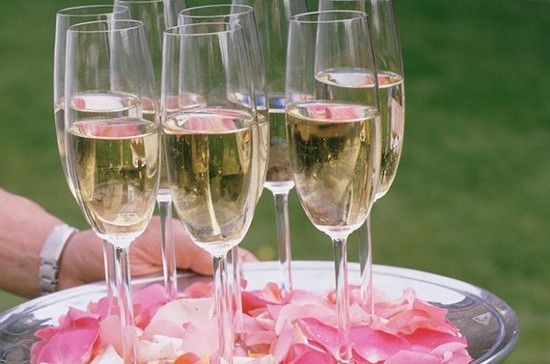 At the core of the Marne valley there were fewer peaks this time. The famous Clos des Goisses always scores poorly in blind tastings with its difficult-to interpret, youthful and sullen personality. Decanted and enjoyed with food, the impression is the reverse.

Giraud’s Fût de Chène, Roger Brown’s Reserve Familiale, Gosset-Brabant’s Cuvée Gabriel and Goutorbe’s Special Club are all, despite their placings outside the top 20, fine examples of what Aÿ can convey in its best moments. Across the river, I am most fond of Tarlant’s heavily oaked Cuvée Louis.

In the Côte des Blancs, we find a plethora of affordable, high-class prestige Champagnes. Mesnil-sur-Oger is home to Pierre Peters with the ultra-pure Lés Chétillons, Gonet’s Belem Nita, Pascal Douquet’s Vieilles Vignes and a promising Confidence 2008 from newcomer Vergnon, and neighbour Guy Charlemagne with the toffee-rich Mesnillésime 2004.

Agrapart and De Souza in Avize did not shine as brightly as I expected this time, but from neighbouring Cramant we, as usual, enjoyed a smiling Bonnaire, Diebolt-Vallois’ stately Fleur de Passion and a toasted yet crisp magnum of Gimonnet’s Collection 2005. Besides the top-rated St-Vincent from Legras, Chouilly fielded a dark horse in the top 50 with the limited-production Prestige de la Cave 2006 from small grower Michel Genet.

Most brightly in the Côte des Blancs shone the magical Clos Cazals 2002 from Oger. This lesserknown prestige wine has only been made since 1995 and is reminiscent of Salon.

Amazement Clos Cazals in Le Mesnil-sur-Oger is one of a number of walled vineyards in Champagne spread across my features when Ployez-Jacquemart’s Liesse d’Harbonville 1999 was presented – an extremely delicate creation with the finest lime blossom bouquet, and the elegance of Dom Ruinart.

I was really out on that one with my guess. Also noticed in this premier cru area was the impressive but slightly overloaded Coeur de Cuvée from Vilmart, Léclapart’s l’Apôtre and Cattier’s delicate Clos du Moulin with its grassy, gooseberry scents and creamy texture. Lassalle’s Special Club 2006 from Chigny-lès-Roses is even creamier, more voluptuous and irresistibly vanilla-scented.

The biggest disappointments this time? Happily, I can barely remember, and would prefer to revel in the fireworks of enjoyment that this tasting brought, celebrating the love and dedication of producers which underpin the magic of their prestige Champagnes. To achieve such myriad styles and level of quality from about 30 villages is nothing short of miraculous.