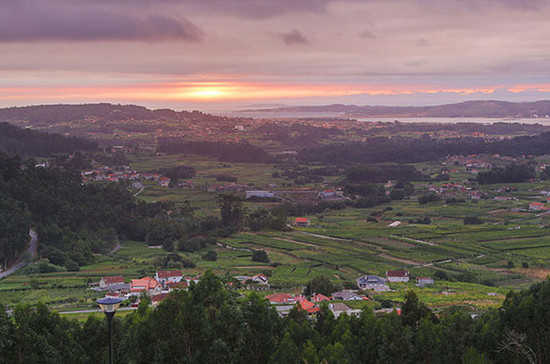 The view from the terrace at Vionta is so lovely it’s hard to imagine anyone gets any work done. Far better to stand and gaze out across the valley of vineyards which stretches out down the slope in front of the winery. The light catches the glint of the river that once powered the water mill (this is the land of water mills, as well as vines). In the distance is the Atlantic, blue sea meeting blue sky.

It’s a sight to make the mouth water. That’s because Rías Baixas is not just about the Albariño grape. It’s also about the fish and shellfish that also come from these parts. Mussels grow on the thousands of pontoons in the low inlets (or ‘Rías Baixas’) from the sea. Every local will order the delicacy of percebes or goose neck barnacles, and then follow on with clams, spider crabs, lobsters and plenty more besides .

It’s no wonder that the Ferrer family chose Rías Baixas for their first-ever investment away from the vineyards of Catalunya. The chill of the Atlantic, the gentle inlets, the rolling hills, the broad, open skies, the gastronomy and the centuries of Celtic influence have a special charm. What’s more in the climate and soils of Rías Baixas Albariño has found its home, a white wine that has made a reputation for Spains’ white wines internationally.

The vineyard and the grower 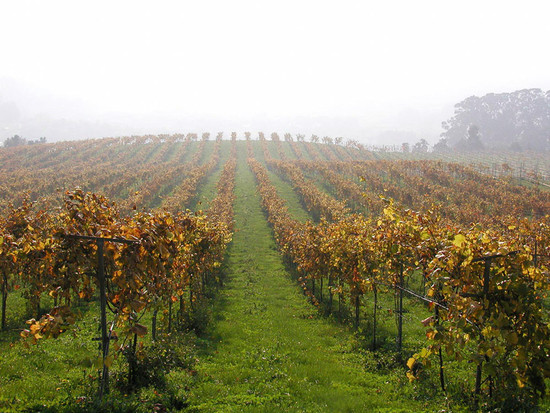 Rías Baixas is a land of small holdings or minifundias. Just over 5,500 growers together farm just over 4,000 ha, separated into no fewer than 21,825 parcels. Each grower owns on average just 0.19 ha*, often in separate parcels, divided by inheritance. Most have longterm relationships with wineries. Manolo is one of Vionta’s long- standing growers and lives in a house, parts of which date back to 1590. Visitors quckly learn that Rías Baixas abounds in history.

In his garden in Ribadumia Manolo grows lemons, figs, apples, pears, potatoes, cabbages and grelos (turnip tops). At the end of the garden is the vineyard. He grows his Albariño is grown on the traditional parral, or raised canopy or pergola. Until recently the canopy posts were made from the local granite. However tractors and granite don’t mix, so it’s more usual if less romantic to find a metal framework for the vines. Nowadays many people are plantings vines on cordons, as the work in the vineyard can be more mechanised, and the fruit can be exposed for ripening where necessary.

Manolo likes the parral. The leaves at the top protect the fruit when it rains, but underneath the breezes can still blow through, lessening the chances of mildew. In July he removes some upper leaves to bring in light, and does a green harvest to remove ‘los nietos’, the less promising ‘grandchildren’. 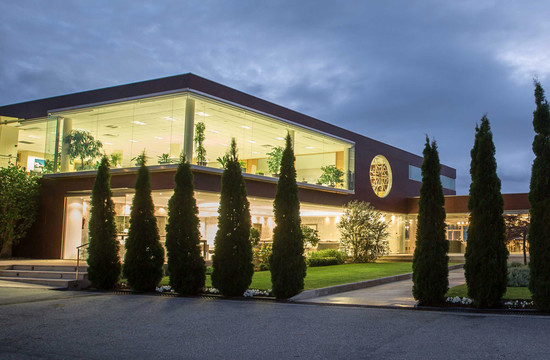 Manolo points out that the vines become lazy in the fertile soil, so every year he cuts through the top layer of roots that surround the vines by hand in order to encourage sturdy downward growth.

Today’s canopies are taller than they used to be (1.8m rather than 1m), and the vines themselves are spaced 4.5mx4.5m.

The tractors are specially small to fit in neatly between the vines and the small vineyard parcels. They buzz up and down the country lanes between the school buses, cars, and lycra clad cyclists, giving a picture book feel. 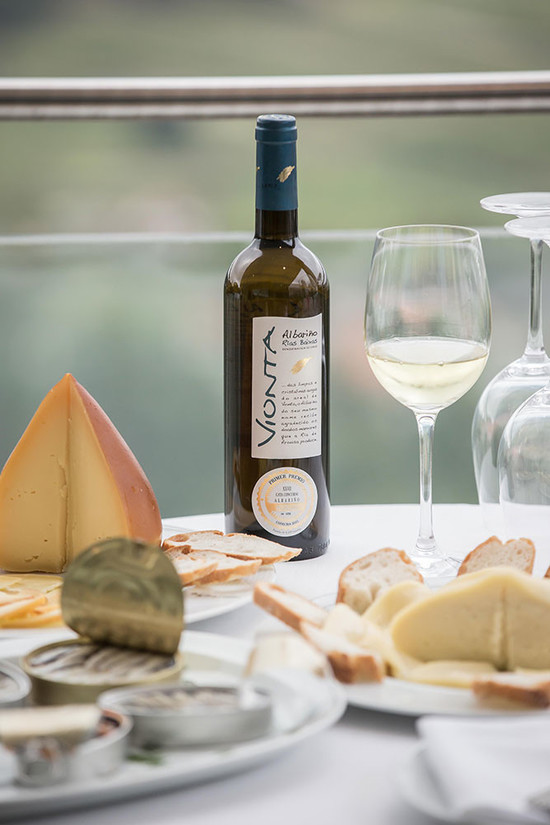 Vionta is named after one of the islands that cluster just off shore. The wine has all the stone fruit typicity of Albariño, but with an additional mineral freshness, and a complex texture indicating the 4-6 months its spends on lees.

On the nose there is a waxy aroma with notes of peach conserve and cinnamon. This is a wine that speaks of granite in the vineyard and salt wind from the sea. In 2015, Vionta was voted best wine at Rías Baixas’ annual Albariño festival. Available in Ocado in the UK.

Agnus Dei refers to the arrival of the Ferrer family in Rías Baixas, as it was the name of the original bodega where Vionta began. It has a golden cling peach ripeness, but with a lively tang of acidity to counterbalance. This green apple character is typical of the Salnés subzone. To add complexity, a small amount of the previous year’s wine is sometimes blended in.

Rías Baixas is bursting with energy, with floral, and fresh herb aromas, and a birght crispness on the palate. Its ripe fruit charm comes from fruit from the Condado zone of Rías Baixas

Winemaker Adolfo Heredia joined Vionta with the Ferrer family’s first harvest in 1996. 22 years later he is still fascinated by the variety and its potential:

‘What I find so interesting about working with Albariño is the range of different methods you can use to draw out different profiles. For instance: cold maceration before fermentation; leaving the wine on its lees [which develops richness and texture in the mouth]; malolactic fermentation (or not); different fermentation temperatures, different yeasts and so on.

‘The hardest to achieve is the malolactic fermentation [or conversion], in the years when we can achieve it. The lactic bacteria which convert the crisp malic acid to a mouth feel that is smoother and creamier really struggle to work in the typically high acid, low pH environment of Albariño.

“Finally of course, we have to contend with the rainy climate, which encourages diseases like mildew.” 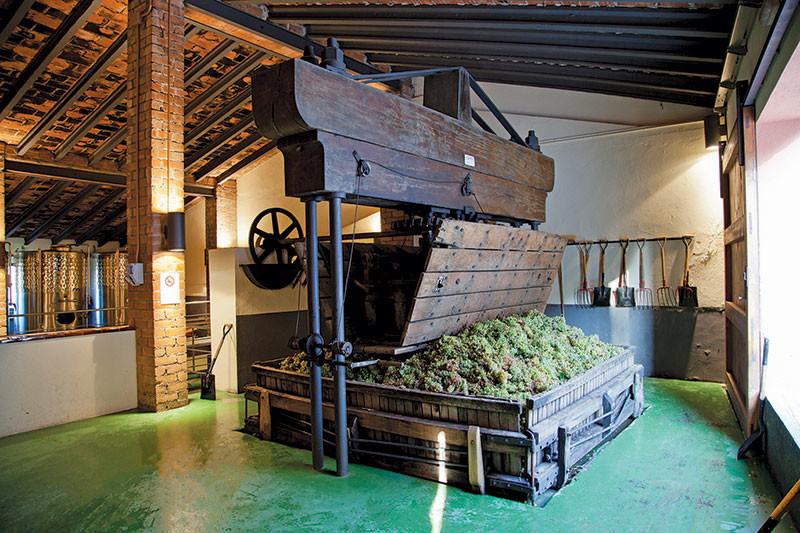 Can Sala and La Freixeneda: The original icons from the Freixenet Family 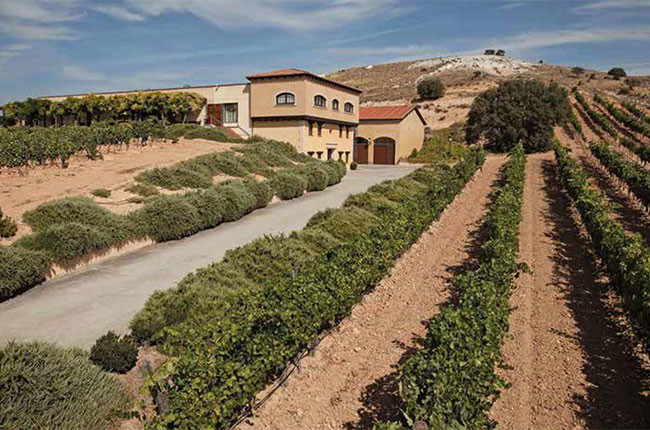