Right at the beginning of 2015, I visited Guangxi province to explore one of its indigenous varieties—Vitis quinquangularis Rehd (毛葡萄) – which literally means 'grape with furry vines' in Chinese.

These furry-vined grapes are the most commonly seen wild grape variety in Guangxi, and are the variety with the most variations in the area. Mainly produced in Du'an and Luocheng, the variety has pentagonal leaves, hence is also called '五角叶葡萄 (pentagonal leafed grape)' in China.

Vitis quinquangularis Rehd is believed to have originated in China and is categorised as one of the East Asia species under Euvitis, Vitis vinifera L. of the Vitaceae family. It is also the most widely spread wild East Asia species of grape in China.

For a long time, I have heard that the locals make wines using this variety, but I had never actually been there to see how it works.

The local people told me that these woody climbers usually grow on gentle slopes of the mountain side, where they cling to tall trees, shrubs or stony cliffs. The vines have dense canopies and are prone to grow upwards, leaving the lower half of the trunk leafless and bare. While the vine concentrates its power mainly on vegetative growth, its fruit set rate is very low, which leads to a low yield (around three tonnes of grapes per hectare). As these vines are rarely pruned, the yield visibly fluctuates year after year (picture 1).

Guangxi is located in the humid and warm south of China, which means that European species suffer from severe diseases here. They are seldom found in this area, not even for producing table grapes (table grapes are usually crossings of European and American varieties).

In contrast, the indigenous Vitis quinquangularis Rehd is highly disease resistant, and is fully adapted to the local environment, especially in the hilly northwest of Guangxi. In the main growing areas of the grape, Du'an county and Luocheng county, many vines are more than 50 years old. Some of them are even more than 100 years old.

The Luocheng Mulam Autonomous County is especially known for its large plantings of this grape. It is regarded as the 'Chinese heartland' of the wild grape variety and has been granted with the collective trademark of Geographic Indications of Origin by the government (picture 2). 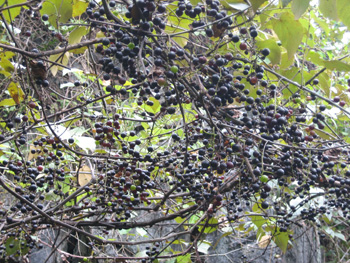 The budbreak of Vitis quinquangularis Rehd comes at the end of March, followed by flowering at the beginning of May; the fruits mature at mid-to-late August, and leaves fall off at the end of the year.

In the wild, each individual vine of this local variety grows at a hugely different speed; therefore it's difficult to harvest fruits of identical maturity. And similar to other wild grape varieties in China, wild Vitis quinquangularis Rehd vines yield small clusters of tiny berries, with low sugar content but extremely high acid. Due to these factors, it is simply not financially feasible to harvest these grapes wild and make them into wines.

To make it more difficult, Vitis quinquangularis Rehd is typically dioecious (*male and female flowers are on different individual plants), and it is difficult to breed through cuttings.

However, thanks to years of research, the local growers managed to plant patches of wild female and male vines together through grafting. Fruits harvested from these vines are then made into wines. In Guangxi, currently there is 5,000ha of these wild and manually planted vines available for winemaking.

Now, the researchers are working on hybrids of Vitis quinquangularis Rehd from Du'An County, and European grapevines. They have succeeded in breeding quality varieties, including those known as NW196, NW213, NW296 and NW741. These varieties are monoecious (both male and female flowers coexist on the same plant), tolerant to high temperature and humidity and have higher and more stable yields.

Among these breeds, NW196 is especially successful, with 500mu (33 hectares) being planted in Du'an, Guangxi as a demonstration of its potential (picture 3).

The NW196 variety sprouts at the end of February and flowers by early April; its fruits mature at mid-to-late June, and leaves fall at the end of November. It yields as high as 19 tonnes of grapes per hectare, which can be even higher, if proper care is taken to allow the vines to produce a second batch of fruits by mid-or-late November. 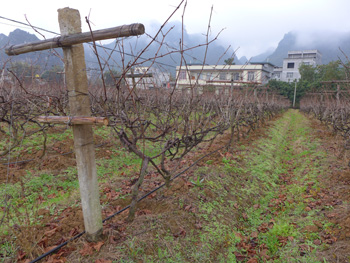 Compared to wild Vitis quinquangularis Rehd, NW196 enjoys a higher fruit set rate and a more stable yield; it produces neatly-shaped bunches of grapes with even maturity; the amount of soluble solids in the fruits is higher (around 189g/L), while the acidity is lower (although it's still fairly high compared to other grape varieties, especially fruits from the second batch of the year).

Wines made from Vitis quinquangularis Rehd grapes are high in tannin (on average 32.5g/100ml), anthocyanin and acid (15g/L or even higher, when calculated as tartaric acid), according to local researchers. Therefore, during vinification, all methods allowed by law have to be taken to reduce the acidity. Wines made from this variety are used to add acidity and colour to the blend in some wine regions.

A weak nose and the lack of fresh fruit are other disadvantages of this variety.

Mi Luo Tuo Wild Grape Winery was the destination of my journey to Guangxi. The winery was founded in 1969, when it mainly produced Baijiu (Chinese white spirit). From 1975, it started to produce wines made from the furry-vined local variety, and gradually became the most influential winery of its kind.

Our tour of the winery was led by the former chief engineer of the winery, Huang Honghui, who invited us to taste two wines made from the local grape in different styles. The winery itself seemed to have no visible difference from any regular winery—except for the fruit they use to make wines.

Ruby to brick-red, clear on the appearance; the nose is very mild, with scents of plants, smoke and a touch of earth; soft in the mouth, mid body with a rather clean finish.

Deep brick-red, clear; honeyed and jammy, with some stewed fruit aromas; sweet palate, with a rich mouth feel, and a good acidity balance.

These wines may not count as fine wines if judged by European standards. However, they are made using local natural resources, and bring incomes for the local economy; therefore, obviously, they are produced for a very good reason.

However, since these grapes are not Vitis vinifera anyway, why not abandon the European routine, and explore a wine that better reflects the unique features of the grape, and friendly to the local palate?

The winery is doing just that. Its team is now actively developing new products with the help of research institutions, and I look forward to trying their new creations during my next visit.

The phrase 'Mi Luo Tuo' is a word from the Bunu Yao ethnic group dialect.

Therefore 'Mi Luo Tuo' means 'ancient mother'. Now the phrase is used to indicate the ancient goddess who was believed by the ethnic group to have created the world.

The ancient song Mi Luo Tuo is a well-known mythic tune in areas dwelled by the Yao ethnic group such as Du'an, Bama of Guangxi province. The song describe how the goddess' great deeds in creating the world and human-beings.

Though the Yao ethnic group has its dialect, it doesn't have its own written words. The ancient song was passed down by the Yao people by word of mouth until today. 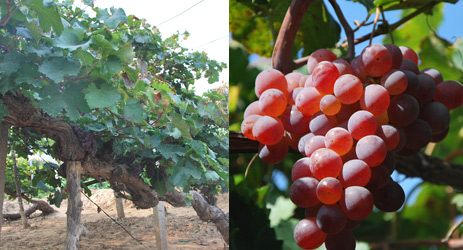