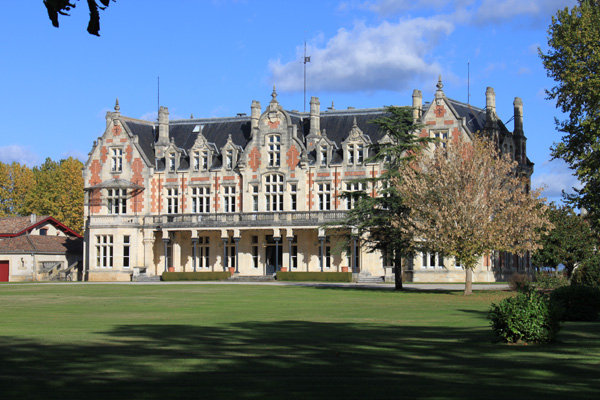 Location: AOC Margaux, in the village of Cantenac.

- Owner Simon Halabi made his money in property with investments in, among other things, the Shard in London and Mentmore Towers (once owned by the Rothschilds). He bought Cantenac Brown in 2005 for a reported €72 million.

- Cantenac Brown produces a honey from the estate – part of the biodiversity campaign that they have introduced, with insect hotels and wild flower hedgerows.

- John-Lewis Brown, who gave his name to the chateau, was known for his entertaining, hosting large parties at his Margaux estate. It still has today one of the largest parks in the Médoc, and welcomes the Vélo Tout Terrain cycling race through the AOCs of Margaux, Moulis and Listrac each May.

- The distinctive 19th century chateau building is in the style of a Tudor manor house, or a Scottish country landowners retreat – or, most famously, an English home counties boarding school. You get the picture anyway – an imposing red-brick building with a grey slate roof, in contrast to many local chateaux that have used a paler stone such as limestone.

- There have been many rumours of the chateau turning into a luxury hotel, with a planning permission application lodged at one point, but things seem to have gone quiet on that front.

Most notable previous owner: John-Lewis Brown (1769-1851), a doughty Scotsman who gave the estate its name. His grandson of the same name was also a famous landscape and animal painter, receiving the Chevalier de la Légion d’Honneur.

Other chateaux owned: Chateau Brown Lamartine (same vineyard, but from five hectares of vines that are within the AOC Bordeaux appellation). 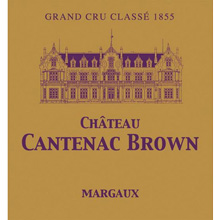 The name of this estate has changed several times over the years, a reflection of just how many owners have passed through. The first owner of note here was the Irish Jacques Boyd who bought land in Cantenac in 1754 and planted vines that would eventually become both Boyd-Cantenac and Cantenac-Brown. But it was Scotsman John-Lewis Brown who bought the estate in the early 19th century and began construction of the current building. The chateau is named after Brown, and the commune of Cantenac in which it is located.

Brown’s grandson, John-Lewis Brown (1820-1890) was a well-known painter (depicting both the American Revolutionary War and the Franco-Prussian war) who was born in Bordeaux and spent much of his childhood holidays at the property. In 1843, two Parisian bankers, Mr Fruitier and Mr Gromard, took over when financial constraints forced the Brown family to sell. Gromard was still owner when the 1855 classification named the chateau (then known as Chateau Boyd) a Third Growth but five years later, he sold to Louis Armand Lalande, a well-known Bordeaux figure who also owned Léoville Poyferré. He restored the name Cantenac Brown and extended the building to its current form, while also busying himself landscaping the beautiful English-style park that is still in place. Other owners over the years have included the courtier family Lawton – through Lalande’s daughter, who married Edouard Lawton, then later the du Vivier family, also Bordeaux courtiers. Cognac producer Remy Martin became brief owners, until 1989 when AXA Millésime took over and began finally investing heavily into an estate that had suffered from a little neglect. In 2006, the British Simon Halabi family bought the property from AXA, with José Sanfins as managing director.

Plantation and vineyard work:Cabernet Sauvignon (65%), Merlot (30%) and Cabernet Franc (5%) planted to 8,500-10,000 vines per hectare, with an average yield of 45 hectolitres per hectare. Everything here is done according to sustainable, organic principles, with the use of chemical fertilisers dramatically reduced from the years when yields were high. Over 400,000 vines are looked after throughout the vineyard, with hand-harvesting and hand maintenance work from pruning to bud removal. Around 130 people will pass through the vines at various times of the year checking every single grape cluster and carrying out necessary work, before around 200 pickers move in at harvest time. Plant-based fertilisers are used. Vineyard manager Hervé Martin.

Vinification: Temperature-controlled stainless steel vats, with vatting for 15 to 25 days. Malolactic fermentation in barrels and vats, with oak ageing for 12-15 months (50-70% new oak for the first wine, then 20-30% new oak for the second wine). Egg-white fining, and estate-bottled. Plots are vinified separately according to grape variety, age of vines and terroir, and yields have been brought down. The quality has definitely been improving under José Sanfin: the wine was known for a long time for its long ageing, needing a good few years before softening, but recent vintages have worked to a plumper, richer and more appealing style. Cellar master Guillaume Doucet.

Terroir: This is typical Médoc terroir, with the quartz stones referred to as the ‘diamonds of the Médoc’ and a full mix of differently sized gravels and clay-limestone allowing good drainage.

Recent improvements or changes: Improvements have really concentrated in the vines over recent years, with extensive replanting, and the purchase of several new plots to increase the overall size by several hectares for the introduction of the white wine Alto de Cantenac Brown.