Re-live the Bordeaux 2014 vintage growing season ahead of en primeur tasting week with this Decanter.com weather infographic, which draws on reports by Christie's consultant and Sauternes expert Bill Blatch and the union for classified chateaux, the UGC.

In a report distributed by the UGC, Bill Blatch described the Bordeaux 2014 vintage growing season as starting with ‘an extremely auspicious beginning, a very difficult and worrying middle and a glorious happy ending, and some excellent wines’.

One of the hottest Septembers on record in the Bordeaux area was considered at the time as having potentially saved the vintage. Weather conditions had been mixed up to that point. 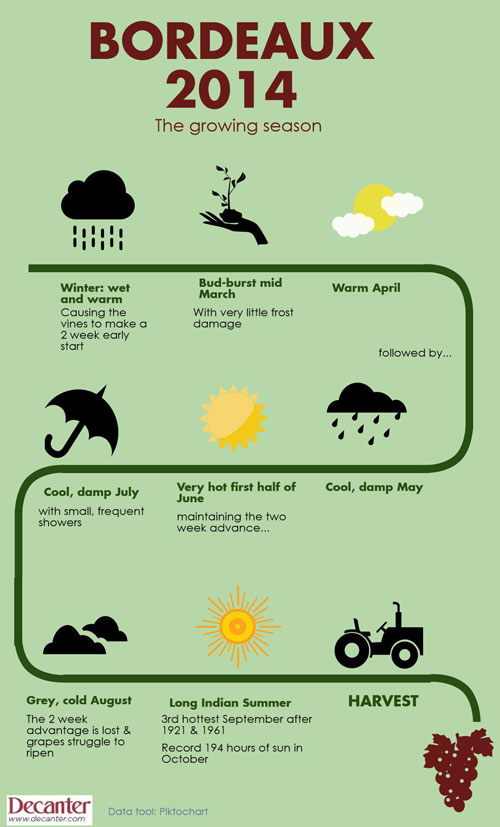 The beginning of 2014 went well for the vintage; a very wet and warm winter meant the vines made a two week early start and buds burst mid-March, with very little frost damage, said the Blatch report.

The warm April, followed by a cool, damp May meant that when the first half of June was very hot, the crop flowered fast and efficiently, maintaining the two week advance. Unfortunately, this was followed by a cool, damp July, with small, frequent showers and then a grey and cold August, delaying the ripening of the grapes and the loss of the initial two week advantage.

Luckily for growers, from the end of August until the end of October, it was very hot and dry, with occasional isolated thunder. Blatch said it was just the autumn that was ‘needed to save the vintage’. It was the third hottest September in Bordeaux after 1921 and 1961, and October had an all-time record of 194 hours of sun.

Several winemakers reported that those allowed the grapes to ripen well and without significant rot in the vineyards, which in turn raised expectations for the vintage overall.

Olivier Bernard, head of the UGC, described Bordeaux 2014 as ‘the vintage of the great Indian summer’. This week, from 30 March, some of the world's top wine tasters will get a chance to try the wines for themselves for the first time.