An inspiring back story to one of Tuscany’s most expensive white wines...

An hour’s boat ride out of the Tuscan coastal town of Livorno, the island of Gorgona looms into view, wooded hillsides rising up from the sea. As the boat draws nearer, you can see the sunshine glinting on the terracotta roofs of the buildings sprawled around the harbour, a cobbled path winding up from the small beach, and a diving platform built on to the end of the jetty.

A short walk up the hill brings you to the vegetable garden, where tomatoes, aubergines, courgettes, fennel and basil jostle for space, a stone’s throw from the pigsty. Cheese, bread and honey are produced here too, as it’s a long way to the grocery stores on the mainland.

But it’s not the idyllic Mediterranean setting and home produce that have attracted famous visitors that include actor Matt Dillon and the tenor Andrea Bocelli. It’s the very special white wine produced on the island, and the fact it’s a wine made by prisoners who have committed some of Italy’s most serious crimes.

Mentioned by Dante in The Divine Comedy, the island of Gorgona was established as a penal colony in 1869, and today houses 70 inmates who are in the final stages of a long prison sentence. The prison authorities receive dozens of requests from prisoners wishing to transfer to Gorgona. It’s quite a contrast to the overcrowded jail in Florence, where prisoners can be confined to their cell for up to 22 hours a day.

On Gorgona, prisoners are locked up only at night and work during the day. No physical boundary is necessary between the prison and the small village around the harbour, as inmates are aware of the consequences should they break any rules. The approach seems to work; the rate of recidivism here is 20% compared to 80% in prisons elsewhere.

The number of applications to transfer here has seen a noticeable increase since Gorgona became famous for its wine as well as its prison – even if the inmates aren’t allowed to taste it themselves. Vinified for the first time in 2012, the wine is the result of a partnership between the prison authorities and the Marchesi di Frescobaldi winemaking dynasty, which has been making wine for 700 years and today produces 11 million bottles on its six Tuscan estates. The 30th-generation president of the group, Lamberto Frescobaldi, recalls the email that kickstarted the whole adventure.

‘During the summer of 2012 we received an email from the Italian Penitentiary Department of Livorno. It had contacted about 100 wineries, seeking an active sponsor for a vineyard project to assist convicts in rehabilitation, and we replied to say we’d be happy to get involved.
‘When I met with the prison director at the time, Maria Grazia Giampiccolo, it was the first week of August, so we had no time to lose if we were to produce any wine that year. I asked her why she had chosen to work with us. She said, “You were the only winery to reply”.

Luckily they didn’t have to start from scratch, but it was a challenge nonetheless. A single hectare of vines had been planted in 1989, but became overgrown and was abandoned until 2008, when one of the inmates who had viticultural experience asked the prison director if he could try to rescue it. He managed to save the plantings of white Vermentino and Ansonica, as well as four rows of red grapes, and a wine was made in 2010 by another inmate, under supervision. The wine was awful, and the prison director realised they needed to call in the experts.
Today the vineyard is immaculate, and rows of healthy vines stretch across a natural, east-facing amphitheatre, thriving in the iron-rich, volcanic soil and sea breezes. Frescobaldi employs 15 workers in the vineyard and winery, with extra help at harvest time, paying them the same union pay as those working in Frescobaldi’s other wineries.

This is a major draw for inmates, who receive only a nominal salary for other jobs on the island. Not only does it mean they can more easily afford clothes and toiletries, but they have money spare to send home to their families. Equally importantly, they are learning a skill that will hopefully help them find work more easily on release.

‘I’d never been in a vineyard before I started working here,’ says one of the inmates who is busy picking grapes. ‘But I’ve worked three harvests at Gorgona and now I know enough to help train new pickers.

‘I get real satisfaction from seeing the wine in bottle, and I’m hoping to work in the vineyards in southern Italy where I come from after my release.’ Two former inmates have already gone on to work for Frescobaldi.

Lamberto Frescobaldi says that this sense of pride, and the dignity it gives inmates, is at the heart of the project’s success.

‘The quality of the wine is down to the fact that this is is a special place, and the place is slowly but surely being treated with more respect; it’s being cared for, and that participation brings a sense of worth.’

He recalls the time that he told the first cellarmaster, a Muslim called Samir, that he would be visiting in 10 days’ time with some guests and would like the cellar to be sparkling clean.

‘“I’ll need sunglasses”, I joked to him on the phone. He told me that he had just received a permit to go home for a few days, so I told him it was fine to delegate the work. But he cancelled his trip home, such was his sense of responsbility.’

Gorgona is now on its third cellarmaster, Luigi, after the second fell off a ladder and broke both wrists. Staff turnover is high, as it’s important that as many inmates as possible can benefit from the experience; this means continual training of new recruits.

The island, 18km offshore, can be cut off for days, even weeks at a time in bad weather. Frescobaldi staff visit regularly, and at harvest time one of the young winemakers moves on to the island for 20 days to oversee operations.

‘It’s a short window, and there are no second chances,’ says Frescobaldi.

The level of productivity is not as high as it would be elsewhere. ‘An inmate here will do in eight hours what our other vineyard workers would do in three. They aren’t accustomed to normal working after so long in prison, and we can’t expect the same level of efficiency,’ he explains.

The costs are also high – the company pays €13,000 a year to rent the vineyard (in Chianti Classico, you might pay €1,500), and there are further investments in equipment as necessary. ‘We had to buy tyres and a starter motor for the penitentiary 4×4, and pay for the tractor insurance,’ says Frescobaldi. Overall the investment is about €100,000 per year, for a total production of 4,000 bottles. Even if the wine does command €90 a bottle in Italy, it’s clear it doesn’t stack up commercially. 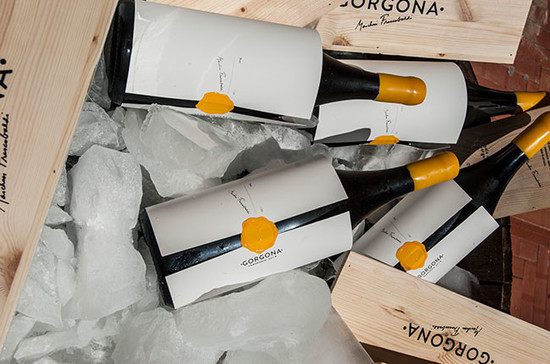 ‘Many other social projects have been attempted in prisons,’ Frescobaldi continues, ‘but if profit is the primary motive they are doomed to failure. You have to do it because you want to give something back to society.’

The icing on the cake is that the wine has turned out to be very good indeed. Frescobaldi has overseen the planting of an additional hectare of Vermentino next to the existing vineyard to increase production of the white wine, and this autumn will release a tiny amount of the island’s first red, mainly Sangiovese with a dash of Vermentino Rosso, from the four rows of red grapes that were preserved. Aged in amphorae, ‘it will be a jewel’, he says.

The white, which has been served to Pope Francis and Italy’s president among others, will be a hard act to follow. But such is the commitment of the management and workers to this project, and so special the place, that it’s hard not to believe him.