As the term 'minerality' becomes ever more fashionable, so the search for a definition gathers momentum. Sarah Jane Evans MW canvasses opinion from winemakers and researchers around the globe. 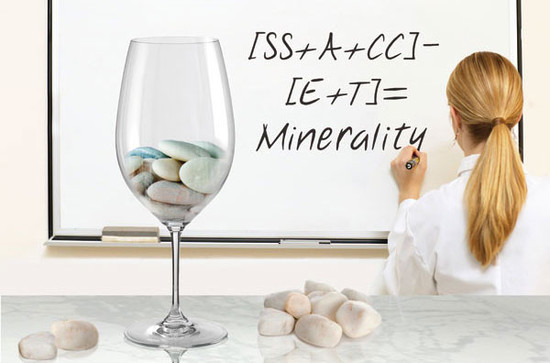 Wine vocabulary is a poor traveller. The words we use are notoriously culture specific, from damsons to rambutans, and wakame to barley sugar. Now there’s a new word popping up on wine lists and in tasting notes, causing confusion. While ‘minerality’ is a term that I find useful, there’s no definite view on what it means.

The wines being described as mineral are also generally described as ‘elegant’, ‘lean’, ‘pure’ and ‘acid’. They have a taste as if of licking wet stones and often a chalky texture to match. Some argue that it only applies to white wines, but anyone who has tasted a Priorat from the area’s llicorella (slate) soils will know it also occurs in reds. Some argue that you can smell it, most that it appears on the palate.

The assumption is that mineral wines are superior to ‘mass market’, New World, fruity wines. They have a romantic image, one that implies they are handmade by artisans and express the mystery of the soil, with the viticulturist as the magical mediator. Typical examples are found in Chablis, in Priorat, in the Mencías of Ribeira Sacra and Bierzo, and of course in Loire Sauvignon Blancs, and Rieslings from the Mosel and Rheingau in Germany, and Wachau and Kremstal in Austria. Note that these are European examples. This is not just a European character but it does seem more prominent in places where the wines show less fruit and more acidity.

The striking fact is that ‘minerality’ only started to make itself heard in the 1980s. It did not appear in Emile Peynaud’s The Taste of Wine (1983), or Ann Noble’s Aroma Wheel (1984), or indeed in The Oxford Companion to Wine (2006 – though it will be present in the 4th edition due out in 2015). Anecdotally, WSET students tell me that their tutors advise them not to use it in tasting notes. Yet it’s a fashionable term, well-established among wine aficionados.

Where does this obsession come from? Among many consumers, after all, a mineral ‘licked stones’ character is seen as negative. Has viticulture or winemaking changed? Or are we just being seduced by clever marketing? Many producers see it as an expression of the terroir, while some oenology experts put it down to compounds produced in winemaking. Whatever the origin, there is no agreed definition of minerality, but for many, myself included, it’s a very useful word.

Let’s start with what is known. The International Mineralogical Association defines ‘mineral’ as ‘an element or chemical compound that is normally crystalline and that has been formed as a result of geological processes’. So vines take up elements from the soil and this gives wines their distinct taste? Right? Wrong! The mineral elements in wine are tiny; only potassium and calcium even come close to 1,000 parts per million. There’s no question of tasting them. As a result, science gives the ‘mineral’ tasting note short shrift.

As Professor Dr Monika Christmann from Geisenheim University says, ‘There are lots of fairy tales, and a lot of wishful thinking. We can agree on salt and sweet, and can describe it, but there is no definition of minerality and as a result people interpret it very differently.’

Nevertheless, anyone who has ever stood in a vertiginous slate vineyard in the Mosel will believe the wine tastes of its origins. Roman Horvath MW, Domäne Wachau winery director, recognises the gaping hole between science and art: ‘On one side we know that the direct causal transfer of minerals from the soil to the finished wine is nothing we can prove. On the other side we observe varying styles of wines from different soils and geology.’

Laroche winemaker, Grégory Viennois, working in Chablis, makes wines that are clearly identified with minerality. He too recognises the lack of evidence: ‘Even if the specific markers, the molecules directly connected with the mineral aspect, are yet to be scientifically proven, the astute amateur or professional agrees with this terminology.’ Exactly. We see or imagine the stones or chalk or slate, and we can visualise the flavours.

Robert Weil’s Jochen Becker-Köhn says water transmits the terroir. The vine roots grow down some 5m until they reach impermeable rock. When they reach that barrier they take up the water that flows over it. The water releases compounds in the fine organic matter that coats rocks, and this is what the vines absorb – not the actual rock or stones, but the fine layer of organic matter.

Fortunately there are researchers worldwide seeking clarity on this. Dr Wendy Parr, based at Lincoln University, New Zealand has contrasted perceived minerality in Sauvignon Blancs in France and in New Zealand. Her research has taken in smell, taste and texture. Human reactions to taste are difficult to measure, but Dr Parr found consistent interpretations of minerality: citrus, fresh zingy notes, a flinty/smoky character, and a chalky note.

In Spain, Dr Antonio Palacios (no relation to Alvaro) of Laboratios Excell-Ibérica in Rioja, and David Molina of Outlook Wine in Barcelona, have been running a project analysing the chemical composition of wines that tasters have agreed show minerality.

During the research they found that tasters were easily suggestible. When they blindtasted a set of wines they had previously tasted, and were asked to identify the ones they felt were mineral in character, tasters mentioned ‘smell of stone’, ‘pebble’ and ‘flint’ when they had not used this vocabulary the first time round.

Palacios and Molina’s preliminary results suggest that the terms ‘terroir’ and ‘minerality’… ‘are not closely related to the level of mineral materials in the chemical composition of the wine, at least as the sole factor’.

Some believe firmly that minerality is a direct outcome of winemaking, and point to high levels of acidity and the absence of powerful aromatic compounds such as terpenes or fruity esters. ‘I love the term’, says Sam Harrop MW, winemaking consultant. He believes minerality expresses itself both aromatically and texturally. ‘Aromatic aspects from various complexed sulphides, and textural aspects from pH, acidity, complexity and to a lesser extent bitterness are likely [to be] playing a role here.’

Wines that have been through malolactic partially (not completely) – where the ‘appley’ malic acid is converted to the ‘milky’ lactic acid – have much much more mineral textural potential, he adds, because of the complexity of the acid profile. There’s a further acid to note: ‘succinic acid may well be the most important acid in the mineral debate, and like lactic acid it is winemaking-related. Higher levels of succinic acid are achieved in turbid, warm, spontaneous ferments,’ he says.

For Harrop, ‘Minerality perception is purely winemaking related… most wines that are reduced show more mineral potential.’ Many commentators suggest that sulphur compounds play a strong part, with the smoky, flinty character they can give. Harrop has a more inclusive view: ‘I’m not just referring to sulphides when I use the term reduction. A mineral texture seems more apparent in wines that have seen less oxygen during the process.’

The debate over the origin and definition of minerality continues. It’s disappointing for those of us who find it a very useful term. Fortunately Palacios and Molina give us a let-out in conclusion, as they are prepared to admit that there may be molecules that one way or another are a reminder ‘by olfactory and/or gustatory association of the world of minerals, although [the] soil or minerals that compose it do not have to be the single source of it’.

We await more evidence. For the time being we could express the mysteries of minerality in a playful formula: [SS+A+CC] – [E+T] – [O²] = Minerality where SS is Stony Soils, A is Acid, CC is Cool Climate, E + T are the fruity aspects of wine in Esters and Thiols, and O² is oxygen.

More briefly, look for wines that come from stony soils and cool climates, have marked acidity, are not overtly fruity and have not been much exposed to oxygen. If you enjoy this style, this may be a useful shorthand for finding it.

Minerality may have arrived suddenly in our tasting notes but it will take longer for science to explain it. And even longer, says Molina, to convince ‘the romantics’. In the meantime, as one of these romantics, I will continue to use it. Tasting notes are all about metaphor and transferred ideas, and minerality is a word that works.