Garnacha has always gone under the radar, overshadowed as it is by Spain’s star Tempranillo wines. So why is it the grape on everyone’s lips now? Sarah Jane Evans MW investigates... 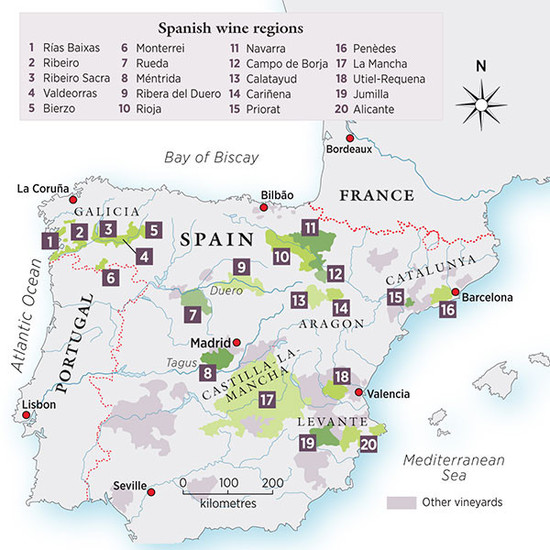 A mix of soils, but limestone is important. Especially successful in Rioja Baja, particularly Monte Yerga and Tudelilla. Wines offer supple red fruit. Successful ageing in American or French oak and blending with other Rioja varieties.

Priorat: mixed brown and blue slate soils as well as clay. Bold wines with tannins, often showing pure mineral influence and frequently blended with Cariñena. Wines are typically aged in French oak rather than American, but amphorae and concrete are also used.

Montsant: try the wines of Acústic, Espectacle and Alfredo Arribas – both white and red.

For far too long Garnacha was Spain’s wild child. It was the unruly teenager the family had to put up with, but tried not to bring out in public. Just take a look at it now. That naughty child has turned into a cool and stylish adult. Suddenly everyone wants a part of the Garnacha action.

And the word is Garnacha, take note. This variety may be the same as France’s Grenache, but Spanish Aragón is the grape’s homeland.

So what is it about Garnacha that made it such a reliable workhorse across so many parts of Spain? For a start, the bush vines are sturdy, wind-resistant, long-suffering, capable of putting up with dry conditions better than most. It’s also reasonably resistant to oidium (powdery mildew), though it is sensitive to millerandage (uneven-sized berries). It has a long ripening cycle which, combined with high-altitude vineyards, can make for fine elegance. It produces sugar easily and in former times this ability to make alcoholic wines was a real advantage. Cheap and cheerful was its charm.

But attitudes have changed. As Tom Puyaubert of Bodegas Exopto in Rioja expresses it: ‘Garnacha is the most challenging variety in the winery. It changes – and it can turn into a candy shop.’ It’s that potential sweetness that caused Garnacha to lose favour; it can be just too heartily alcoholic. It was also widely spurned by collectors and sommeliers because it made wines that were pale in colour and that oxidised readily. Yet that pale colour is superb in the new generation of lightly coloured but full-flavoured rosados. And that ease of oxidation, which can be avoided with care in the winery, makes for the glorious rancio flavours.

Navarra had a great and honourable history of reds and rosados in Garnacha. Up to the end of the 1970s it was 90% of the Navarra vineyard.

Yet the DO turned itself over to Cabernet Sauvignon and Merlot to give it a point of difference from its neighbour Rioja. Thus there are only isolated parcels left. If there’s one part of Garnacha’s history that has a tragic aspect, then it’s Navarra; in just two decades, plantings have slumped from 24,000ha (hectares) to just over 3,000ha.

The first winemakers in modern times to put over a clear, contemporary message about the variety were the pioneers in Priorat. While Navarra was still denouncing Garnacha, the gang of five who took the first steps in reviving Priorat found the variety was key to their wines. They blended it, first with international varieties and later with Cariñena. Garnacha is still the dominant variety there today.

The wild child has always had a part to play in the classical wines of Rioja, though as a lesser partner. Garnacha had the benefit of lowering a wine’s pH; a tweak of Garnacha could also be guaranteed to supply the generosity and the fruit. A wine such as La Rioja Alta’s Viña Ardanza typifies that classic approach, though in this case the blend includes 20% Garnacha, rather than the more typical 5%. Ardanza’s Garnacha comes from the favoured site of Tudelilla in Rioja Baja.

Two important areas remain. First around Madrid, north and west to the Sierra de Gredos; and second its birthplace of Aragon. The Gredos mountains offer a network of valleys and slopes, aspects and gradients and are part of Spain’s history of abandoned vines. A key figure in this story is Telmo Rodriguez, who has been behind the recovery and revival of vineyards and wine styles from Malaga to Rioja. ‘I bought vineyards back in the late 1990s near Cebreros,’ he recalls. And with that he triggered a form of viticultural gold rush.

Let’s wind the clock forward to the present, and start with the home of Garnacha: Aragón. Here – in the DOs of Calatayud, Campo de Borja, Cariñena and the newer IGP of Valdejalón – young, honest Garnacha can be at its most delicious. This industrious region, dominated by co-operatives, is a popular hunting ground for retailers looking for the best-value wines in Europe. Pierre Mansour, head of buying at The Wine Society, says: ‘If my customers are looking for young Spanish reds, I tell them to buy Garnacha. It’s much more pleasurable than young Tempranillo.’

The producers’ focus here has to be on raising the variety’s reputation. While it may be a treat for the consumer, it’s hardly sustainable to be known for producing Spain’s best cheap wines. Of the three, Cariñena is currently the least exciting region, though winemaker Jorge Navascués and his father Javier, are the ones to watch, both here in Cariñena and in IGP Valdejalón.

Campo de Borja is the self-proclaimed ‘Empire of Garnacha’. It is engaged on a terroir study, which could certainly assist with the definition of quality. Summers are hot here.

Fernando Mora, who runs his own project, Frontonio, based in nearby Valdejalón, says the work begins in the vineyard: ‘It is essential to avoid sunburned grapes.’ Like winemakers across the country, Mora likes to use concrete vats for fermenting, as ‘it makes for a more elegant profile than new oak’.

Mora is an enthusiast for his DO: ‘Garnacha will work wonders in the future here,’ he insists. Indeed, the best wines from Campo de Borja are really promising, and it is the people making the wines who will get them known.

The Garnachas of today are all about personality. The variety is a calling card for the new generation of Spain’s young growers and winemakers. They tell their own, or their vineyard’s, life stories on the label. They have travelled, made wine around the world, and are ready to question received wisdom.

One winemaker who fits that bill is the Scottish-born, New Zealand-qualified, Calatayud-resident Norrel Robertson MW, self-styled El Escocés Volante, or Flying Scotsman (as in flying winemaker), who has plenty of views, boldly expressed on his labels. From the roughly translated ‘Needs Must’ and ‘Stick to Your Guns’, the names of his Garnachas hint at the debate he has had with the wine regulators.

Robertson is one of the original international consultants who have done so much to raise the quality of Aragón’s wines. The difference is that he is the one who chose to stay. As he buys up old vineyards and new concrete eggs, there is plenty of promise, and he can be sure to gain attention for the variety, as well as for his wines.

To the west, in Rioja, the traditional role of Garnacha as ‘seasoning’ in a wine blend is changing. Winemakers and marketeers have caught the single-varietal disease, and a number of producers – big brands and small – are bringing out their own versions. Look to Baigorri, Campo Viejo, Contino, Ramón Bilbao as well as Sierra Cantabria. Also Alvaro Palacios, whose work at the family winery of Palacios Remondo is returning Rioja Baja, the subregion that has excellent Garnachas, to its deserved pedestal.

The new generation doesn’t necessarily do away with all the old ways, though. Further east, in Laguardia, in his garage (hidden away, like many of the new generation, within a trading estate) Frenchman Tom Puyaubert sees his Bozeto, a predominantly Garnacha blend, as his ‘tribute’ to Garnacha. ‘It reflects the old way of winemaking, when the growers made their own Garnacha,’ he says. ‘I ferment in large concrete vats, and totally destem, but I don’t crush.’

Another couple who were drawn to old bush vines are Elisa Ucar and her husband Enrique Basarte in Navarra. They came from career backgrounds in wine and recognised the outstanding quality of the vineyards in Navarra that were so rapidly disappearing. At Domaines Lupier, they make just two wines, La Dama and El Terroir. The couple’s pure expression of Garnacha has gained attention in the international arena, and raised the profile of their region. When I ask Ucar if they were always intending to work with Garnacha, like so many of today’s ‘Garnachistas’, she demurs, saying simply: ‘Enrique and I found something exceptional in these vines, and we had to rescue the parcels before they disappeared entirely.’

To better understand Garnacha, it’s always illuminating to talk to the converts. Ricard Rofes, for instance, now a real expert in the variety, came to Scala Dei in Priorat from nearby Montsant in 2007. His expertise was in Cariñena. Ten years on, he’s more than comfortable. He manages 40 plots in all, some on sites planted long ago by the long-departed Carthusian monks. The ancient building that contains the Scala Dei winery has an array of small and large tanks, as well as concrete lagares. The open tops to the fermenters are a straightforward device to blow off the alcohol.

For anyone interested in Garnatxa – the Catalan spelling on the label of this Catalan winery – his trio of bottlings is a delight. Three separate wines from three separate vineyards, each on different soils: St Antoni (clay at 600m), Artigots (boulders at 550m) and La Creueta (schist at 500m). One of the most interesting things learned from the tasting is that slate is not always the best in Priorat.

That’s the astonishing transformation of Garnacha – from a naughty child in a sweetie shop, through the awkward teenage years with rough edges, to the trendiest variety in Iberia. Now it’s confidently grown up, with growers and producers dedicated to singing its praises to an increasingly receptive global audience.

Sarah Jane Evans MW is co-Chair of the Decanter World Wine Awards, a member of the Gran Orden de Caballeros de Vino and Spanish Wines Communicator of the Year 2013 & 2015 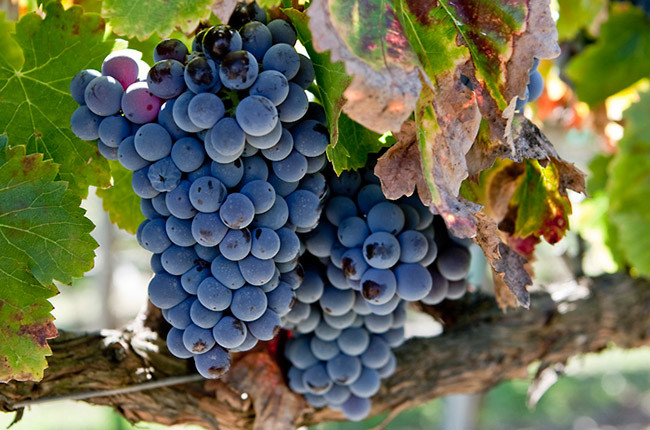 The Grenache Quiz – test your knowledge