From avant-garde architecture to outdoor pursuits and culinary delights, this area of northern Spain is a traveller’s paradise. 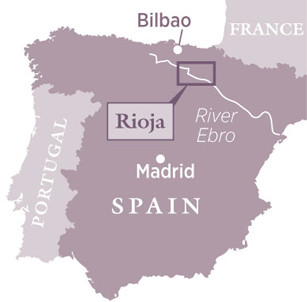 It is a truth universally acknowledged that the world’s great wine regions are approached through severe traffic, industrial suburbs and roads lined with warehouses selling furniture. Bordeaux is a classic example. Rioja, thankfully, is a rare exception. True, the first part of the drive from Bilbao airport involves crossing the city, but this can be done at high speed on a motorway that fairly quickly yields to rolling green hills.

The hills soon turn to mountains, for Rioja runs west to east along the River Ebro, and is bounded on the north by the Sierra de Cantabria, and to the south by the Sierra de la Demanda and the Sierra de Cameros. Through the middle runs the Ebro. The result is a wonderfully craggy landscape where snow can linger in the background quite late in the season, while along the river plains the vines bask in the sun. The Romans found the local Celtiberian peoples already making wine when they arrived.