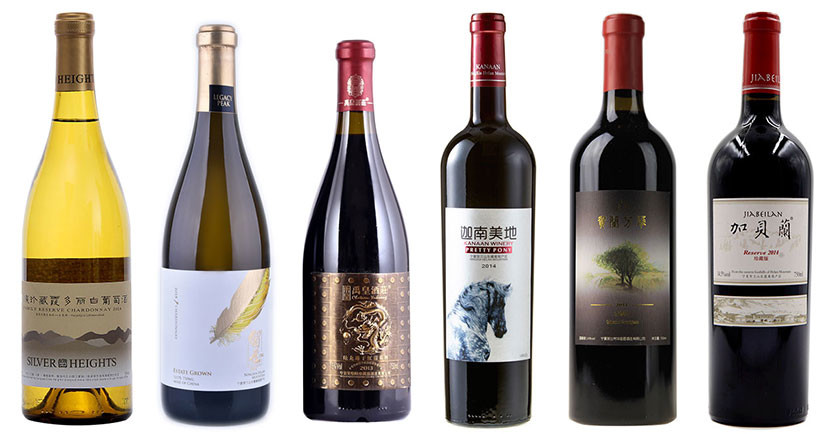 Jump to the 2020 report on the latest of Ningxia wines on Decanter.com: 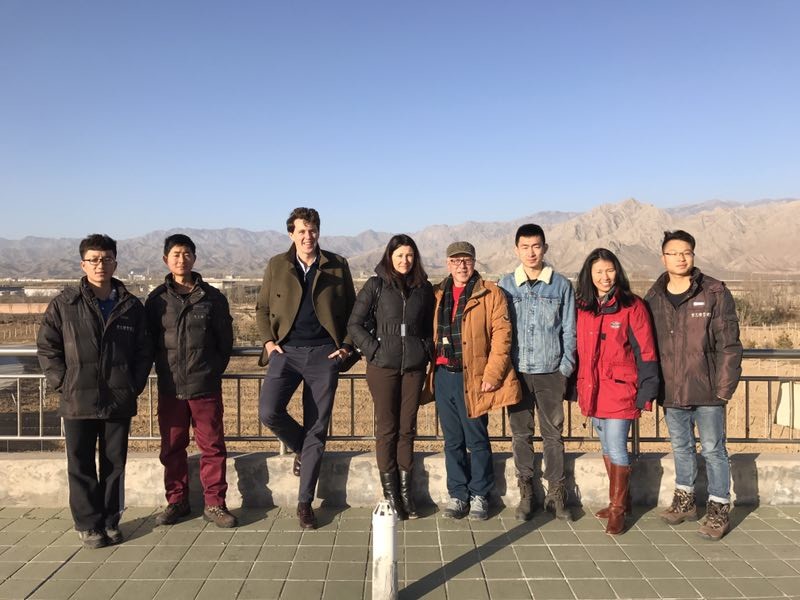 A visit to Ningxia

It was the day after our Decanter consumer event in Shanghai: A ridiculously early start for Richard Morley and me with alarms set for 3am and we were on our way to one of the most important wine regions in China: Ningxia.

Ever since Decanter made history in 2011 with a Chinese wine winning a Decanter World Wine Awards International Trophy, I have been intrigued to learn more about the Gobi desert that has been transformed recently and rapidly into the finest wine region in China.

As the plane touched down two hours west of Beijing, it didn’t surprise me why many people in the wine trade compare it to Mendoza in Argentina: semi-arid desert sitting at the eastern foot of the picturesque Helan mountain range, at an altitude of 1200m above sea level and with an annual rainfall of 200mm. Even some wineries, Château Yummo to name one, are reminiscent of Mendoza winery architectures.

Here, though, Malbec has been swapped for fellow Bordeaux varietals Cabernet Sauvignon and Merlot; being the two most popular varieties planted and accounting for most of the blended wines.

The first winery saw the light 20 years ago, and today Ningxia has 100 active wineries with 80 in construction and 50 that have applied for the warrant. Approximately 32,000 ha of vineyards are planted but this is expected to double in the next five years. 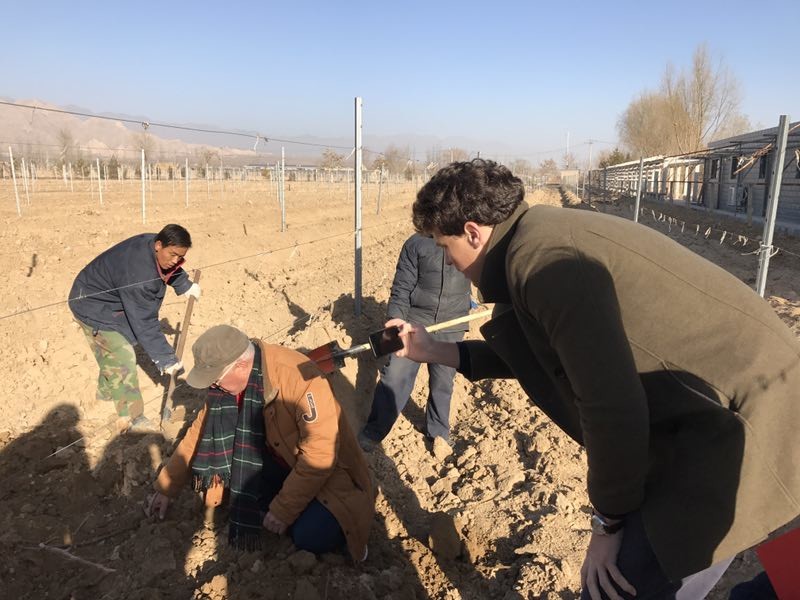 What sets Ningxia apart from the rest of the world is the extreme climate, which is also its biggest challenge. I haven’t come across any wine regions where the temperature goes from the extreme high of 35°C and down to -27°C at the peak time of the respective seasons.

No vines would normally survive the freezing winter and for this reason they have to be buried from October to April below 20 to 30 cm of top soil, keeping the moisture at 60% to 70%.

This is not a new process; the same method has been applied to table grapes for more than 700 years. It is time-consuming and not a cheap process, taking 150 people to do 35 hectares in 1.5 weeks.

For any vineyard owner, including myself, this is an ‘alien’ process and so brutal on the vines. Indeed, each year they lose 5% of the vines and as they get older - the trunks snap when they bend them - resulting in a life expectancy of 25 years; I guess we will never have the pleasure of tasting old vines wines from Ningxia. 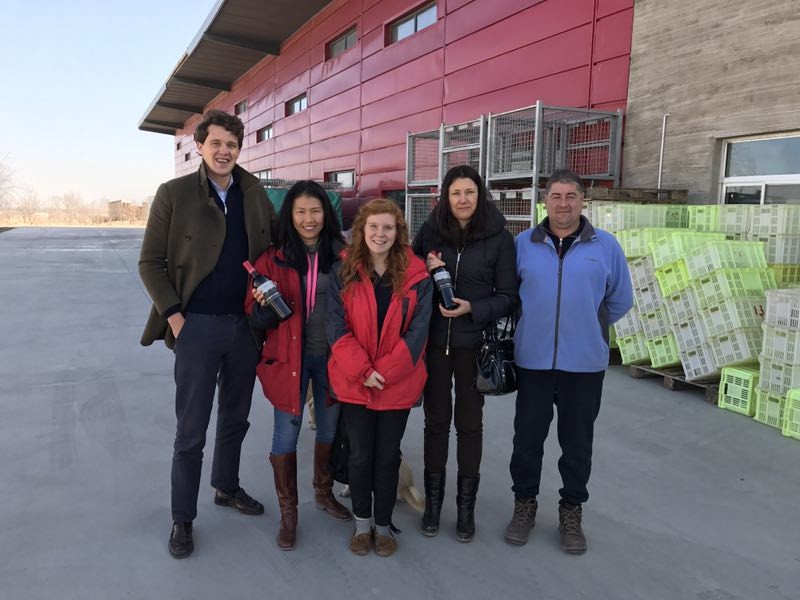 How does it translate in the glass?

With an average alcohol content of 13.5%, they are much lighter and not as concentrated as most Cabernet wine regions.

In fact, the wines tend to be light with soft tannins and moderate acidity, but with that trademark herbaceousness that can have the marmite effect on people: love it or hate it.

One of the biggest challenges is to pick the grapes at the optimal time during harvest and this is not an easy one to fulfil when most harvest dates are decided by logistics rather than grape maturities.

If picked too early, the phenolic won’t be ripe, resulting in green characteristics; if picked too late the acidity will drop, which explains why many wineries have to adjust the acidity during winemaking.

In fact, as a general observation the wines seem to be made in the winery rather than in the vineyard. During my trip many questions related to vineyard management were left unanswered. It may be due to a ‘lost in translation’ effect or perhaps the locals still have little understanding of this subject.

To be fair, most vines are only five to six years old, so they have little experience to date. The exception being Legacy Peak, which has the oldest planting of Cabernet dating back 17 years,.

Time will tell but most importantly the land is owned by the government, and is on a short-term lease; so why would producers invest in their vineyards when they could lose them at any time? Ningxia may be China’s answer to Bordeaux. Whether Bordeaux varietals are best suited to the region is debatable, but most importantly Ningxia winemakers need to find their own identity.

Outside Cabernet Sauvignon and Merlot, I was charmed by Cabernet Gernischt, better known as Carmenere, which tends to have bright, fresh and crunchy red fruits, with some herbaceous, black pepper and violet aromas and soft tannins.

Could Cabernet Gernischt become to Ningxia what Malbec is to Mendoza? Mr Rong from Helan Quingue Vineyard doesn’t think so, because it is prone to leafroll disease and obviously hasn’t got the same reputation as Cabernet Sauvignon.

Other surprises were Syrah and also Marselan - a cross between Cabernet Sauvignon and Grenache Noir - plus Chardonnay.

Cabernet Franc could also have a future, but while planting is increasing it is still mostly used for blending with Cabernet Sauvignon. Hopefully with time we will start seeing single varietal examples.

Welschriesling, known as Italian Riesling in the area, as well as straight Riesling,are also found but they often missed that backbone acidity.

Château Yummo is also experimenting on the German grape Dunkelfelder. The 2016, which is still in tank, really seduced me. It’s not pretending to be complex but is pure pleasure in the glass, like a Beaujolais on steroids. The local wineries normally blend it with Cabernet but let’s hope they keep some on the side for single varietal release.

Most Riesling from Ningxia is actually Welschriesling, or Italian Riesling as they call it. But this little number is the real thing, and shows great expression of the variety. This is more of an Austrian style, rather than that of Alsace or Germany, although the acidity is not quite on the same level - but it is still an impressive example. Aromas of lemon blossom, grapefruits and stone fruits come to mind. It is dry, elegant and zesty on the palate.

After being fermented in stainless steel, this Chardonnay then spent 9 months in barrels, of which 30% are new. As well as being in contact with the lees, which gives a lovely textured mouthfeel. Ripe apple, pineapple and pear characters dominate the nose and palate, with a pleasant freshness on the finish.

Currently 45 hectares from six year old vines, although they have plans to plant an extra 25 hectares. This is their first attempt to make a white, and the result is pretty impressive. In fact it wouldn’t be out of place in a Burgundy line-up. A sophisticated style displaying ripe apple and pear fruit aromas. On the palate it has a lovely buttery and creamy texture from the oak, with balanced ripe fruit and fine acidity to keep it alive and fresh. Only 300 bottles were made - so a very rare find.

This 22 hectare property has the oldest planting of Cabernet Sauvignon - almost 20 years old - and has the highest altitude vineyard at 1246 metres above sea level. They only use grapes from their own estate and this Chardonnay is bursting with pineapple and pear flavours. Lovely texture from the oak but well-integrated, and the tropical fruit is mirrored on the nose. Quite a forward, yet vibrant, style.

This winery is owned by the Cofco group, probably more known for its Great Wall wine brand. Today, they have 300 hectares, but are planning to plant an extra 1000 hectares in the next two years. They planted their first vineyards in 2010, and they made their first vintage in 2012 from purchased grapes. This 80% Merlot and 20% Cabernet Sauvignon blend displays plum and spice flavours with some herbaceous tones. This is a full-bodied style with the fruit concentration of the new world and hint of sweet spicy oak, which is well-integrated. Tannins are mellow and just enough acidity to hold it together with a green pepper finish.

Ho-Lan-Soul winery is owned by Chen Deqi, a Thai-Chinese investor who owns the largest organic vineyard in the region. Some of the Syrah trademarks are found here; while the black fruit aromas dominate, subtle smoky and meaty notes are also present. This medium-weight offering is soft and juicy, balanced by firm tannins and pronounced toasted oak. A touch minty on the finish.

This 150-hectare estate was built in 2001, with the first production year in 2002. The wine is a blend of 60% Merlot, 40% Cabernet Sauvignon and displays perfumed blueberry aromas with some violet. Fresh and elegant, this is a delicate style with layers of red cherry fruit characters and a smooth finish.

A restrained yet energetic nose, which shows similarity to the Old World style; blackcurrant and herbal flavours are in harmony with the soft medium-bodied palate and the well-integrated oak. A complex and classy wine that has a nice freshness on the finish.

With its first vines being planted in 2001, this is one of the oldest estates in the region, despite only being built in 2010. This is Ningxia’s signature grape, also more commonly known as Carmenere. The wine displays primarily blueberry, blackberry, black plum and some lifted floral scents. Delicately spicy on the palate, with a certain purity of bright fruit concentration. Overall it’s wrapped up by a complex structure, with a touch of cloves and cinnamon spice from the oak. Only 3000 bottles are produced, this is in high demand despite the steep price tag.

Managed and run by the daughter of Mr Wong, the man behind HeLan Quingue Vineyard. After studying in Germany and hearing encouraging feedback from her father’s wine, Wang Fang (also known as Crazy Fang) has come back to her roots to follow her father footsteps - and start her own project. Her winery was built in 2011, and now has 20 hectares. Predominately Cabernet Sauvignon with a dash of Merlot, the style is quite restrained with some blackcurrant, pepper and dried spice aromas. Medium-weight, it has a beautiful structure with a nice texture from the second hand oak she uses. It’s a very pleasing and charming style that’s quite feminine too.

This was the last wine I tasted on my trip, and I’m glad I did. This beauty is impressive and displays classic Cabernet flavour, with notes of redcurrant and blackcurrant - with a pleasing herbal hint which keeps the palate alive. From its blend of 80% Cabernet Sauvignon with some Merlot it has layered depths, but it’s also elegant, pure and balanced by a bright black cherry character. Very stylish and deliciously gorgeous.

This cuvée made history six years ago by winning the DWWA international trophy for their 2009 vintage. It is predominantly Cabernet Sauvignon, blended with 15% Merlot and 5% Cabernet Gernischt. Only 50% of new oak is used and the result is fresh and elegant, with classic cassis aromas and some herbaceous notes. This is probably the most stylish wine I tasted from Ningxia; it has the finesse and structure of the Old World, but with the richness of fruit from the New World.