In 2002, archaeologists working at a site carbon dated back to 4,000 years stumbled upon a find that proved to be as earth-shattering as the sudden and violent earthquake that helped, ironically, to preserve it. 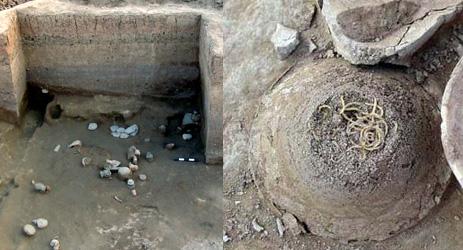 Buried beneath 3 metres or 10 feet of sediment in Lajia in Qinghai province (Image 1), the ancient inhabitants of the Qijia culture in the late Neolithic age had no forewarning of Nature’s tectonic upheaval nor the subsequent surge of water that would have swept everyone away following the earthquake.

With the passage of time, everything dried up. And it was a cover up, literally, that helped preserve the brittle stringy treasure.

The fist-size clump of noodle survived 4,000 years because the bowl it was in was turned upside down (Image 2). Underneath the noodle was an inverted cone of clay which sealed the upside down bowl, blocking out air from the noodle, trapping and embalming it for posterity.

The small pile of noodle – about 20 inches or 50 centimetres in length - resembles today’s lamian (Image 3).

The entire community was believed to have been destroyed by the earthquake. The natural catastrophe wiped out the Qijia Culture of the late Neolithic era about 4,000 years ago.

The archaeological team is of the view the site was abandoned in great haste, as witnessed by the helter-skelter placement of the skeletal remains of the humans. The team also believes that the violent earthquake was followed by massive flooding of the river valley in the same way that a tsunami might produce the same effect along coastal communities. So taken by surprise, there was no chance for the inhabitants to escape to higher ground.

ANCIENT LAMIAN FROM MINHE COUNTY, QINGHAI
The Lajia archaeological site is in today’s Minhe County in the province of Qinghai.

Lajia is some 30 kilometres southeast of the capital Xining in the Huangshui River Valley near the present-day city of Haidong, which has a population of about 1.5 million.

At the time of the find in 2002, after taking some photographs, the archaeologists took the bowl and the noodle to their laboratory in Beijing. No scientific analyses was made of the finds until two years later.

In 2004, Professor Lu Houyuan of the Institute of Geology and Geophysics of the Chinese Academy of Sciences received information of the noodles from Dr. Yang Xiaoyan, a member of the research project of the Lajia site.

Professor Lu took parts of the remains of the noodles for phytolith and amylum analyses. The tests examined the starch grains and microscopic mineral particles that form in plants.

The findings yielded a surprise.

Unlike modern noodles, the ancient ones were not made from wheat. Instead, they were produced from millet which, along with rice, had formed the foundation of agriculture in ancient China. After comparing the results with the phytolith and amylum of 85 species of plants, Professor Lu confirmed the noodle was made of foxtail millet and broomcorn millet.

Though wheat is the most common crop in noodle making in China today, millet noodle is still made in some rural villages in north China.

Speaking to the American website livescience.com, Professor Lu said that, ‘Archaeological evidence suggests that even though wheat was present in north western China 4,500-5,000 years ago, it wasn't commonly cultivated until much later. It took a long time for wheat to become successfully naturalized in China. It gradually spread from north-western China to the east and to the south of the country.’

It was only much later, during the Tang Dynasty (618-907) and the Song Dynasty (960-1279), that wheat began to catch on with people in China, finally becoming the second largest staple grain crop after rice.

Although the finding that the noodle was made from millet was unexpected, it is actually reassuring.

SEPARATE, INDEPENDENT ARCHAEOLOGICAL DISCOVERY IN SHANXI
The earliest grinding stones known to humankind have been found in Upper Paleolithic archaeological sites around the world.

Professor Liu Li of Stanford University, in a report published in May this year of the US National Academy of Sciences, revealed that three grinding stones were discovered at a roughly 19,500 to 23,000 year-old site in Jixian County, Shanxi. Prior to her findings, agriculture in China was only dated back to about 11,000 years.

The grinding stones were used to process seeds and tubers. Professor Liu believes that the practices evolved independently between different parts of our world, possibly as a global response to a changing climate as our planet emerged from the ice age.

The grinding stones were used as a pair of stones. Typically, a handheld stone would be rubbed against a larger flat stone laid on the ground in order to process wild seeds and tubers into flour-like powder.

Traces and residue of starch grains on the used surfaces of the grinding stones were analyzed and they revealed the types of plants processed by their long departed owners (Image 4).

The starch analyses of the stones showed traces of grasses, beans, a type of yam, snakegourd root and wild millet seeds, the same types of food that people in the region would domesticate thousands of years later. Domesticated millet, in particular, became the main staple crop that supported the agricultural basis of ancient Chinese civilization.

CONCLUSION
As was mentioned in the first part of this two-part article, the first reference to Italian pasta dates back to 1154 in Sicily. Pasta is made from durum wheat which was introduced by Libyan Arabs during their conquest of Sicily in the late 7th century. It is more than likely that it was the Arabs who introduced pasta to Italy because dried pasta was being produced in great quantities in the Sicilian capital Palermo at that time, namely 1,300 years ago.

On the other hand, from the archaeological discovery in Lajia in Qinghai province in 2002, there is now evidence that noodles were already produced in China from millet 4,000 years ago in the late Neolithic age.

Stanford University’s Professor Liu Li separate, independent discovery of wild millet seeds from the three grinding stones from the archaeological site in Jixian County, Shanxi, dated to between 19,500 and 23,000 years, further confirms that millet has been a food source in China since very ancient time.

Perhaps Chinese noodle is even older than 4,000 years old. For now though, that’s old enough to confirm that it was China who first introduced noodles to the world.

PAIRINGS WITH NODDLES
If noodles are cooked on their own, they can be paired with white, rosé or red wine.

Once we start adding other ingredients to it, the complexion of the wine pairing changes. So, for example, if you stir-fry noodles with seafood, a white wine would be an ideal pairing. On the other hand, if chicken or pork were cooked with noodles, then a white, rosé and red can be a good match since those two are white meats. On the other hand, if noodles are stir-fried with beef, a red would be the perfect pairing.

These are:
Chaozhou (Teochew) • Fried Kwei Teow at Page 54

Captions for the images:

Image 1: The bowl of noodles was buried beneath 3 metres or 10 feet of sediment in Lajia in Qinghai province.

Image 2: The fist-size clump of noodle survived 4,000 years because the bowl it was in was turned upside down.

Image 3: The small pile of millet noodle – about 20 inches or 50 centimetres in length - resembles today’s lamian.

Image 4: Professor Liu Li (left) of Stanford University and an assistant taking traces and residue of starch grains from the 19,500 to 23,000 year old grinding stones. 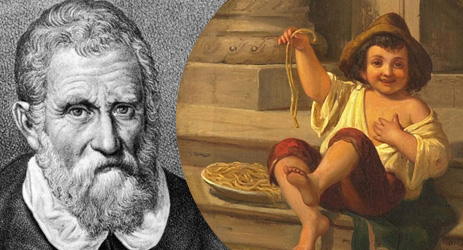 Pasta or noodle, which came first