- This estate has run through the whole gamut of names; called at various times Chateau Mouton d’Armailhac (for most of its pre-Rothschild life), Chateau Mouton Baronne Philippe (1956-1973), Mouton Baronne (1974-1978) and Chateau Mouton-Baronne-Philippe (from 1979-1988, in honour of Baroness Pauline, Baron Philippe’s wife). It took its current name from the 1989 vintage.

- Pauillac has more fifth growths than any other Médoc appellation – 12 of them in total, almost one-fifth of the Médoc’s total classified wines. Two belong to Baroness Philippine de Rothschild – Armailhac and Clerc-Milon.

- Nearly 20% of the surface area of the vineyard is planted with vines dating back to 1890.

- The chateau building at Armailhac is famously only half-finished. Its build started in 1810, then ground to a halt due to lack of funds around ten years later. Its extensive outbuildings however contained all the technical and agricultural equipment for both Armailhac and Mouton for years, until the recent renovations at Mouton itself.

Most notable previous owner: There has only been one other family owning this property besides the Rothschilds, and that’s the Armailhacqs (or their descendents). Of this family, it was probably Armand d’Armailacq who did the most to improve winemaking on the estate. He was an engineer and member of the Academy of Science, and was responsible for upping quality to Fifth Growth status in the decades running up to 1855. This was also the same Armailhacq who wrote an extensive treatise of winemaking in the Médoc, including his own suggested classification of chateaux. 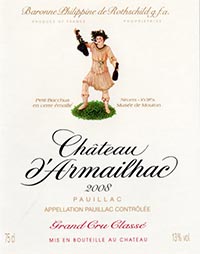 The first mention of the brothers Dominique and Guilhem Armailhacq, who were shippers in Bordeaux and owned plots of land in Pauillac, dates back to 1680. By 1750 documents appeared detailing 16 hectares of vineyards planted by Dominique Armailhacq. During the 18th century, the family vines spread up to 52 hectares, and by 1831 the estate was known as Mouton d’Armailhac and its wine was selling for twice as much as its neighbours (as well as making two qualities of first and second wine). 15 years later, in 1844, the family was in deep debt, and Madame D’Armalhacq sold off part of the vineyard – Les Carruades de Pouyalet – to Lafite. Mouton d’Armailhacq was classified as a Fifth Growth in 1855, and its owner Amand d’Armailhacq published a book of vinegrowing in the Médoc (and mentioned in it that Mouton Rothschild was worthy of a First Growth ranking). In 1878, the estate passed to the son-in-law of the Armailhacq family, Count Adrien de Ferrand – he bought out the other inheritors to become sole owner. In 1931, finances were again causing problems, and the Count de Ferrand created a company, the Société Anonyme du Domaine de Mouton d’Armailhacq. His neighbour, Baron Philippe de Rothschild, became a minority shareholder, and then two years later, in 1933, bought all the shares in return for a life annuity for the Count de Ferrand. He died just a year later, and Baron Philippe became the sole owner of Armailhacq – continuing until 1988, when it passed to Baroness Philippine.

Consultant: Jacques and Eric Boissenot, with Philippe Dhalluin as technical director at the estate.

Plantation and vineyard work:Cabernet Sauvignon (57%), Merlot (21%), Cabernet Franc (20%), Petit Verdot (2%), average age 46 years, planted to 10,000 vines per hectare. Satellite imagery is used in the vines to isolate different zones, and each grape is looked after according to its age, its variety, its soil, its microclimate, and the needs according to the soil in which it grows. The density is at 10,000 plants per hectare. Winemakers are responsible for their specific plot from pruning to training to green harvest – as is traditional in the Médoc. Picking by hand, with full destemming of the grapes.

Vinification: average age 46 years, planted to 10,000 vines per hectare. Satellite imagery is used in the vines to isolate different zones, and each grape is looked after according to its age, its variety, its soil, its microclimate, and the needs according to the soil in which it grows. The density is at 10,000 plants per hectare. Winemakers are responsible for their specific plot from pruning to training to green harvest – as is traditional in the Médoc. Picking by hand, with full destemming of the grapes.

Terroir: An extension of the Carruades de Mouton plateau, the Plateau des Levantines and the Plateau de L’Obélisque, made up of light and deep gravelly soil. Another section of the Plateau de Pibran has a clay-limestone base, covered over with gravels. A final part of light gravels up to three metres deep lies on the Croupe de Béhéré.

There have been significant improvements in wine quality over the past decade, with modernisation in the vineyard and cellar and increased use of new oak.