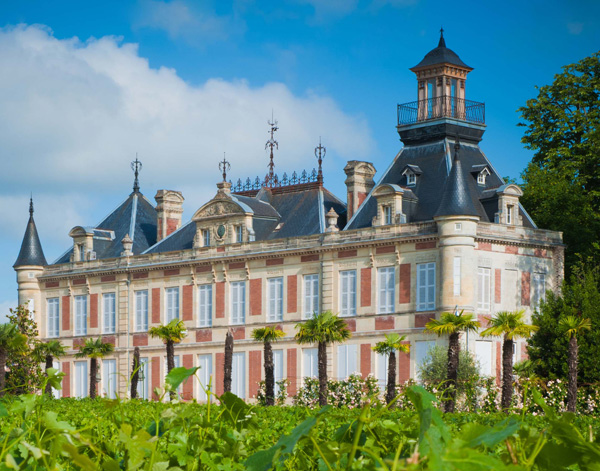 Location: AOC Margaux, in the village of Margaux itself, opposite the post office and next to Chateau Ferriere.

Production: 15 hectares, producing around 8,000 cases of the main wine, and the same again of the second wine.

- Chateau Marquis d’Alesme is currently building a new winery, due to open in 2015. Owner Nathalie Perrodo is incorporating nods to her Chinese roots by suspending a dragon’s tail, with 22,000 bronze scales, from the roof of the winery to bring good luck. Water, earth and sky motifs will also decorate the concrete walls, built in no-nail techniques like the Temple of Heaven in Beijing, and a Moon Door will guard the entrance.

- The Zuger family, former owners of Marquis D’Alesme, still live in and own the chateau building itself, but the Perrodo family in 2006 bought the vines, the land, and the rights to both the name and the use of the chateau image on their labels.

- The label has recently changed, as the previous upside-down horseshoe was felt to symbolize bad luck. ‘It had been the chateau’s symbol for such a long time that it was a tough thing to change,’ said Nathalie Perrodo. ‘But I felt it was essential.’

- Although seen to struggle for much of the 1980s and 1990s in terms of quality, heavy investments are now ongoing – in the vineyard alone, 40% of the vines have been replanted since Nathalie Perrodo took over in 2006.

- A largely female team runs Marquis d’Alesme. Not only is the owner 31 year old Nathalie, but the managing director, commercial director and financial director are all women. Nathalie lives in London but flies over to Bordeaux every few weeks, and is very present on the estate.

Current owner: Nathalie Perrodo is daughter of businessman Hubert Perrodo who bought the estate in 2006 but tragically died shortly after. Nathalie took over the family wine properties at the age of 24, while her two older brothers still work in the family’s steel and oil business. Perrodo’s father was French, but her mother is from Hong Kong, and Nathalie speaks fluent Cantonese. ‘My Chinese clients are always surprised, as my name does not sound Chinese, but when they meet me, they are very happy to converse in Chinese.’

Most notable previous owner: The Marquis d’Alesme was a hugely important man, who did much to encourage the planting of vines in the Médoc, but I will also mention here Edmond Ritz, the grandfather of Jean-Claude Zuger who sold the estate to the Perrodos, and who still lives in the family chateau. Ritz was a Corps des Mines engineer, which basically means that he graduated from the most specialist engineering school in France, attached to the Ministry of Finance. Many of these graduates go on to run the biggest companies in the country.

Commercial strategy: 100% négociants, with 30% sold in Hong Kong and Mainland China, and around the same again sold in the US. 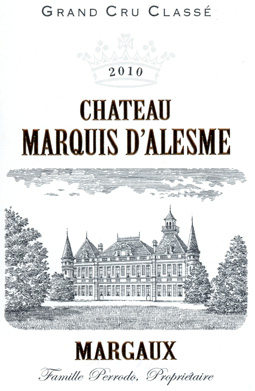 The vineyard of Marquis D’Alesme (pronounced Dalem by the way) dates back to 1585, and the first record of a property on the site came in 1616. Its original name came from an aristocratic Bordeaux owner the Marquis d’Alesme, who was one of the first promoters of planting vines in the Médoc but died in 1594, when the property passed to his wife Dames Jehanne de Tastes. As with many aristocratic families, the French Revolution meant an enforced sale, and after a few years under state control, it was bought by a Dutch merchant Jean Bekker Terrlink in 1809. The chateau became known as Marquis D’Alesme Becker in honour of his middle name – in fact it was often referred to simply as Becker – and this was the name it held in 1855 when it was crowned a Third Growth at the Paris Exhibition. In 1859 the chateau was enlarged and restored to today’s Louis XIII style, with a large park in the centre of Margaux village.

The estate was nearly merged with Chateau Lascombes in the early 20th century, when it was bought by Count Chaix d’Est-Ange, but he died in 1923 before completing the merger. It was then briefly owned by English firm WH Chaplin & Co, until 1938, when it was bought by Edmond Ritz, a Corps des Mines engineer from Alsace. It was his grandson Jean-Claude Zuger who sold to the Perrodo family (the Zugers also owner Chateau Malescot-Saint-Exupéry) in 2006.

Plantation and vineyard work: The usual blend is a full 70% Cabernet Sauvignon, with 25% Merlot and 5% Petit Verdot, reflecting roughly the plantings within the vineyard itself, and recent replanting has been intended to maintain this high level of Cabernet Sauvignon. Average age of vines 40 years.

Vinification: Work is led by winemaker and managing director Marjolaine de Coninck, who joined the team in 2010. The winemaking is carried out in half wooden vats, half concrete vats, all fully replaced in 2010, and that will form part of the new winery when it is completed in 2015. The wine spends 18 months in barrels, with between 50-60% new oak. Fabien Raymond works as technical director alongside Marjolaine de Coninck.

Terroir: The vineyard is divided into three plots – one right next to the chateau building in the village of Margaux, where the soil is largely gravel and clay. A second, more gravel heavy plot runs alongside the D2 Route des Chateaux road, and the third is in the village of Soussans, to the north of Margaux, of marl, silt and gravel.

The ambitious building project, overseen by architect Fabien Pedelaborde, who worked on the excellent renovations at Chateau Soutard in Saint Emilion, is due for completion for Spring 2015. One of the three buildings will be a stone-by-stone reconstruction of an 18th century pavilion from the Labegorce site. It contains the original foundation stone from 1789, with the name of the stonemason at the time carved on to it. Alongside, is the new foundation stone from 2013, carved with Nathalie Perrodo’s name alongside the stone masons of today. There will also be extensive children’s activities, included allowing them to press grapes under foot, in the traditional 18th century manner.