UNESCO World Heritage status for Barolo vineyards in 2014 recognised the important role of terroir in creating the ‘king of wines’. Ian D’Agata talked through different styles at the Decanter Shanghai Fine Wine Encounter. 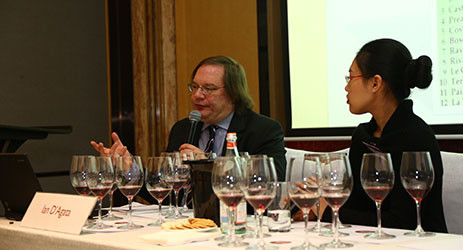 Rather than ‘king’, the old saying about Barolo might more aptly describe it as the royal family of wines. Ian D’Agata’s Barolo masterclass displayed the variety of styles available, covering top wines from several recent vintages.

‘Nebbiolo is one of the world's five or six greatest grapes,’ D’Agata told the audience at the Decanter Shanghai Fine Wine Encounter.

‘Like Pinot Noir, Nebbiolo is a remarkable translator of different terroirs,’ he said, as staff at the Ritz-Carlton in Pudong carried in extra tables to cater for demand.

Cannubi had the honour of being the first vineyard to be written on an Italian wine label, in the 18th Century. But, the refinement of Barolo and its international reputation have been a work in progress for several generations since.

‘Originally, Barolo was a blend of grapes coming from just about everywhere,’ D’Agata said.

One of the Slow Food movement’s founders, journalist Carlo Petrini, has been quoted in interviews talking about the way many Barolo wine producers only began to seriously consider the international stage from the 1980s onwards. Petrini was strongly influenced by Barolo producers he met in Piedmont. 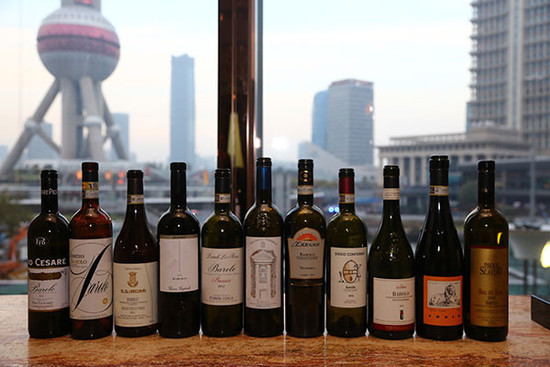 Talking through the wines on show in Shanghai, D’Agata began with the Pio Cesare, Classico, Barolo 2011, with its notes of red cherries and delicate spices.

‘This wine really gives you a sense of what Barolo is. You have this laser-like acidity and balanced tannins. And this is one of the reasons why Barolo wine can age forever.

Explaining some of the different terroirs that exist in Barolo, D’Agata highlighted the GD Vajra, Bricco delle Viole, Barolo 2011, from a cru vineyard in the La Morra zone.

‘It’s one of the higher crus, around 400 metres to 480m above sea level. It's a wine that does very well in hot years, because the grapes remain in a cool environment.

‘You notice the colour is red and the aroma is spices and cherries like the first two. But when you taste it, you realise that this wine is very different, because it has a much gentler tannic structure.

‘It's not as tight in the mouth. It seems smoother and it really is because of the different soils. Again, it's not that one is better and the other is worse. But this wine will be easier to drink sooner.’ 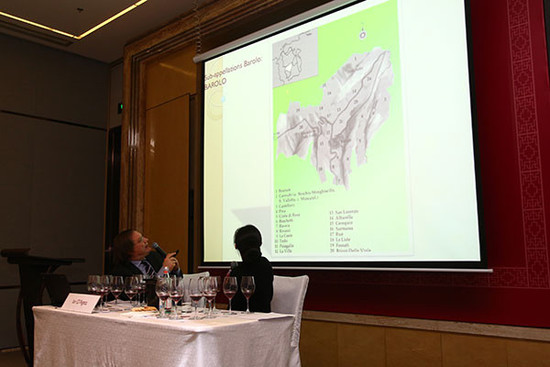 D’Agata told guests that the Monforte d’Alba area had ‘bigger, more tannic wines in general’, as shown by the Gianni Gagliardo, Serre, Barolo 2011.

There are, however, subtle differences between both producers and vineyards in Monforte d’Alba.

The Poderi Colla, Bussia, Barolo 2011, ‘resembles the previous wine even though the producers are different’, D’Agata said. But, it was slightly less tannic.

‘We say the area of Montforte is very tannic, but Bussia vineyard wines are actually the gentlest of the Monforte Barolos,’ he said.

The final wine of the class was a Paolo Scavino, Bric del Fiasc, Barolo 2005. ‘This last wine comes from the centre of Barolo,’ D’Agata said. ‘Some people say this area has the best of both worlds, where the soils on the right meet the soils on the left.

‘These are usually the most balanced of Barolos. The Bric del Fiasc vineyard is called this after the Italian word for ‘flask’. It's a very warm site and people used to work there with a flask of water.’

D’Agata finished his masterclass by adding that he believed the Barolo 2005 and Barolo 2008 vintages were underrated. ‘Everybody talks about 2010 and 2001,’ he said.

‘I really hope you like it, because they are great wines and they will age probably longer than we will.’

The full list of wines at the Barolo masterclass: