Early visits to the site this week suggest the park is focused as much on generating tourist dollars and improving rural incomes as it is about creating Chinese wines.

Rural tourism was a priority in the local government’s decision to bankroll the 750,000 square metre park, explains a worker onsite surnamed Liang, one of the locals tasked with tending grapes inside the park.

The local government purchased a long term rent on his plot of land and now pays him a monthly wage of almost RMB2,700 to tend to over a dozen grape varieties grown here for show.

Liang says he was happy to give up his 10 mu plot (15 mu equals one hectare) because growing seasonal cash crops like eggplant and water melons proved too much when his son moved to an industrial job in Tianjin city, 150 km away.

As China’s rural population empties out and the government seeks to reform land transfer system to allow easier transfers, there are lots of schemes aimed at building large-scale, mechanised farms and improving livelihood for smallholders through non-farm incomes like tourism.

Mr Liang says he has little knowledge of grapes and drank his first red wine at the opening party for the park put on by local government.

Beijing accountant Xu Guohua might be the kind of tourist the authorities in Yangqing would like to attract. He and his wife and sister in law spent over RMB1,200 on a day trip to the park - between entry fees, restaurants, parking fees and a three-bottle set of Cabernet Sauvignon-variety wine.

The 100-strong staff at the park includes a team of guides who walk visitors through grape trellises and greenhouses. But knowledge of grape varieties appeared minimal. When asked which grape varieties were most popularly used in China one of the guides, who gave her name as Ms Lu, said she wasn’t sure.

One of the goals of the park, according to a large welcome hoarding at the main gate, is to popularise knowledge of grape varieties and viticulture in China.

The park in Yangqing isn’t the only wine attraction for tourists in China’s capital. Viewers of prime-time morning news show on China Central TV are already used to adverts for Chateau Changyu AFIP Global, a replica French chateau and luxury hotel in Beijing’s Miyun region.

State-owned Changyu is one of China’s largest winemakers.

Meanwhile in Changyu’s home province of Shandong, the local government has this month put up giant maps showing tourist trails around the estate built by Domaines Barons de Rothschild (Lafite), as well as a smaller Treaty Port estate, complete with a Scottish castle, set up by British financier Chris Ruffle.

The Yangqing government may be on to a winner. Xu Guohua says his trip was money well spent, as he’d like to learn more about grapes to impress colleagues at work.

‘I bought a bottle of Niya (a brand produced by the CITIC Guoan Corp, state run conglomerate in China’s far west) wine from Xinjiang lately and it said it was “golden latitude” because the vineyard was the same latitude as Bordeaux in France, I wanted to understand what that meant...’ 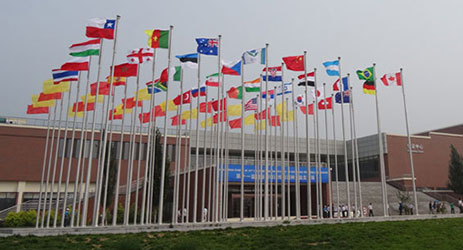 Chinese wine to get boost from global wine grape conference