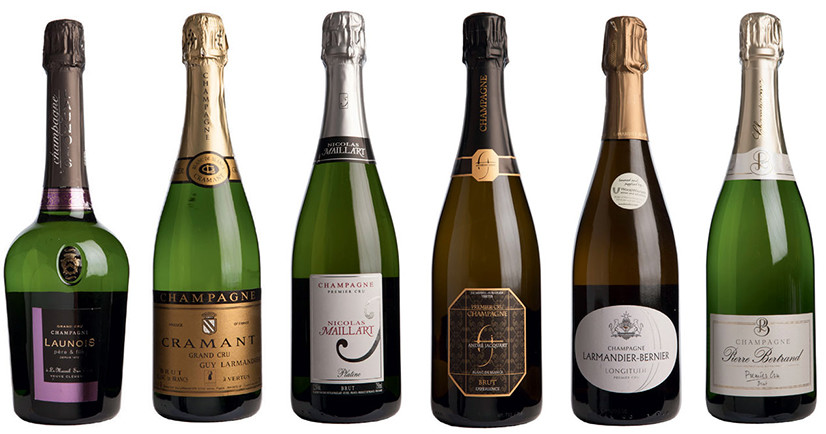 Historically, most Champagnes have been made by négociant houses, who buy most of their grapes from growers. But there are also many grower estates making their own Champagnes – some have done so since the late 19th century, and recent years have seen a rapid increase in their numbers. They remain in the minority in terms of market share, but have had a significant impact on the way wine consumers approach Champagne.

While it’s currently fashionable to embrace grower Champagne, it’s a fallacy to say that grower Champagne is somehow intrinsically ‘better’; indeed, the big houses arguably retain the upper hand in consistency of quality.

Yet it’s the diversity of styles found among the grower producers that makes grower Champagne so fascinating – they offer a much wider array of expressions than were available in the region even just a couple of decades ago.

In their contemporary sense of aesthetics, these wines can often challenge orthodox ideas of what Champagne is, with their concentrated fruit flavours and intense, almost forceful personalities. This is part of the evolution of the appellation: an ongoing re-evaluation of the identity of Champagne in the modern day.

The best growers produce some of the finest wines in the appellation, and they have been at the forefront of a region-wide movement towards vineyard rehabilitation.

Over the past 20 years, the dialogue surrounding Champagne has expanded beyond the traditional hegemonic themes of the art of blending and long ageing on the lees, and producer and consumer alike have begun to address contemporary and qualitative issues such as sustainability, ecologically responsible viticulture and expression of place, emphasising the concept that Champagne, like any other fine wine, derives its character primarily from its vineyards.

It’s important to note that these issues are not the sole province of grower estates, as there are also négociant houses in Champagne that are leaders in this regard. Also, it’s still a minority of growers who are meaningfully engaged in these issues. Grower Champagne is not automatically synonymous with terroir-driven Champagne, and while progress is slowly being made across the region, the majority of grower estates continue to farm as industrially as ever, as do many houses. The leading growers, though – those who choose to be forward-thinking and meticulous in the way they work in their vineyards and cellars – are principal voices in the contemporary dialogue, and are instrumental in moving the appellation forward.

Peter Liem is a wine writer who lives in the Champagne region and publisheswww.champagneguide.net

Controversial for a pervasive vegetal character, perhaps due to uneven ripening, although some tasters are impervious to it

Variable, although those who worked diligently in the vines produced some lively, expressive wines

Superbly vibrant wines with outstanding potential, in a concentrated style reminiscent of 1996

Chardonnay probably fared the best in this variable vintage

• There are 15,800 growers in Champagne, most of whom sell their grapes to other houses

• Growers own 90% of the appellation’s vineyards

• About 4,000 growers produce their own Champagnes

• Grower Champagne accounts for 19.5% of Champagne’s production by volume – however...

• Grower Champagne accounts for just 1.4% of Champagne sales in the UK, and 4.9% in the US

Diversity of style and sheer strength of character made for a challenging tasting, yet the grower Champagnes offer real value and interest, says Christelle Guibert

This week try 13 top wines gaining over 92 points from the panel tasting.

Mature fig and baking spice aromas - hinting at use of reserve wine. Bubbles dance across the palate and while the fizz is rather subdued, the style is to be venerated: plump, indulgent but pleasingly so.

Mono-cépage, yes, but far from mono-dimensional, the red berry fruit profile here underwritten by salinity and herbal spruce - almost tannic in intent, this is gourmand, full of character and richly rewarding.

Luxuriant oak on the nose, worn lightly and with velvety panache, then a palate with plenty of fizz, exuberance and latent maturity, its notes of fig, praline and dried fruit beautifully integrated; serious, admirable style.

Relatively mature nose which marries herbs, currants and hints of crème brûlée, tempered by a creamy and languid palate kept neatly in check with a sobering tight structure; offering plenty of pleasure.

Super-charged, boasting the exuberant character of young Chardonnay with panache and joie de vivre - still a tad raw perhaps but beneath that, plenty of promising fruit and a finely constructed elegance; well-made.

Apple and cow parsley on the nose; a spring sonata. Texturally easy-going and uncluttered but pleasing, a citric character buttressing its lean architecture, its linear inclinations emphasising elegance, poise and harmony; well done.

Shy yet enticing lemongrass nose; initially rather reticent, then opening up with plenty of energy, fizz and well-formed bubbles - lively but without aggression. Subtle, tight and long. Bravo!

Youthful, energetic nose with orchard fruit and hints of zesty mandarin, while the palate showcases a citric immediacy. Stylish and exciting with so much still to come.

A powerful example, with almost a tannic grip and hints of gunpower and incense. Feels drier than most, perhaps due to a lower dosage - there is a serious rigour here, offering plenty of gastronomic potential.

Serious opulence and finesse come from this wine. A perfect example of grower champagne with a complete finish.

Persuasive mousse and very attractive aromatics of summer flowers, honeydew melon and Mirabelle plum. The palate has definition, concentration and amazing fruit character, amazing in its intensity, but also in its drawing from the redder end of the spectrum, despite its white grape provenance. Impressive.

Grapefruit and slightly closed nose. Pretty high-pitched and lemony pith notes coming through. A little uncompromising and hard for general Champagne drinkers maybe, but this is a winner for those who like it honed and dry and persistent.

Bold of colour and aromatic, a very complete and commercially savvy Champagne; excellent Pinot weight then Chardonnay lift, muscular and spicy, its generous sweet fruit finish, the work of natural rather than human intervention.