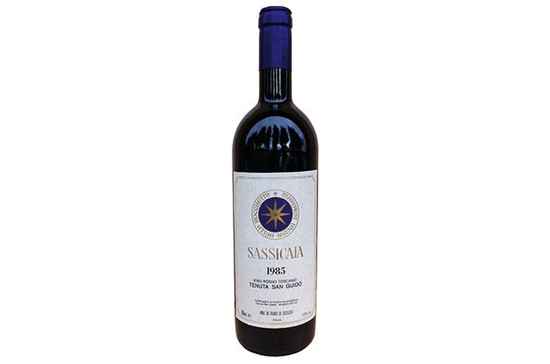 Sassicaia was already well known by the 1980s, but there was a sensation when Robert Parker awarded the 1985 vintage 100 points, saying that he often mistook it for 1986 Mouton-Rothschild. The excellence of the wine has been confirmed at tastings ever since. This was not the first time Sassicaia had wowed critics. In 1978, Decanter held a worldwide Cabernet tasting in which the 1975 Sassicaia triumphed. But its reputation has been eclipsed by that of the 1985, which now fetches prices far higher than any other Sassicaia vintage.

Winemaking had improved in Tuscany by the mid-1980s, and it was no longer known only for quaffable, often rustic, wines. Hampered by outdated regulations for Chianti, many producers in the Chianti zone and elsewhere began producing Bordeaux-influenced wines or Cabernet Sauvignon-Sangiovese blends, which became known as ‘Super Tuscans’. Sassicaia was the grandfather of this movement and, from 1985 on, SuperTuscans would proliferate.

Sassicaia was first made by Marchese Mario Incisa della Rocchetta in 1943. In the mid-1960s, Mario offered his nephew, Piero Antinori, the distribution of Sassicaia which, until then, had been a wine for family consumption. At the same time, Antinori lent the services of his consultant winemaker, Giacomo Tachis, to Mario, enabling a commercially viable Sassicaia to be made from 1968 onwards. Mario died in 1983, but by then the estate ‘which had taken back control of Sassicaia’s marketing and sales from Antinori’ was already being run by Mario’s son Nicolò. The 1985 was produced under his watch and with Tachis, who remained as consultant to the estate until 2010. (Tachis is Decanter’s 2011 Man of the Year.)

1985 was an outstanding, consistent year. Perfect weather conditions resulted in superb wines, especially in Piedmont and Tuscany. The winter had been extremely cold in the Chianti zone and the crop was below average in size, but the coastal area where Sassicaia is located had a less extreme growing season and the grapes reached exceptional maturity.

There are three vineyards on the estate. The original vineyard, Castiglioncello, just 1.5 hectares, is at an elevation of 340m. At 80m, Sassicaia di Sotto is 13ha on gravelly clay soils (these vines would have been about 10 years old for the 1985). Slightly higher, Aianova has 16ha of well-drained soil, with vines of a similar age. About 70% of the vines were Cabernet Sauvignon, the remainder Cabernet Franc. The estate believes it is the Cabernet Franc that gives the wine finesse and longevity. In the late 1990s, the unique character and quality of Sassicaia was recognised when it was given its own appellation: Bolgheri-Sassicaia. It is the only single estate in Italy with its own DOC.

Marchese Mario Incisa della Rocchetta, a claret lover, initially wanted Cabernet-based wines for family consumption that would satisfy his Francophile tastes. For the 1985 vintage, grapes from the estate’s three vineyards would have been crushed and fermented separately in steel tanks at 30°C for about two weeks and then blended before being aged for 22 months in 30% new barrels, of which 60% were French and 40% Slavonian. Today all the barrels are French oak, but with the same proportion of new wood.

In 1992, Michael Broadbent noted: ‘very deep, sweet, full, chewy’, but by 1994 he was slightly less enthusiastic: ‘a bit raw and edgy’. More recent comments, however, suggest the 1985 is by no means tiring.

Jane Anson gave Sassicaia 1985 100 points after a vertical tasting last year. ‘Get hold of this wine if you possibly can,’ she said.