From its first experimental vintage in 1951, Grange was always intended by its creator Max Schubert (1915-1994) to be an icon that would epitomise all that was finest about Australian Shiraz. It was made to be capable of ageing for decades, and many vintages, including this, have fulfilled that promise. The 1955 Grange is listed as a ‘heritage wine’ by the Australian National Trust, and has won more medals (12 trophies and 52 golds) than any other Grange vintage.

The 1950s was not a time when consumers had very high expectations of Australian wines. Schubert, in crafting Grange, was looking for fruit of exceptional ripeness, which is why he had no qualms about blending wines from different sources. This became standard Australian practice, but Schubert was aiming for a specific style, not just a multi-regional blend that would be commercially appealing. He gave Grange a stylistic consistency that was surprising given the range of vineyards used to make it. Ageing in new US oak contributed to the wine’s distinctive signature.

Max Schubert joined Penfolds aged 15, and remained there, except for military service during World War II. A trip to Europe in 1950 made him aware of technical innovations in Bordeauxand Germany, and he brought these ideas back to South Australia. While travelling he had already resolved to create an Australian red that could rival Europe’s greatest wines. He created a small team of winemakers who remained very loyal, especially when his bosses at Penfolds voiced their disapproval of Grange. The significance of Grange in an global context was recognised when Decanter named Schubert Man of the Year in 1988.

This does not really apply to Grange, as it has never been a single-vineyard wine. Schubert wanted only the finest, ripest fruit, and chose grapes that met his criteria from a number of South Australian vineyards, notably Kalimna in the Barossa Valley, and, after 1961, Coonawarra. The 1955 was composed of fruit from Magill Estate and Morphett Vale (both Adelaide), Kalimna and McLaren Vale.

1955 was a mild year but the growing season was interrupted by substantial, above-average rain (due to the La Niña weather system) before warm, dry weather returned. The spring was mild, with normal flowering, but the early summer was dry, windy and hot. Then conditions returned to normal, with moderate heat and occasional rainfall, bringing the grapes to perfect ripeness.

The grapes were fermented using the submerged cap technique, which kept the cap in constant contact with the juice. Schubert used rudimentary temperature control that reduced risks of bacterial spoilage and helped to extract tannin and colour. Before the wine had fermented to dryness, he would rack it into 300-litre US oak barrels to complete fermentation, a tricky technique and one that he pioneered in Australia. Grange usually remains in new oak for 18 months, although the 1955 only spent nine months in barrel.

To Schubert’s dismay, many of his colleagues at Penfolds were critical of the style of the 1955 and preceding vintages, especially their high volatile acidity. He was ordered to cease production, and made the Granges of the late 1950s in secret, hence there was no access to new oak, and the wines did not age as well as the 1953 or 1955. Another in-house tasting in 1960 led to Grange’s rehabilitation; volumes, initially tiny, began to increase. In 1962, the 1955 was acclaimed at the Royal Sydney Wine Show and continued to win praise in international competitions.

In 1985 Michael Broadbent judged it ‘remarkably like a mature Bordeaux’. By 1994 ‘it was showing its age but harmonious and somewhat chocolatey’. By 1999 it showed a ‘caramelly nose; still very sweet, soft textured’.

Today it is fully ready to drink. In 2008, Andrew Caillard MW of Langton’s Australia, described it as ‘a fleshy, supple, smooth wine with mature, meaty, gamey mocha flavours and satin-textured tannins with a long fruit sweet finish.’ 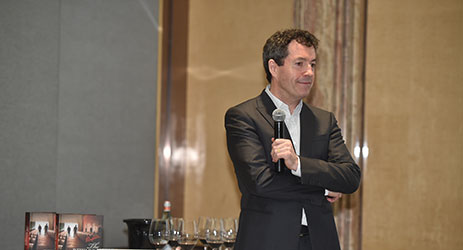