Young Chinese winemakers from some of China’s biggest producers have just returned from a two-month trip to Europe to help perfect their skills, as part of a co-operation deal struck between wine trade bodies in both regions.

The five Chinese interns, two from the Changyu Brandy Company, two from COFCO Wines and Spirits Ltd and one from Dynasty Fine Wines Group, completed an internship with several Italian and Spanish wineries*, including Marchese de Frescobaldi and Bodegas Miguel Torres.

The internships were part of a two-year knowledge sharing project launched jointly by the European Wine Committee (CEEV) and the Chinese Alcohol Drinks Association (CADA). That project was agreed as part of a resolution to a trade dispute between China and the European Union – initially over tariffs on solar panels and subsequently expanded to wine.

There is rising international interest in Chinese wine, as shown by the number of people who crowded into a seminar room at the ProWein trade show last week for tasting hosted by professor Li Demei, winemaking consultant and DecanterChina.com columnist.

During the internships, the young winemakers participated in the ‘full wine production process’, including fermentation, filling and bottling, as well as analysis and laboratory tasks, said CEEV.

In return, CADA has agreed to help European producers to ‘promote the appreciation of wines and its culture’ in China through tastings and trade events.

The most recent example was the 2015 China International Alcoholic Drinks Exposition hosted in Luzhou, which saw a co-tasting of European and Chinese wines, according to Bethléem Dubois, project manager of the EU-China Wine Cooperation programme. More tastings and seminars are being planned ‘over the coming months’, Dubois added. 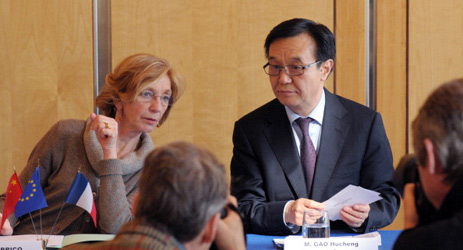