From the legendary Château Lafite Rothschild and Carruades de Lafite to the popular DBR Collection, all wines of Domaines Barons de Rothschild (Lafite) glow with Lafite's spirit ---- Excellence, Finesse, Élégance. The high-profile launch of Château Paradis Casseuil 2012 is destined to continue the marvel. ASC Fine Wines acquires DBR (Lafite)'s global exclusive authorization in China to "escort" the selling of Paradis Casseuil 2012. What's the story and unique characteristics contained in such mysterious and highly-anticipated wine? Follow us! Let's start the leisurely journey of savoring the nectar of the vines of paradise "Entre Deux Mers"!

The Beautiful Legend of "Vines of Paradise"

As the capital of wine industry, Bordeaux is the best-known in the world, and the largest in France. It is famous for producing classical and elegant wines with good length and well-balanced structure. Château Paradis Casseuil is located in the region "Entre-Deux-Mers", the biggest wine producing region with the widest vineyard area in Bordeaux. The region takes its name, “Entre-Deux-Mers", from a suggestive environment between two rivers, Dordogne and Garonne, locally called “the two seas". Rich sunlight, temperate marine climate, and land covered with yellow calcified sandy soil and gravel, all these together create an ideal environment for planting premium grape. This is the home of Château Paradis Casseuil.

The origin of the Château’s name, Paradis Casseuil, is another beautiful legend. "Casseuil" is from the name of a village called Casseuil in the region, while "Paradis" comes from "Vines of Paradise", a loving name for the land's vineyard called by the local people. It is not sure when the title “Paradise" was bestowed, but it is certain that the land never let the name down. Soaked in ample sunlight, the splendid landscape of the Château is the paradise of grape that are brewed into representative fine wine of the region “Entre-Deux-Mers".

After collaborating for 29 years, the partners work together to put forward a new strategic layout. In 2013, DBR (Lafite) elaborately selected and acquired 30 hectares of old vines of Cabernet Sauvignon and Merlot of high potential, enlarging the Château to 53 hectares. Currently it is planted with 70% Merlot, 25% Cabernet Sauvignon and 5% Cabernet Franc, the average vine age of which is more than 35 years. The blending of the two star varieties is really the creation of God: Merlot provides full soft palate; Cabernet Sauvignon intensifies tannic and acid flavor; the supplement of each other gives the wine a pleasant mouth feel.

"Excellence, Finesse, Élégance", is the spirit of DBR (Lafite)'s. It's the persistency on the spirit and the pursuit of optimum day after day during the 29 year's collaboration between the group and the Château that vinify the premium Nectar-Entre-Deux-Mers.

The production of Château Paradis Casseuil is supervised by the DBR (Lafite)'s Bordeaux estates technical team. Traditional Bordeaux techniques of Château Lafite Rothschild are used during the vinification by temperature control. In order to preserve the fresh fruity flavor, the fermented wine did not undergo the process of aging in oak barrel, and was bottled in the early autumn. The yield of Château Paradis Casseuil wine is deliberately limited to 8,000 cases this year. It will be increased in the following years. The "smaller quantity, and better quality" policy embodies DBR (Lafite)'s pursuit and respect for excellence.

Basic information of Château Paradis Casseuil 2012: Colour: Beautiful, very deep crimson color; Nose: Elegant and expressive, blending aromas of blackcurrant and Morello cherries with well-integrated, delicate woody (vanilla) notes. Palate: This is a powerful, well-structured wine, with a pleasant sweetness on the attack, evolving with firm tannins and a long spicy finish, bringing you to the Paradise as its name shows. Storage time: It is recommended to keep the wine for 2~3 years until it gets soft and smooth for drinking. Serving temperature: 15-17℃. Decanting: about 1 hour of decanting enables the aromas to open up, expressing the wine's full flavor.

Create A Paradise By Fusing The West And The East

In line with its pursuit for the acme of fine wine and life art, DBR (Lafite) has been dedicated to popularize the art of delicacies and fine wine. The ultimate meaning of the mutual supplement between delicacies and fine wine is to stimulate the potential of palate to reach the peak of harmonious taste. Let's see how Château Paradis Casseuil, the representative wine of the “Entre-deux-mers", fuses with the western and eastern cuisine in creating a feast of paradise!

There are a wide variety of dishes seasoned by grape wine in western cuisine, and red-wine beefsteak is typical of the kind. A dish with red-wine based Bordeaux sauce is the perfect match for Château Paradis Casseuil also from Bordeaux. Aroma of vanilla in the wine makes the steak more tempting, and the wine bouquet in the dish answered by the fine wine creates the best echo in the world. 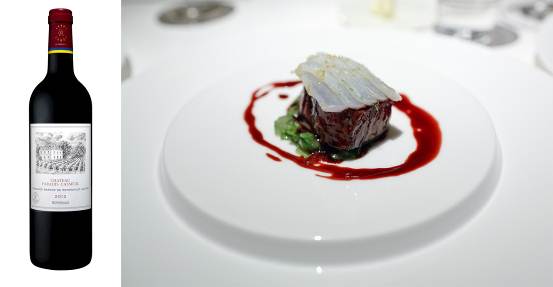 Red-wine egg custard is a famous dessert in Burgundy region. When the Burgundy delicacy meets Château Paradis Casseuil, the representative wine of the “Entre-deux-mers", the two styles merge like water and milk: the tender texture of egg and the smoothness of fine wine fuse; the fruity flavor of wine mildens the salty flavor of ham; the match enhances the taste of each other. 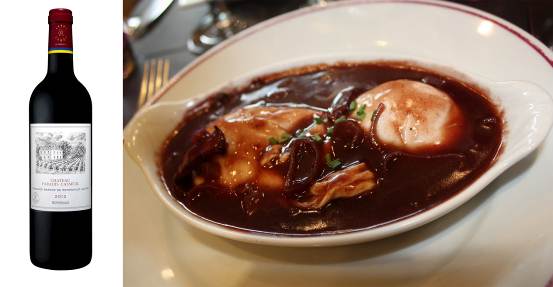 As a typical Chinese home dish, hot oil eel paste features tender eel meat and overflowing aroma. Going with Château Paradis Casseuil, the delicacy of the dish expresses the sweetness of vanilla in wine; the pepper flavor of the dish lures out the spicy taste in the wine. The food and wine are releasing the charm of each other. 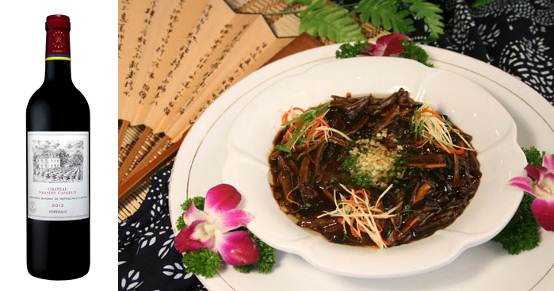 With dense oil and dark sauce, Stir-fried Hairy Crab & Rice Cake features tenderness of crab meat and softness of rice cake, which is the perfect match for Château Paradis Casseuil. The fruity flavor of wine refreshes the dark sauce of fried crab meat, and merges just to point with the sweetness of the dish, leading to an endless taste. 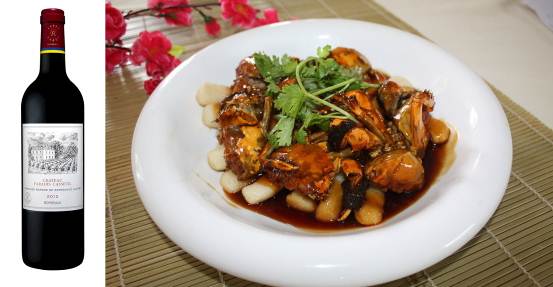 A initial taste of the nectar from Entre-Deux-Mers brings you as usual its finesse, Élégance, and mellowness; a further taste brings you the vinification technique and the special cultural and custom style of Bordeaux hidden in the wine; drink beyond the wine, and you will gradually understand the wine-admiring culture and life philosophy expressed by it. Take a sip, savor it, ruminate it, feel it, and peacefully enjoy the paradise created by Château Paradis Casseuil 2012.