Cilento: head for the sea

The coast is some of Italy’s least spoiled, with rocky shores interrupted by small fishing villages such as Marina di Pisciotta or Sapri. Seafood is plentiful: family boats still set off at night to attract octopus and baby squid... 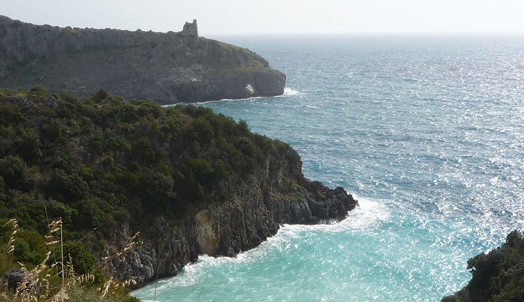 Head for the sea

The coast is some of Italy’s least spoiled, with rocky shores interrupted by small fishing villages such as Marina di Pisciotta or Sapri. Seafood is plentiful: family boats still set off at night to attract octopus and baby squid. At Pisciotta, fresh anchovies are caught using a type of net – la menaica – that dates back to ancient Greece. This area was part of Magna Grecia, as the majestic temples standing at Paestum attest. They’re as good as anything in Greece or Sicily and, if you go off season or early in the day, you’ll have them practically to yourself. In 1944, when the Allies landed on Paestum’s beaches, all they found in the flat marshes surrounding the temples were buffaloes: this is one of only two areas in Italy in which mozzarella di bufala DOP is made.

As for wine, it was long grown as one of many crops on family farms, but in the last 20 years a small number of visionary estates have dedicated themselves to making premium wines, with fine results. People like Bruno De Conciliis and Luigi Maffini have inspired a new batch of young producers with wines of character that reflect this land and complement its delicious food. Their wineries are visitable by appointment: the people you’ll meet also make the wines, so book ahead to get time with them. The best way to visit is by car. 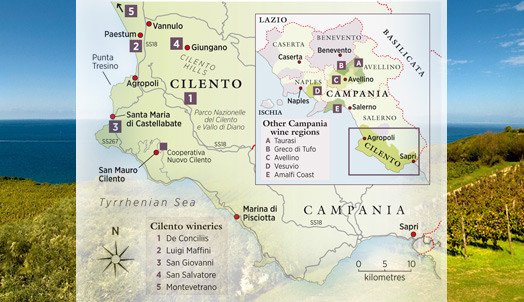 The De Conciliis family are pioneers. ‘It’s exciting to be making wine in an area with little oenological tradition,’ says Bruno De Conciliis, who, with his brother and sister run the family estate at Prignano Cilento (www.viticoltorideconciliis.it). A natural experimenter, De Conciliis’ range of exciting wines has loyal followers; it includes red and white Donnaluna, and Selim, the country’s first sparkling Aglianico, dedicated to jazz musician Miles Davis.

Just south of Agropoli, Mario Corrado and Ida Budetta have chosen an isolated, breath-taking position for their vineyards, with high views over the sea at Punta Tresino. Their estate, San Giovanni, has four hectares of vineyards and is making its name for Fiano and a Piedirosso that maintains its fresh, natural character in what are often very hot summers here (www.agricolasangiovanni.it).

Luigi Maffini also works by the coast, at Cenito, near Castellabate (www.luigimaffini.it). He ages his mineral Fianos, Kratos and Pietraincatenata in wood. Maffini’s 11ha of vineyards are certified organic, and his new cellar will be a fitting home for them.

Nearby at Giungano, hotelier Giuseppe Pagano of San Salvatore estate has launched an ambitious farm project of buffaloes, extra virgin olive oil and vines (www.sansalvatore1988.it). With 16ha, the land is worked organically with biodynamic treatments, but there’s nothing rustic about the wines.

If you decide to drive north to the Amalfi Coast or Salerno from Cilento and want to meet one of the icons of Campanian winemaking, Silvia Imparato’s Montevetrano is located in the hills east of Salerno. Her Bordeaux blend with added Aglianico remains one of the region’s most famous and historic reds (www.montevetrano.it) and her winery is one of the region’s most beautiful, with an elegant agriturismo attached (www.lavecchiaquercia.it).

By plane to Naples, then a rented car – about 90 minutes’ drive if you take the autostrada. Public transport (train or coach from Naples) will get you to Paestum-Capaccio, but not into the Cilento hills.