What do you learn from tasting a 100 year vertical of a château from an appellation like Margaux? For one thing, that we all drink our Bordeaux way too young. Forget waiting 10 years. Even the 1998, now approaching its 18th birthday, felt almost impudently youthful, tannic and vigorous compared to the floral dreaming of the 50 year old bottles.

This was truly an exceptional tasting - one that neither the chateau owner, the consultant nor the four journalists present had done before. Not only were we tasting 100 years of history at a single estate, but also one that had been in the hands of the same family for the entire time. The Miailhe family has owned Château Siran since January 14, 1859, when they (or to be precise their ancestor Léo Barbier) bought it from the grandparents of painter Toulouse-Lautrec. Current owner Edouard Miailhe took over in 2007 as the fifth generation to run the property and has just returned to live full-time in Margaux after 12 years running the family business out in Manila.

Siran is discreetly located, the very last château before you turn off the snaking back road up to the Médoc that runs along the Garonne river and avoids the often torturously busy D2 Route des Châteaux. The morning we assembled for the tasting was the coldest of the year so far, the mercury dipping below freezing, fog and ice everywhere on the drive up from Bordeaux centre. You needed gloves and scarves in the cellars even though the 18th century château must have metre-thick limestone walls, and our tour of their recently renovated installations was rapid. 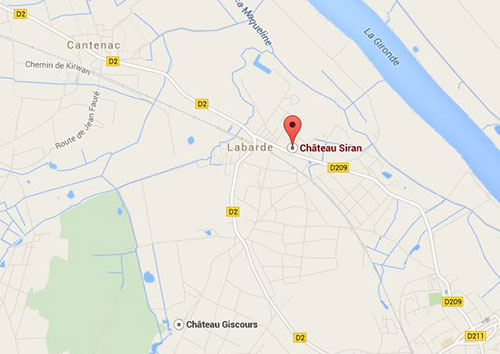 The tasting room itself was beautifully warm, with the wines – all bearing modern labels, having been re-corked at the château at various times in the 1980s and 1990s – had been opened around half an hour before we arrived. We began the tasting with the oldest, heading towards the youngest, to ensure those tight tannins – the same ones that allow the wines to age this beautifully – didn't coat our tongues too soon. After an appetiser to limber us up (the 1987 vintage, just hovering on the edge of fully developing its tertiary flavours), we began with the 1914, everyone falling into a respectful silence as the wine was poured, tawny butterscotch in colour.

This was the first year of world war one. The French government has just moved – on September 3, 1914, so just before harvest – to Bordeaux as Paris was under siege from the invading Germans forces. Up in the Médoc, Edouard Miailhe's grandfather Edouard had left the family property to fight for his country, leaving his elderly father Frederic Miailhe in charge of winemaking - helped by his wife, and the mainly female workforce that was left behind and that would help produce wine every year throughout the war (except, possibly, 1917, as that is the only war vintage missing from the Siran cellar).

Siran had 18 hectares of vines at the outbreak of war, and it has risen only six hectares in the intervening years, standing today at 24.5 hectares in 2015 (with further vines in AOC Bordeaux and AOC Haut-Médoc). This makes it a relatively small estate for the appellation. On either side are 1855 classified properties; Château Dauzac is bang next door with 42 hectares in Margaux and Château Giscours a short stroll away at 102 hectares. A few years before the Miaihle family arrived, Siran was overlooked in 1855, and is not classified (it was later named a Cru Bourgeois Exceptionnel), but its location – and the way its wines have held up in the bottle over the century that we tasted – show how arbitrary at times the famous ranking can be.

But the thrill of tasting this type of vertical is not just in the glass but in the discussion that it provokes, and the history that it shines a light on. We were tasting through four owners, heading back to Edouard’s great-grandfather, and through five consultants, starting with the legendary Emile Peynaud in the 1960s through to Hubert de Boüard who began with the most recent 2014 vintage.

Until the 1960s, only a part of the wine would have been bottled at the château, the rest would have been sent in barrel to négociants in the cellars of Chartrons in downtown Bordeaux, or overseas to merchants in Bristol, London, New York or further afield, who would have then bottled using their own labels, mentioning both the château and their own names. But all the wines that we were tasting had been bottled here, and had never left the Siran cellars.

Tasting through these wines took concentration, and respect. The eldest ones – 1914, 1916 and 1921 – needed patience to tease out, and you had to forget about looking for fruit, and concentrate instead on the sweet spice and tobacco leaf notes. Then along came the 1928 and 1929 – two exceptional vintages in terms of weather conditions in the Médoc – which blew everyone away with their intensity. This was a reminder not just of what Siran can achieve, but of what magic lies beneath the surface of this tiny corner of the world.

The colour is tawny-brown, but with a warm glow, just a few of those red-purple anthocyanins clinging on for dear life. There is still a fragrant bouquet here, recognisable for its gentle redcurrant fruits, alongside tobacco, truffles, tar, slightly saline, this one makes you smile with how well it has held up, with a line of acidity that is keeping it alive. Love this. Wow.

Another exceptional vintage, and the colour is similar to the 1928 – cold coffee, surprisingly intense. Very similar nose also to the 1928, both have held their own exceptionally well. On the palate this is smoother, more fleshed out, this emphasises the spicy side of the wine, clear white pepper, lovely herbal edge, saffron, again touches of salinity, truffles and floral edge of faded roses. A true experience to taste, a piece of history.