Jane Anson picks five inspirational wine stories that she has come across in 2015, her first year writing weekly columns for Decanter.com. Read about them here.

One of my favourite books this year has been The Novel Cure by Ella Berthoud and Susan Elderkin. An A-Z of literary remedies, it’s one of those books that sounds like a gimmick but turns out to be totally heartwarming – a brilliant romp through 2,000 years of literature that hinges on the idea that reading can cure what ails us.

Feeling lonely (but hungry), for example? Read Armistead Maupin’s ode to San Francisco 28 Barbary Lane, because, as Berthoud and Elderkin put it, this is a book to keep in your kitchen alongside your cookbooks, rejoicing in characters that love to eat as well as laugh.

As we head towards the end of the year, I wondered how we might apply The Novel Cure to wine. Below are five of the best wine stories I have come across in 2015, linked to specific bottles I have particularly enjoyed. 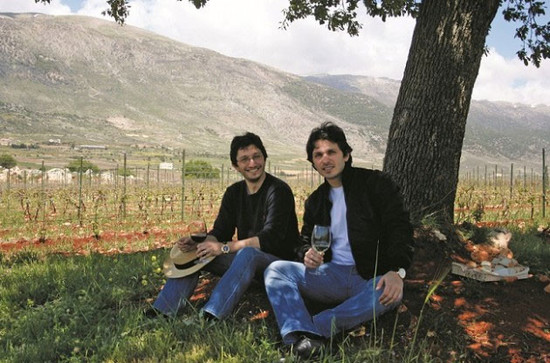 In a non-descript Vinexpo hall, a clutch of photographs on the walls showing neat rows of vines against a mountainous backdrop, a family determinedly trying to find importers for what must be right now the world’s most difficult and dangerous wine to produce.

If any bottle this year should remind us that the culture of wine is an important and far-reaching one, it is Domaine de Bargylus. Owned by the Saadé family, who also own Chateau Marsyas in the Lebanon’s Bekaa Valley, Bargylus is the only remaining commercial winery in Syria.

Sat at 800 metres in altitude, it grows mainly Syrah and Chardonnay grapes in the northwest province of Latakia. When the family planted the vines in 2003, and brought Stéphane Derenoncourt on board as consultant, it was to restore the renown of an area where both the Romans and Greeks planted vineyards.

It has now been over four years since Karim Saadé and his brother Johnny have visited, relying instead of local workers to bring in the harvest under frequently dangerous conditions.

Grapes have to be sent on a four hour journey over the Lebanese border via taxi for laboratory testing. Getting the finished wine out of Syria is an uncertain task that is usually best done by sea, but you can find bottles of Domaine de Bargylus, and more easily the also excellent Chateau Marsyas, in Michelin-starred restaurants by Gordon Ramsay, Heston Blumenthal and Joel Robuchon.

Karim Saadé called its continued production, ‘an act of resistance and perseverance’ and this remains perhaps the most striking wine that I have tried all year, not just at Vinexpo, but from a bottle of the 2010 white at Le Wine Bar in Bordeaux, and certainly the most humbling.

I have chosen this wine, tasted at a vertical in March to celebrate 25 years of the Cathiards’ ownership of Smith Haut Lafitte, for what it represents. It was also excellent, and I gave it 97 points, noting its stunning powerful but restrained structure and how it seemed to practically ‘hover above the ground’.

One of the lesser-known round-tables at the recent Paris climate change summit, COP21, was held by winemakers. The session was led by United Nations, and included representatives from Moët et Chandon, Fetzer, Concha Y Toro, Chateau Maris and Smith Haut Lafitte, which shared their initiatives to reduce carbon footprints.

Wine production has long been seen as a ‘canary in the coalmine’ for global warming, and it’s worth saluting producers that are trying to address the issue. At Smith Haut Lafitte this includes a serious carbon capture scheme, with a ‘stealth cellar’ that has been built with both solar panels and insulating-vegetation on the roof, and has CO2 capture devices on each vat that recycles the 20 tonnes of carbon produced during each vintage, turning it into useable bicarbonate of soda.

This is one of several far-reaching initiatives employed by the estate; one of the most interesting is their efforts to encourage genetic diversity by growing their own rootstocks on a small island in the Garonne.

The new-look Champagne Brimoncourt launched its first NV Champagne on the market in January 2014. It was a name that last found itself on a label in the 1950s, and lay dormant until ex-lawyer Alexandre Cornot rescued it and dared to take a crack at what must be one of the most difficult tasks the wine industry; to launch a new brand into the highly closed-off world of Champagne.

I interviewed Cornot in September of this year and it was easily one of my most inspiring meetings of the year. This is a guy who left a highly-paid job to become an intern at Christie’s in New York, then rescued an old printing works in Aÿ that made Champagne labels before turning the building into a wine cellar and launching Brimoncourt (helped by contacts he had cultivated through the labels business).

I had the Brut Régence again last week, and am seriously impressed with what he has achieved in such a short space of time. A great reminder that if we want something enough, we should never take no for an answer.

Hands down, Pierre-Yves Colin-Morey was the most exciting winemaker that I discovered in 2015. The eldest son of Marc Colin, this wine blew me away when I drank it over lunch a few months ago.

It was recommended to me by sommelier Maxime Walkowiak at the Waterside Inn, and I can’t thank him enough. It’s the very definition of nervy, exactly what you want Meursault to be but so often isn’t; thrillingly complex but without a trace of heaviness. Focused, mouth-watering, reassuringly sitting on the tightrope of reduction, and just so moreish.

I have since tried a number of his wines – not always easy to find – and consistently been impressed by their quality even at the entry level. Try his basic Bourgogne Blanc to see what I mean. This one is chosen for the sheer pleasure of drinking a wine that makes you smile from ear to ear.

Strictly speaking this was neither an AOC nor a classified wine in 1929, but it was easily one of the most incredible wines that I have tasted in my life, not just in 2015.

It was part of a vertical tasting of Canon from 2014 back to 1929 held in the Chanel offices on Place Vendôme, Paris – the perks of being owned by the Wertheimer brothers, I guess. Among the vintages on display were the 1982 and 1955, but it was the 1929 that blew everyone away.

The yields were just 9hl/h, giving a concentration that was still firmly on display. The aromatics were almost modern, with traces of vanilla (the degradation of the menthol molecule turns to vanilla over time) alongside tactile leather and suede textures.

Waxy-edged, touches of gingerbread and cigar smoke, with a volume and density that at this age was not just striking but moving. We tasted it with new director Nicolas Audebert, who told us there were only 40 bottles left at châteaux.

An immense privilege, and a reminder that wine is not only a way to capture lost time, but a means of paying our respect to those that have gone before us. Something that we can all raise a glass to at Christmas…