I was invited to an exploratory tour of the Spring Food & Drinks Fair in Chengdu that took place over seven days from March 17th until the 23rd. There are in reality two sets of fairs, the first occurs inside three colossal hotels (Shangri-La, Kempinski and Xanadu) called the Tao Show or otherwise referred to as the International Wine and Spirit Show (IWSS) or hotel fair.

This show is solely focused on wine, beer and spirits, while the even larger CFDF (China Food & Drinks Fair) includes food, its packaging and machinery, in addition to wine and spirits. Even though this year marks the 100th fair, the fair is only 64 years old, having begun in 1955. It boasts being the largest and oldest fair in China.

In terms of exhibitors, both Prowein Düsseldorf and Vinitaly had more in 2018 with 6870 and 4272 exhibitors respectively. The CFDF lists 3000 exhibitors (including food exhibitors) and the Tao Show 1300, but it differs in that most of them are importers and distributors rather than producers as is the case with Prowein and Vinitaly.

Comparatively, the numbers get interesting when you look at visitors with the CFDF at 300,000 visitors vs. 60,000 for Prowein and 128,000 for Vinitaly. It takes a city of 12,132 km² and 10 million inhabitants to absorb the estimated number of visitors to Chengdu, which is more than the total population of Verona (257,275).

I visited both the hotel fair and the main CFDF fair. It was suggested to me that the Shangri-La hotel fair is the most relevant and a must visit, which was confirmed by the bigger players in attendance such as Wines of Australia, Wines of South Africa, Wines of Chile and Treasury Wine Estates.

If I had to sum up my impressions of the fairs into one sentence it would be: I have never seen so many labels and wines that I did not recognise.

Having worked as a buyer for a UK importer, I attended all of the most important wine fairs in Europe to meet with producers and to find new ones. As a result, I got to know many producers and their labels and throughout the years it became easier to spot the new producers among the familiar ones that you see year in and year out. Because the Chengdu fair exhibitors are largely importers and distributors from all over China, there were countless inventive labels that I had never seen before. Having taken some photos for reference, I contacted a French Blaye Côtes de Bordeaux AOC producer to ask if the label I came across was the real deal-and it was. It was specific to the Chinese market and utterly unlike their actual label except for the name of the château.

At the same time I noted the bottle, like many others, had medal and points stickers taking up significant amount of frontal bottle space. I started to think this must be a window into what a budding wine market looks like. It was filled with enthusiasts and prospectors that have stampeded to the ‘gold rush’ hoping to find a nugget. Perhaps unbeknownst to some of the importers, the wine trade is hard and margins are small in contrast to other consumables. When those prospecting realise that nuggets are hard to come by, I expect there to be a ‘natural selection’ and only the fittest will remain.

In the meantime I wonder how and where all the wines and their countless labels will be sold, especially if they are meant for drinking while young and fresh, which I am fairly certain most of them are, given their price points.

At the CFDF fair, I tasted a handful of Chinese wines from Xinjiang, Hebei, Inner Mongolia, Shanxi, Gansu and Ningxia. This was a varied tasting and like the world over, conscientious producers that restrict yields and use carefully selected healthy grapes with experience and skilled winemakers make better wine. Those with unhealthy or unripe grapes at yields upwards of 60hl/ha in red grapes do not. At this nascent stage, I believe producers are still finding their feet. The tasting reconfirmed that I have yet to meet a Cabernet Gernischt (Carmenere) from China that impresses.

What impressed me about my brief trip was Chengdu itself. It is a beautiful city, huge with two rivers that meet in the centre. It is home to the Chengdu Panda Base but most significantly, an epicentre of spicy Sichuan food. The local people I met were so proud of their food and we spent a significant amount of time discussing where I should go eat when I return with husband in tow. In addition to gastronomy and pandas, there is also a vibrant nightlife. The Hong Kong Lan Kwai Fung group has brought the party to Chengdu via an enormous complex of hedonism. I indulged in the nightlife in the name of research, which only served to remind me of my age the next morning. I look forward to returning to the fair each spring to see its development, providing a glimpse into a slice of the Chinese wine market. Given the speed at which things move at in China, I would expect to see the market going through puberty in the next few years. 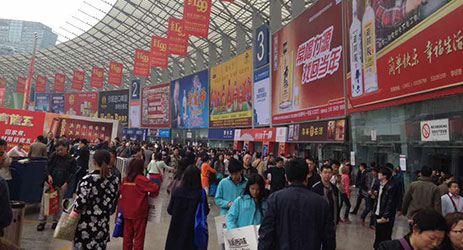