Location: AOC Pauillac with the winery building in the village of Mousset. 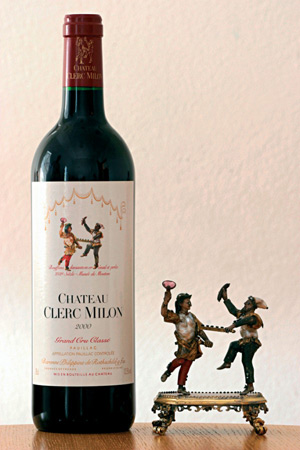 - Director Jean-Emmanuel Danjoy worked at Opus One in California for almost ten years before returning to France and Clerc Milon. Until he joined the estate, Clerc Milon shared a technical team with Mouton Rothschild, but it now has its own.

- There is no official château attached to the Clerc Milon estate. Instead it has a sleek, modern winery building that was inaugurated in 2011.

- The €13 million new winery is certified High Environmental Quality and is entirely gravity-led. Designed by architect Bernard Mazieres, who also worked on the new winery at Mouton Rothschild itself. All natural materials have been used – wood, glass and cement – and the exterior is made entirely of Ipé wood, the hardest known wood, and the white stone typical of the Médoc.

- By the 1960s, the size of Clerc Milon was only 15 hectares, having shrunk over the years as parts of the vineyard were abandoned or sold off.

- The wine label, with a pair of dancers, is an image drawn from an exhibit within the Museum of Art in Wine at Château Mouton Rothschild of a pair of Commedia Dell’Arte dancers set with precious stones, made by 17th century German goldsmiths. This is a popular label; a few years ago with the 2010 vintage, the estate thought of changing it to mark the new winery, but the dancers were reinstated following an outcry from customers. In China, the wine is nicknamed ‘the two dancing dolls’.

Most notable previous owner: Jean-Baptiste Clerc, who owned the estate at the time of the 1855 classification, and gave it his name, along with the village of Milon where the main part of the estate is located. 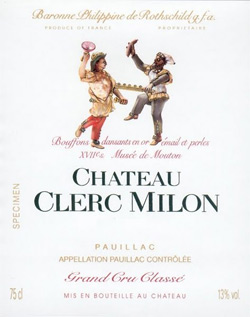 Once part of the Seigneurie de Lafite, the estate was confiscated during the French Revolution, and then bought by Jean-Baptiste Clerc. It was awarded Fifth Growth status during the 1855 classification, and then partly sold off in 1877 to the Mondon family. It the Mondon-owned section that was granted the right to use the Clerc Milon name (it was known as Clerc-Milon Mondon for many years), but it then fell into disrepair until Baron Philippe bought the estate in 1970 from a Pauillac notary called Jacques Vialard. Under the Rotschild ownership, it was completely renovated it in the 1970s and 80s, with disparate plots of land that once belonged to the property bought up and rejoined together.

Plantation and vineyard work: Cabernet Sauvignon (49%), Merlot (37%), Cabernet Franc (11%), Cabernet Franc (11%), Petit Verdot (2%), Carmanere (1%), average age 53 years (among the oldest in the Médoc). planted to 8,500-10,000 vines per hectare. Double guyot training. Organic farming has been tested over the past decade, but the majority of the vineyard follows sustainable viticulture, with any treatments kept to a minimum. Strict plot-by-plot viticulture, as at Mouton Rothschild.

Vinification: The 3,500 square metre winery is entirely gravity-led, with energy provided by 300 square metres of photovoltaic cells providing 100% of the energy needs. Wine is made in stainless steel vats, with 40 of them allowing precise plot by plot vinification. Wines are aged for 16-18 months in oak, with around 30-40% new barrels depending on vintage. Fresh egg white fining.

Recent improvements or changes: New gravity-led winery opened in 2011, from architect Bernard Mazieres and interior designers Richard Peduzzi (who worked on the Louvre and the Musée d’Orsay in Paris). 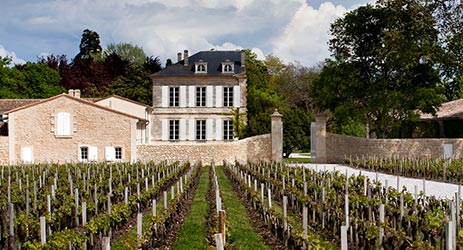