Here's the story of the Monasteries and Clos de Vougeot in 12th Century Burgundy, from Oz Clarke's book, The History of Wine in 100 Bottles. 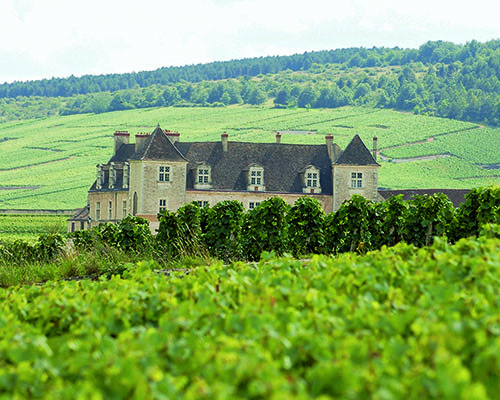 The easy way to look at the Dark Ages is to think of it as a period of unremitting gloom and slaughter and the loss of all the finer things in life, with the flickering flame of culture being kept alive in the silent halls of Europe’s monasteries. And the preservation of a wine tradition brought to the rest of Europe by the Romans is central to this.

Well, there’s no doubt that a mix of bishops and monasteries did play an important role in keeping wine going until the Middle Ages, but there’s also quite serious evidence that the marauding tribes who kicked out the Romans were pretty keen on wine and were also keen to keep the supply of it healthy.

Burgundy is thought of as the birthplace of the great tradition tying wine to monasteries, although the first monastery was probably at Trier on Germany’s river Mosel in the early 4th century. But it was the power of the bishops that supported vineyards and winemaking for the next few hundred years.

And this was not just through preservation. The bishops had the power to promise salvation and eternal life. Lots of noblemen thought a gift of good vineyards would help towards this goal. And the view that the Church had to create and work its own vineyards to produce wine for the Eucharist is only partly true – tithes in wine were common, as were simple gifts.

The importance of the monasteries stems from the Middle Ages. The Benedictines were the first great order to influence the world of wine. The Cistercians were the next. Both of them had their greatest abbeys in Burgundy: the Benedictines at Cluny in the hills behind Macon, and the Cistercian order at Cîteaux in the dark forests opposite Nuits-Saint-Georges. The Benedictines rather lost their reputation for austerity as they built up vineyards in Burgundy’s Gevrey- Chambertin and Vosne-Romanée, but also in the Rhône, Champagne and the Loire. Many of these may have been donations, but the Benedictines were also planters. Since the 6th century they had been active in Germany, planting in the Mosel and Rhine valleys, and Franken, and also in Austria and Switzerland.

The Cistercians were founded in 1112 as an austere riposte to the indulgent Benedictines. But they too knew the value of vines and wine, to use for themselves, but also to trade. They developed vineyards in Champagne, the Loire, Provence and Germany – the great, gaunt Kloster Eberbach on the Rheingau was theirs. But their biggest influence was in Burgundy. They may well have been helped by the fact that there were eight Crusades between 1097 and 1291, and knights would try to shore up their chances of eternal salvation with donations of land before they left. Their greatest legacy is the walled vineyard of Clos de Vougeot, which was fully enclosed by 1336. But all along Burgundy’s Côte d’Or, or Golden Slope, they set to work to minutely understand and define every tiny parcel of vineyard land, painstakingly plotting the good and bad points of their geology and microclimate, and then comparing and defining their different flavours. Each plot was delineated, and the ‘cru’ system by which each batch of wine is kept separate and named separately – a fundamental part of how Burgundy is judged and appreciated – was started by the Cistercians at Vougeot.