A variety of Chinese wines were featured at Vinexpo tastings to ‘further improve the image’ of the country’s wine production amongst the international trade, when domestic producers are still focusing on the domestic rather than export market, said official.

17 Chinese wines from 8 Chinese wineries were presented to approximately 70 trade visitors at a 90-minute tasting co-hosted by the European Committee of Wine Companies (CEEV) and China Alcoholic Drinks Association (CADA) on the fourth day of Vinexpo Bordeaux.

Though still facing difficulties such as extreme weather in north China and excessive rain in the coastal regions, the Chinese wine production have shown visible improvements in quality in recent years.

‘The primary reason to the Chinese delegation’s visit this time is to demonstrate Chinese domestic wines to a wider audience, including international trade professionals and consumers,’ Wang Zuming, head of the wine division of CADA, told DecanterChina.com.

‘It will stimulate domestic wineries to strive for higher quality, and improve the image of Chinese wines in the international trade.’

However, he stressed that exploring the export market wasn’t the key purpose, as the main sales focus of Chinese producers is ‘still the domestic market’.

The wines featured at the tasting were mostly from Ningxia, Xinjiang, Hebei and Shandong, showing grape varieties ranging from international varieties such as Cabernet Sauvignon, Merlot and Chardonnay, to domestic varieties such as Long Yan (dragon eye).

A Vidal-based ice wine from the Huan Ren region, Liaoning province and a Chinese brandy made from Ugni Blanc were also presented at the tasting.

Selected by CADA, these wines ‘demonstrated all the key regions, varieties and styles of quality wines produced in China,’ said winemaking consultant and DecanterChina.com columnist LI Demei, who presided over the tasting.

The tasting was part of a two-year cooperation programme between CEEV and CADA which aims to enhance the cooperation between the European and Chinese wine industry. The cooperation was launched in March 2014 as a settlement to China and EU’s trade dispute on wine.

Upcoming activities include trainings on viticulture machineries, and communications in law and regulations, said Wang Zuming.

‘Both the CEEV and CADA are now discussing the possibility to extend the cooperation beyond the two-year period,’ said the official. 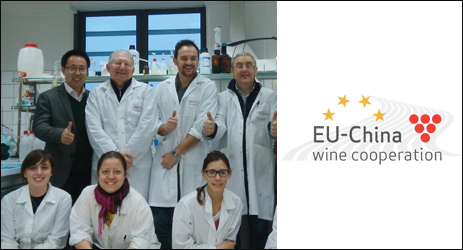 China’s next generation of winemakers perfects skills in Europe

Key factors to the quality of wine