Chinese customs police have caught a driver attempting to smuggle more than 100 bottles of wine and spirits over the border from Macau, highlighting an ongoing battle for officials.

Police at the Port of Gongbei found 121 bottles of wine and spirits wrapped in boxes and tissue paper and concealed in a special compartment beneath the boot of the car, according to the Gongbei customs authority.

The driver was travelling from Macau to Zhuhai, Guangdong Province.

It is the latest of several smuggling attempts that police have prevented in 2014. Some people had been found trying to smuggle wine using baby buggies, while others hid stocks on a tourist coach.

Among the wines seized this year were more than 730 bottles of Penfolds and a few red wines of Chateaux Lafite Rothschild and Mouton Rothschild, according to authorities.

Sneaking wine into mainland China from both Macau and Hong Kong without paying duty is not a new phenomenon. Specific figures were not available, but it is likely to only represent a small proportion of the overall Chinese wine market.

Still, Yu Guangzhou, director of the general administration of Chinese customs, demanded earlier this month that officials need remain constantly vigilant. Customs police must ‘strictly guard the gateway to the country’, he said at a ceremony to mark the appointment of a new Gongbei customs director.

Some local media reports have suggested that high duty tax for imported wine in mainland China, versus a zero tariff policy in Hong Kong and Macau, provides would-be smugglers with an incentive and makes it a hard battle for customs officials to win. 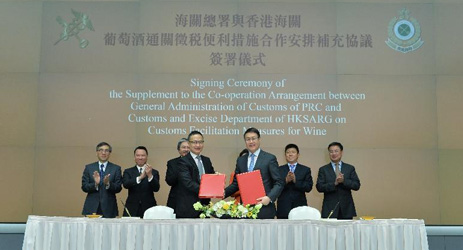