A Tibetan vineyard sitting at more than 3,500 metres above sea level has been recognised by the Guinness World Records as the highest vineyard of the world.

Situated on an altitude of 3,563.31 metres, the ‘Pure Land & Super-high altitude vineyard’ in Cai Na Xiang, Qushui County of Lhasa, Tibet, has been recognised as the world’s highest vineyard.

Its status was recognised by Guinness World Records adjudicator Iris Hou, who issued the official certificate on 27 Sep 2018.

‘The record was the first ever set for “Highest Vineyard”,’ a spokesperson for Guinness World Records told DecanterChina.com.

A few other sites come close to the one in Tibet, and notably those in Argentina’s Salta region. Vineyards at Colomé Estate, for example, sit at 3,111 metres above sea level.

The world record-setting 1000mu (66.7ha) of land under vines on the Tibet Plateau is planted with 11 varieties, include: Vidal, Muscat and an indigenous Icewine variety named Bei Bing Hong, according to Rong Shun Biotechnology Development Ltd, which is responsible for the vineyards.

The company started planting vines at the site in 2012.

After initial failures in other locations, the growers noticed that in the Cai Na area—the name itself in Tibetan means ‘source of vegetables’— vines could survive and mature well in the gardens of local houses.

‘We soon realised that viticultural know-how from lower-altitude vineyards was useless when it came to planting vines on the high altitude areas of the Tibet Plateau,’ said a spokesperson of Rong Shun Biotechnology Development Ltd.

Though high altitude can yield more sunlight and less risk of disease for viticulture, growers in this area of Tibet can also face severe challenges, such as temperature drops and drought in spring, sunburn on grapes and storms in summer, as well as early frosts in autumn and sandstorms in winter.

Techniques used to cope with the conditions include dry farming in spring, relatively late picking and irrigation systems imported from Israel.

Rong Shun Biotechnology said that it planned to expand vineyard planting on the Tibet Plateau, with support from the local government’s poverty relief initiative.

The company said that it also planned to build production and wine tourism facilities to help create jobs in the area. 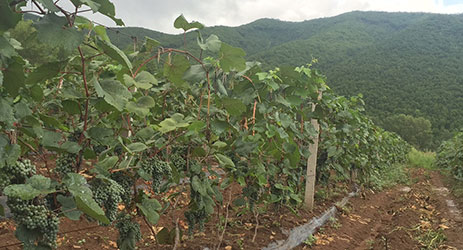