‘The ambition and drive you find in Ningxia is infectious’

She began at the winery 17 years ago as a vineyard worker, soon after it opened as a government-backed operation in 1997. She worked her way up through the ranks to her current job after it was taken over by Pernod Ricard in 2008 (first as a joint venture, now wholly owned), and is today in charge of making 74,000 cases each year from 132ha.

Ren learned winemaking at Northwest University in Xi’an City and through on-the job training, but is from the village where Helan Mountain is based, where her parents first planted a hectare of vines 25 years ago. As a child, her village and those nearby were regularly obliterated by sandstorms. These have almost entirely ceased since the local government bulldozed dunes and laid irrigation channels in the Gobi desert along the foothills of the Helan mountains to make way for the vines, planting swathes of forest as an extra windbreak.

Today Ningxia Hui autonomous region is most dynamic wine area in China. Pernod Ricard’s impressive facility lies along a newly constructed road that takes you along hundreds of kilometres of vineyard (or potential vineyard) lined with wineries, none of which date beyond 1997, and the vast majority less than five years old.

Cabernet Sauvignon is the main grape in the region, though there are some interesting experiments with Marselan, and the wines are racking up an impressive number of international awards. The ambition and drive you find in Ningxia is infectious; it took just a day before I was itching to make my own wine there.

The local government offers long leases of 50 years for companies wishing to invest in wine, extended to 70 years if they build a winemaking facility, and hopes to more than double the existing 40,000ha of vines in the region over the next few years. It also offers equipment rental, oversees local vine nurseries to protect against trunk disease, funds sales and promotional trips, and has effectively used government policy to make wine a key pillar of the economic future of the region. Half of all overseas visitors to Ningxia come for this; it’s blindingly obvious why.

For locals looking to break into the industry there is now a Ningxia wine university, started in 2011, that has 650 undergraduates and 150 masters and postgraduate students learning everything from viticulture to wine marketing under impressive teachers such as microbiologist Dr Gang Jin and oenologist Wen Ma, who did her post-doctorate in Bordeaux.

To take all of this to the next level, the university has a lot resting on its shoulders. During a four-day visit to Ningxia we toured dozens of wineries, some recreated in the shape of Loire châteaux, others with traditional Chinese design. Their cellars were filled with the latest equipment, from horizontal presses to rows of new French oak barrels.

And yet there were clear signs that basic winemaking best-practice was not always being followed. The main issues were TCA in corks, premature ageing or colour-loss in young wines, and harsh acidity levels. One of the most modern wineries I visited had left barrels empty without cleaning sufficiently, and had allowed acetic acid to take hold.

Dr Jin said bottles were often not left upright for long enough, allowing the wine to leak before the cork fully expanded. Winemakers might also adjust the naturally low acidities of the region with too much tartaric acid at the wrong point in the winemaking process. Further issues can arise from well-meaning and often high-profile consultants who don’t spend enough time training cellar staff to continue with the job in their absence.

The good news is that these issues are almost all easily fixed. And that is an inspiring lesson for all winemakers – in China or anywhere. Being meticulous about the details goes a lot further than a large cheque. 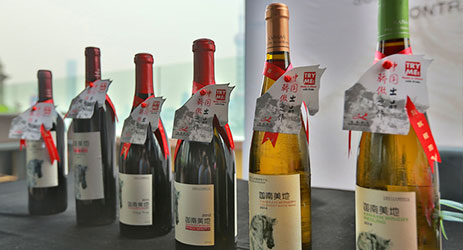