The threat of hazardous weather conditions across Ningxia has spurred the planned introduction of a new disaster indicator system which could significantly improve wine production in the region.

According to the Ningxia Meteorological Bureau, the digital indictor is expected to assist in the prediction and assessment of potentially problematic weather conditions for agricultural production including wine production across the province.

The move comes as winter and spring frosts were highlighted as major hazards for viticulture activities by the local meteorological authority in a seminar last month.

Currently in Ningxia, vine growers need to bury their vines over the winter, and dig them out in the next spring, due to the severe winter freeze in Northern China.

‘Severe cold air from Siberia dominates this area in the winter with prevailing northwest winds. In spring, plants often face damage from late cold spells when they have just sprouted. This is probably one of the main reasons for the Chinese wine industry not having developed more extensively throughout the course of history,’ Li continued.

The seminar, which involved scholars from national scientific institutions including the Chinese Academy of Meteorological Sciences and China Agricultural University, as well as local agricultural and forestry authorities and wine producers, discussed improvements for the prevention and control of such hazards as well as the call for closer cooperation between the groups involved.

The implementation of the high-tech weather indicator coincides a number of steps being taken in Ningxia to increase the quality of wine production in the region, including the introduction of a classification system in 2013. Ningxia also follows other notable wine- growing regions around the world who take preventative measures against frost and hail including Chablis in Burgundy, Sonoma County in California and Barossa Valley in Australia. 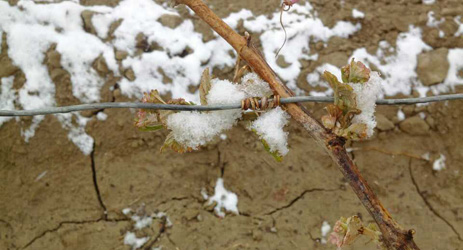