If you travel in French wine regions and meet French wine growers, you’re likely to hear that a certain percentage of the land they farm is a ‘fermage’ or, more rarely, a ‘métayage’. What’s meant by these terms?

A fermage is a piece of land which is owned by someone other than the person cultivating it: a farming tenancy, in effect. In 2010, two-thirds of all French agricultural land was tenant-farmed. Because vineyard land tends to inspire affection in the families who own it, even when they have become involved in other activities, fermages are very common in French wine regions — though you may not necessarily be aware of this from wine labels.

By far the largest parcel of Montrachet, for example, is the 2 ha and 6 ares of the Puligny side of the vineyard sold by Drouhin – though the owner, since the C14, is the family of the Marquis de Laguiche. Drouhin’s label makes the land ownership clear (and in any case this arrangement is more partnership than classic fermage).

What is less well-known, and not evident from labels, is that the celebrated purchase of William Fèvre’s mouthwatering 40 ha domain in Chablis (including 12 ha of Premiers Crus and 16 ha of Grands Crus) by the Henriot familiy’s Bouchard Père et Fils in 1998 did not include ownership of the land itself, which stayed with the Fèvre family. You could argue that since the Bouchard team do all of the cultivation and vinification, theirs is the only signature which matters, but it was initially a fermage. Matters have changed subsequently, and Bouchard now owns about a third of the land.

There are often tensions in viticultural fermage arrangements, as might readily be imagined. A tenant who works particularly hard to improve the quality and reputation of a vineyard or set of vineyards in order to obtain a higher bottle price will see all the longer term benefits in terms of vineyard improvement and reputation accrue to the landlord. Tensions can also arise since the primary responsibility for the installations and planted vines themselves lies (according to article 1719-4 of France’s Code civil) with the landlord, and landlords are less readily disposed to invest in vine quality than their tenants might wish. In our age of trunk disease (about which I will provide an update before long), this problem can become acute.

Vineyard landlords, though, also have reasons to feel hard done by, since the primary legislation affecting agricultural tenancies dates from the 1940s, with its very different rural scene and interventionist political policies. Rentals are fixed by the government within certain value bands. Tenancy periods (usually for nine, 18 or 27 years) can almost always be renewed by the tenant if the tenant wishes, even if the landlord would like to sell the land. In such a case, the tenant has first right of refusal on purchase of the land, and is also entitled to turn to the law if he considers the price excessive.

In a viticultural fermage agreement, the tenant pays the landlord money in return for land; not so in a métayage agreement. There the grower pays the landlord in kind, with grapes – usually two-thirds to the grower and one-third to the landlord. Sharecropping arrangements of this sort are considered less effective than fermage arrangements, since there is less incentive for growers to optimize their work, and in general no more than one per cent of all French agricultural land is worked in this way. In at least one wine region, though, it is still regularly encountered, as I found to my surprise last year.

“Beaujolais was the part of the French countryside where there was the most métayage. It’s true all over the region, but the crus are more behind than other parts. For me, in the crus, it’s still the Middle Ages.” The speaker is Dominique Piron, the Président of Inter Beaujolais, and a winegrower with deep family roots in Morgon, so he knows his subject. He fleshed out the story when I had lunch with him in Fleurie’s Auberge du Cep last October. It’s one which illustrates the often slow pace of change in rural France.

“Under Napoléon III [who ruled France between 1852 and 1870], France did well, and Lyon in particular did very well. Metallurgy, the silk industry, engineering – many fortunes were created, and all these industrialists tended to invest in Beaujolais. It was the prettiest region, under three hours by horse from the city, and they all came here with their families. But these proprietors never played the role of economic leaders; they just came at weekends, or in August. Their children and their grandchildren didn’t invest either, and they didn’t buy up each other’s shareholdings, so gradually the ownership became very complicated. All the installations were in a bad state; the buildings were falling down; after 150 years of métayage, there was a lack of family culture, of vision, of transmission.”

According to Piron, “all the big old properties” have consequently been sold over the last few decades, and this has had the advantage of providing new land to those who were ready and able to invest, though the métayers have often lost out.

The inertia and lack of vision which was the legacy of a sharecropping past remains in evidence, though, particularly in the crus. “In southern Beaujolais, the vineyards have been renovated, the properties are larger, and that works very well. If we organize a technical meeting, all the people from the south come. In the north, the attitude has been ‘My grandfather did things like that and I don’t see any need to change.’ It’s drawing to an end, now, with the younger generation, but I point out to people that the recent crisis in Beaujolais wasn’t a normal crisis of sales like it might have been elsewhere. It was the result of almost two centuries of history.”

Last year provided a perfect emblem of that transition, when one of the largest properties in the crus, the magnificent 99-ha Ch de la Chaize at Odénas in Brouilly, was sold to the Président of the Lyon-based infrastructure, real estate and ‘well-being’ Groupe Maïa, Christophe Gruy. It wasn’t wholly typical, in that the property has been in the hands of the Roussy de Sales family since 1735, prior to Lyon’s industrial revolution, and Chaize had been, by all accounts, well-run. The property did, though, have seven métayers – including Armand and Céline Vernus of Ch Moulin Favre.

Christophe Gruy wanted to convert the whole domain to organic cultivation, so he needed his métayers to follow suit; the only alternative was to convert to a fermage (since the wine would not then appear under the Chaize label, organics wouldn’t be necessary). In the latter case, though, the new fermage tenants would need a cellar of their own — which not all the métayers had.

As a consequence, all of the seven métayage agreements have come to an end, Céline Vernus told me. She and Armand have switched to fermage, reducing their tenancy from 8.5 ha to 5 ha (they have other vines of their own to work with, as well as a well-equipped cellar). Two of the other métayers have become Chaize employees, and the rest have been bought out of their métayage agreements. Thus Beaujolais’ sharecropping past, and that of France as a whole, is slowly drawing to a close. 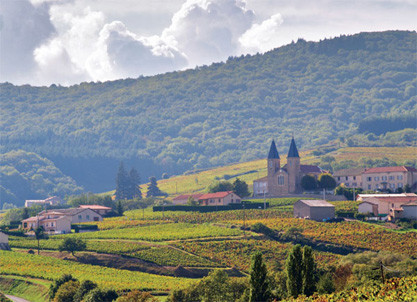