Vines flower with radical discretion. My second visit to Bordeaux this year coincided with the beginning of flowering: that shy lifting of the cap (in fact a fused bonnet of petals), revealing the five yellow pollen-dusted stamens and the green pistil (composed of stigma, style and ovary) at their heart.

Difficult flowering conditions weren’t the only anxiety up and down the quaysides. Yet again, Bordeaux has overpriced its latest offer: the weakest set it had offered the market for two decades. Uptake has been weak: these are wines whose main appeal should have been as bargains. As of last week, Farr Vintners (with Berry Bros, one of the two main en primeur merchants in the UK) had sold just £1.3 million’s worth of 2013s, compared to almost £70 million’s worth of 2009s en primeur, and almost £36 million’s worth of 2010s. There are persistent rumours that some Bordeaux négociants are on the brink of failure. A fourth successive unattractive Bordeaux vintage would send them toppling.

These visits gave me a chance to talk to those on both sides of the producer-négociant divide. Trust between the two seems to be evaporating, with some négociants feeling that the owners are living in a Gatsby-esque world of international dinners, label signing and adulation, whereas the sales reality (from which they are insulated by Bordeaux’s two-tier system) is of slack demand and baulking purchasers. Bordeaux 2009 and 2010 are two of the greatest vintages in the region’s history – yet in times of revived global prosperity and an equity boom, and after three weaker vintages, the UK’s leading supermarket chain still found it necessary to discount the 2009 wines of four of the five First Growths a little earlier this month. Lingering disinterest of this order is without parallel during any of the Bordeaux crises of the past 30 years.

Wine investment funds, too, continue to cause disquiet, and are regarded – at least by Bordeaux’s old school – as suspiciously disruptive of the long and healthy tidal relationship between producers and drinkers. The China bubble, prior to President Xi’s anti-corruption drive, was of course a major factor in Bordeaux’s recent gross price inflation, but the funds have played their part, too. There are rumours that a major South Korean fund will begin selling soon, taking yet more stocks back onto a market hardly panting for them. Red-blooded investors will surely be losing patience with the weak pulse of the wine funds at a time when opportunities elsewhere beguile.

Meanwhile, and perhaps paradoxically, land prices in the best parts of Bordeaux continue to soar. The fact that François Pinault and his Groupe Artemis has recently arrived in Pomerol (via a significant shareholding in the Guichard-Goldschmidt group of properties: Siaurac in Lalande-de-Pomerol and Le Prieuré in St Emilion as well as Vray Croix de Gay in Pomerol itself) has caused alarm in an area where the small size of properties traditionally allowed family ownership to flourish and endure. Recent Pomerol transactions suggest that land there is now worth three million euros a hectare, more even than Pauillac; some purchasers are rumoured to be ready to pay up to a million more than that. These prices put local families well out of the game.

A linked phenomenon on the left bank is ‘the disappearing cru bourgeois’, particularly in the Médoc’s leading communes. The second (or third) wines of leading Bordeaux properties are never called ‘Château’ this or that: they simply carry brand names. Those coat-tail brands, however, give them an earnings capacity notably in excess of what any independent cru bourgeois could ever hope for. Any land for sale can be snapped up by big properties even if they know that it stands no chance of inclusion in a grand vin – since it will bulk out the brands which those properties can force-sell (by tying any purchase of the grand vin to much larger quantities of the lesser wines).

The gloom isn’t total, of course; in most years, Bordeaux continues to produce colossally more fine wine, and wine of better balance, complexity, intrigue and ageing potential, than anywhere else in the wine world. There are many fairly priced wines from middle-rank recent vintages (especially 2011, 2008 and 2006) which offer excellent value. One day, the great vintages will be back; one day, the slack will wash out of the system. Perhaps, though, not soon. 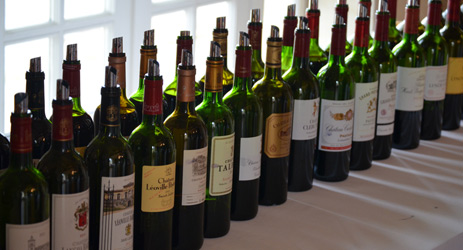