My tasting year got off to a catapult start back in January. Here’s the first raw note of 2015.

‘Very dark. Scents of mushrooms, animals, sour forest plums, dust after rain. Engaging, fresh, pristine: I can’t keep my nose out. Fine vitality and density on the palate; indeed almost an assault of brisk tannins, sizzled bacon, chocolate plums. Sloe-impregnated acidity: natural, round, ringing. Exciting, compelling, forceful, strong wine in which the earth seems not merely to speak but to shout and sprint, too.’ The wine was the 2012 Les Secrets de Montmirail from Domaine Brusset in Gigondas. On the strength of its credentials, I decided to spend most of two days at the Rhône Découvertes Avignon event in March 2015 (complete with a Mistral so strong it blew away the lunch tent) tasting Gigondas.

Wow: how this appellation has advanced in the last decade, and what a special place it seems to be! These aren’t, yet, the most consistent wines of the Rhône; out of the 110 or so wines tasted, I gave scores of 16.5 or more to 29 of them (the score doesn’t matter other than as a general benchmark for desirability). Briskly, though – briskness is in the air in Gigondas – here are the two reasons why I think this is a wine place we should all take more seriously.

First, because it lies close to Châteauneuf-du-Pape, uses the same mix of principal grape varieties, and yet smells and tastes utterly and comprehensively different to Châteauneuf. Obviously there are physical cotrasts: a big mix of soils (red clay in some places, and blue marl in others; elsewhere sandy, or with limestone pebble detritus), and often a higher altitude, with a higher percentage of northern expositions, and the jagged limestone cliffs of the Dentelles de Montmirail towering over all. There are bigger diurnal temperature differences here in summer than at Châteauneuf. Yet it’s also testament to something the French still seem to do more successfully than any other wine nation, which is to vinify in a manner which allows difference to come into being, and to be expressed with maximum force and pungency. There seems to be no desire to force wines to conform to anything other than what we might call their genetic destiny, no matter how singular nature’s efforts might be. And nature can be almost troublingly articulate here.

Is this, indeed, the French appellation with more ‘sense of terroir’ to it than any other? If you love red wines whose aromas and flavours begin with fruit, but then lift off allusively in other aromatic directions, take a good look at Gigondas. It does this supremely well. Sometimes almost to excess; a glassful can be so stuffed with apothecary plants and bushes that it finishes almost medicinally. I’m not a fan of acid for its own sake, but the flavour-saturated, spring-heeled, energetic Gigondas acidity is compelling. And there are plenty of different ways of embodying this potential here, from the near-burgundian finesse of the true mountain Grenache style to something much chewier and denser from lower-lying, old-vine Grenache, from Syrah and from Mourvèdre.

The Secrets de Montmirail, by the way, is made from three special rows of vines up at 350 metres under the Dentelles which get morning sun rather than afternoon sun; all three of the main varieties are in there, and it’s a wine which sees only 10 per cent oak. I also tasted Brusset’s 2013 Hauts de Montmirail, and that’s another hugely successful wine – again soaringly aromatic, with quivering, densely bonded acidity, but with a warmer spectrum of allusions this time (honey, lavender, warm stones). 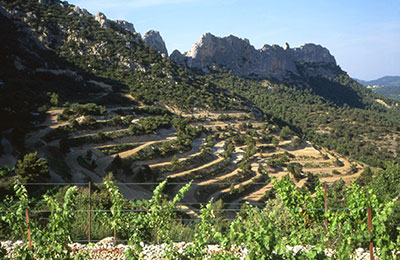 In the right hands, 2013 can be a very successful vintage here, and it would be immoral to write more without signalling just how astonishingly good are the 2013 wines from Louis Barruol at Ch de Ste Cosme. Barruol is a wine craftsman who never seems to stop improving, and his commitment to fruit sorting and to whole-bunch fermentations, stems and all, mean that these are wines which don’t just glide beautifully past you in dreamlike serenity but which catch you and tumble you and leave you moved and disturbed in equal measure.

The range had just been bottled, but they were all showing splendidly, from the fruit-splashed and flower-flayed Gigondas via the fragrant but rich Valbelle, the supremely sensual Claux, the thundering yet almost elegant Hominis Fides and the darker and more brooding La Poste, the only wine of the quintet to seem closed at this stage. (Barruol harvested his entire crop in three days in 2013, between the 15th and 18th of October.)

There were two more very fine and impressively contrastive 2013 wines from Philippe Cartoux at Domaine des Espiers: the plain Gigondas was an aroma bomb, full of floral finesse but supported by sinewy tannins, while the old-vine Cuvée des Blaches was gutsy, earthy, fierce and unapologetic, packed with plant distillates: a wild man of the hills. (The Grenache is destemmed here, but not the Syrah.)

In general, though, it was the comely 2012 vintage which shown at Avignon. The 2012 Gigondas and the 2012 Font de Tonin from the Faravel brothers at Domaine la Bouïssière, whose vineyards also nuzzle the Dentelles, are worth searching out: the former a shower of cherry blossom and cherry; the latter a much denser, more deeply composted wine whose 90% old-vine Grenache also keeps its stems. Stems aren’t essential for magnificence, though. Domique Ay destems everything, yet his 2012 Gigondas had all the grandeur and wealth this midweight vintage can summon up.

For high-altitude Gigondas in a lighter and more graceful style, look out for the attractively priced Pas de l’Aigle cuvée from Pierre Amadieu, the appellation’s biggest landholder; the 2011 vintage here was full of pine needle and wild strawberry, both complex and accessible. Other fine examples of the appellation in airy, soft, open-pored mood are the almost burgundian 2012 Costevieille from Bastide St Vincent; the resonant 2010 Mas des Restanques; the fragrant and refined 2013 Combe Sauvage from Fontavin; and the insistent, intense 2012 Vieilles Vignes cuvée from Le Grand Montmirail. Eric Saurel from Montirius showed older wines from 2006 to 2009 which also brought out the grace, elegance and refinement which Gigondas vineyards can achieve.

I tottered out into the icy northern blast and was wind-scooted across the Place du Palais and down towards the railway station like human tumbleweed. That, though, was only the shell of me; inside, I was still full of the scents of pine, lavender, juniper, peony, sloe and damson of summer under the Dentelles. And very grateful too.