Nice when it works out – and, for whatever reason, the world is thirsty for the wines of my adopted region at present. During 2014, AOP sales from Languedoc and Roussillon were up by 7.7 per cent in value and 5.9 per cent in quantity. The news was particularly good from China (where the equivalent figures were up 29 per cent and 32 per cent) and the USA (17 per cent and eight per cent); these are now the two largest value markets for the region.

Coincidentally, I’d just had the chance to take part in a large, privately organised blind tasting of top Languedoc red wines with samples purchased from across the region. The wines were tasted in flights against their price and vintage peers, but mixing the appellations – which was instructive. Here are a few conclusions.

In contrast to elsewhere in France, 2013 was a superb vintage in Languedoc-Roussillon. The whites are on the market already, but only the younger, juicier reds have bobbed up as yet. There were two outstanding 2013 wines from the St Chinian domain of La Grange Léon, sited up in the schists of Berlou: the floral, citrusy L’Insolent and the deeper, lusher L’Audacieux (both attractively priced, at under €10). Paul Mas has made a success of the vintage: the richly constituted 2013 Pézenas wine from his restaurant series Côté Mas and his smoky, lush, Syrah-rich 2013 Clos des Mûres from Château Paul Mas both scored well against their peers. Over in Corbières, the 2013 Cuvée Reservée from Ch La Voulte Gasparets in Boutenac showed outstanding aromatic finesse for a blend which includes 50 per cent Carignan. The Syrahs of Domaine de l’Hortus in Pic St Loup are usually some of the most beguilingly scented in the whole of Languedoc and, in the 2013 Bergerie de l’Hortus, they have even more thyme-flower charm than usual. While we’re on the subject ...

What is INAO up to? An appellation for Pic St Loup is now embarrassingly overdue; all the signs were that it would emerge in 2014, but as of March 2015 the Pic is still only a ‘denomination’ of the overall Languedoc AOP. The tasting provided further proof of the enormous potential of this, the most northerly, the airiest, the coolest and one of the moistest of Languedoc’s key zones. At under €10, there were very attractive wines from Mas Gourdou (the structured, warm 2012 Les Roches Blanches) and Clos des Augustins (the richer, more spicy 2012 Les Bambins).

Among the ambitious wines of the Pic, you’ll find more beautiful Syrah perfume evident in Mas Brugière’s shapely, beguiling 2012 La Grenadière (in this vintage just a little fuller than neighbour Hortus’s Grande Cuvée). Another masterful Pic wine for its synthesis of floral grace with black fruit wealth is the 2012 Larmanela from Guilhem Viau at Bergerie du Capucin. In a sheltered site on the south side of the Pic, Mas Mortiès’ powerful, cellar-seeking 2012 Jamais Content is certainly the best example of this ambitious cuvée I’ve yet tasted: a wine to pour into a very large glass. If you’re not afraid of unexpurgated tannin, the 2012 Simon from Clos Marie is challenging and complex.

Hidden inside a strong flight of appellation wines costing between €20 and €30 was Languedoc’s most celebrated IGP, the 2012 Mas de Daumas Gassac. It showed well, coming a very close third to the 2012 Combariolles of Mas Cal Demoura (see below) and that Grenadière from Mas Brugière, and confirming my view that the new Guibert generation – Samuel, Roman, Gaël and Basile -- are doing a fine job in bringing more density, expressive force and overall excitement to this wine than it had a decade ago. It seemed effortlessly Languedocien, too, not a Bordelais in exile; the Cabernet component brought nobility of flavour to what has to be the strangest varietal blend in France (Please refer to my June 2014 column of the Decanter magazine) 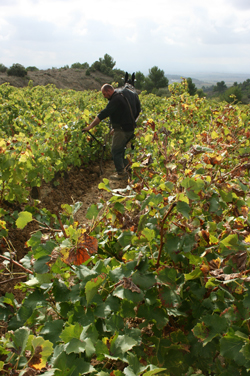 There’s no doubt that many ambitious Languedoc reds are exuberant -- to a fault. Impressive wines showing more subtlety and grace than their peers included the warm, open-textured, plumply tannic but finally meditative 2009 Solen from Domaine d’Aurelles near Pézenas and the remarkable 2012 Combariolles of Mas Cal Demoura in Terrasses du Larzac, with its finely detailed aromas, structured yet perfumed palate and overall sense of both authority and freshness. The 2012 Cistus from La Linquière in Faugères was gratifying, too, for its softness, poise and craftsmanship, and I should also mention Mas de Martin’s 2012 Cuvée Ultréïa here, too, from Christian Mocci’s Grès de Montpellier domain: a very elegant, dense and serious wine which would reward an evening’s close attention.

We will rock you

There was plenty of showy grandeur in evidence, though, too, and almost all of it Syrah-derived. New from Axa Millésime’s Mas Belles Eaux near Pézenas is the sensually enticing 2012 Carmin, a parcel selection of the domain’s best Syrah: it takes the pure plum fruit which threads the domain’s other cuvées, including the increasingly impressive Ste Hélène, and amplifies it to exciting, orchestral effect. (Hard not to stroke the velvety label, too.)

Marlène Soria’s lengthily aged, ambitiously priced Domaine Peyre Rose wines leave few tasters unmoved. We looked at three of them. The creamy-sweet, young-vine 2005 Marlène No 3 (Syrah-Grenache) was underwhelming when set against its price peers, but the 2004 Syrah Léone and the 2005 Clos des Cistes (also Syrah-dominant) were both wines of shocking grandeur: the former a monumental, wildly extractive, steamroller-like wine but detailed and perfumed if you are able to peep beneath the scary pectoral tannins; while the latter is pure baroque extravagance, packed with liqueur-like charm, but hard not to like, and ageing as slowly as the faces on Mount Rushmore.

Rubbing shoulders with this pair, but without any sense of intimidation, was the 2011 Porte du Ciel of Ch la Négly, and the 2011 Clos des Truffiers which Jean Paux-Rosset of La Négly co-owns with Bordeaux négociant and long-term Languedoc supporter Jeffrey Davies. (Porte du Ciel is a Syrah from La Clape, whereas Clos des Truffiers is older vine Syrah from St Pargoire, not far from Marlène Soria’s domain.) The Porte du Ciel was a kind of ‘snow falling on cedars’ sort of wine, very smooth, soft and feathery, and the snow very sweet; it grows more unctuous on the tongue. The Clos des Truffiers has more aromatic resource to it (bizarre, but I really did jot ‘truffley’ before knowing the wine’s identity), and there’s more depth and upholstery to the palate, with the same liqueur-like qualities possessed by Soria’s Clos des Cistes; I found a point extra for the Truffiers on my scoresheet. (Among Languedoc’s other grandees, La Péira and Mas Jullien, by the way, were both missing, as was Gérard Bertrand’s Clos d’Ora.)

Languedoc is still the wild south – there were plenty of unsuccessful wines scattered among the stars, and brett remains a recurrent problem here – but it’s more exciting than ever. As the world seems to be noting. 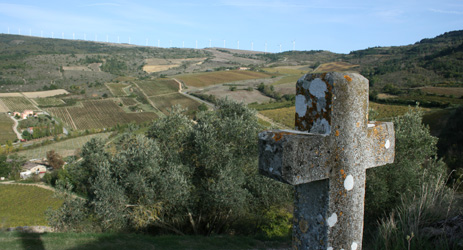 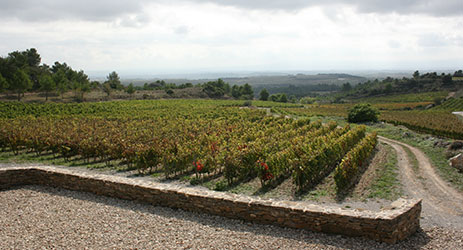