Suggestions that Burgundy's most renowned wine labels, and particularly DRC, may have risen to unsustainable heights continue to prove unfounded for the time being.

At the Sotheby's spring wine auction in Hong Kong over the weekend, six bottles of Romanee-Conti 1990 fetched almost HK$1.35m (US$173,000), making it the most expensive wine lot sold by Sotheby's anywhere so far this year. The lot's high estimate was HK$1m.

Although there continued to be signs that Bordeaux is working its way back into buyers' good books, it was top end Burgundy that really shone in the Sotheby's sale.

A three-magnum haul of Jayer Vosne Romanee, Cros Parantoux 1982 more than doubled its high estimate of HK$200,000, fetching HK$490,000. All the lots were sold to private buyers in Asia.

Many of the lots that beat their high estimates in the two-day sale came from the cellar of ex-US Ambassador Ronald Weiser.

Sotheby's said the Weiser cellar wines were 100% sold and fetched around HK$17m, beating the pre-sale high estimate by 30%.

However, the Weiser cellar results were not enough for the auction house to beat its top estimate of HK$100.7m for sales from the entire auction. Overall sales from the weekend reached HK$99.5m, with 37% of lots beating their pre-auction high estimate.

Nicknamed the 'chicken cup' due to the rooster and hen on its design, some have speculated the cup could have been used for wine, but there appears to be little evidence for this. 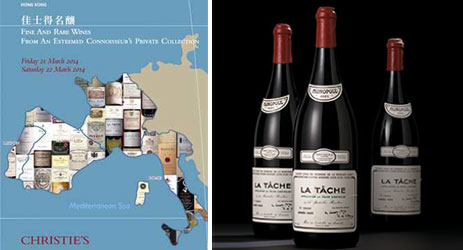