It might seem that the character of wine is a simple matter of grape variety, influenced by terroir and conditions of winemaking, but there’s an unseen hand in every wine – the yeast that fermented the juice.

The gooseberry aromas of Sauvignon Blanc, the lychee of Gewurztraminer, the strawberry notes of Pinot Noir – none of these are found in the grapes, but they are released or created by yeast during fermentation.

Of the thousand or so compounds that determine the flavour and aroma of wine (most present in vanishingly small amounts), very few can be tasted or smelled in the grape, which is why wine does not taste like grape juice plus alcohol. (Almost the only exception is Muscat, where both the grape and wine have the same ‘grapey’ smell, due to specific compounds called terpenes.) So, how far are yeasts responsible for what you smell and taste in wine?

‘A selected yeast can account for about 10% of the sensory definition of wine,’ Michel Feuillat used to say at the University of Burgundy. This is a good way of describing what yeast does – all yeasts convert sugar to alcohol, but a particular yeast may make more or less of certain aroma and flavour compounds during fermentation. However, Ann Dumont, a yeast producer at Lallemand, says: ‘Yeast cannot create new flavours out of the blue. It will transform what’s in the berries, not only into alcohol, but also into aroma compounds. Yeast will work from the raw material that it is supplied with.’

The effect of yeasts also lives on after them – during the process known as autolysis, when wine is maturing on the lees, the remnants of the yeast release compounds into the wine that contribute to mouthfeel. So there is not much about the character of wine that isn’t influenced by yeast. One big divide in winemaking is whether to let fermentation happen naturally, by the indigenous yeasts in the winery, or whether to add cultured yeast to control the process.

Cultured yeasts are selected from natural yeast populations; sometimes they are used specifically to help to bring out the character of their region of origin, or to emphasise specific aromatic properties. Character is sometimes reinforced by cross breeding. (Although there have been research experiments with genetically modified (GM) yeast, almost none is available commercially; ‘GM yeast is completely ruled out by public opinion,’ says Dumont.)

‘I’m not trying to manipulate the wine, I just want the vineyard to show the best aspect it can,’ says Jeff Cohn at JC Cellars in California, explaining how he came to isolate the RP15 yeast (now a commercially available strain). ‘I had a vineyard at Rockpile for Syrah. I was doing bin fermentations and a few of the bins had a special flavour profile, so I isolated the yeast from those ferments. It brings a lot of minerality to the wine; it emphasises red fruits rather than black.’

Estimates for the use of cultured yeast in worldwide winemaking range from 70%-90%. Most often, the reason is probably simply to avoid the risks of spoilage that can occur with indigenous fermentation; sometimes the reasons are technical, such as using special yeast to ferment in high alcohol. The most striking examples of wine styles influenced by yeast come from aromatic varieties, where small changes in the concentrations of key components can greatly affect varietal character. The best-known example of a yeast with aromatic influence is strain 71B, which was selected for use with nouveau wines because it increases fermentation esters (usually esters evaporate before wine is consumed, but they are still present in nouveau wines that are drunk soon after bottling). Strain 71B increases formation of isoamyl acetate, which gives a strong impression of bananas. Critics said that for some years the consumers of Beaujolais Nouveau, especially in Japan, were under the mistaken impression that the natural aroma of Beaujolais was banana.

The gooseberry and passion fruit aromas of Sauvignon Blanc come from sulphur-containing compounds that are released during fermentation from non-odiferous precursors in the grape. Cultured yeasts vary widely in their effectiveness in freeing the odours, but winemaker Marcia Monahan at Matanzas Creek in Sonoma says that the grapevine clones and canopy management are more important in determining style.

‘Yeasts are in third place; they are important because the more enzymes they have, the more aromatics will be released, but the precursors have to be there.’ She selects yeasts to match the properties of the grapes from each block.

How commonly are yeasts used to increase aromatics? ‘Two-thirds of the wines here are made using aromatic yeasts,’ says one Sancerre producer. ‘People must be using aromatic yeasts – there are flavours that wouldn’t be there otherwise,’ says another, who uses a cultured yeast from Champagne that his grandfather introduced because of its neutrality.

Yeasts that increase the aromatic intensity of Gewürztraminer work by increasing the release of terpenes. Here there’s a novel alternative – a winemaker can buy preparations of the enzyme from those yeasts and add the powder to the must. Is this crossing the line of manipulation?

Petrol is one of the most striking aromas caused during fermentation of Riesling. Not everyone likes this. At the Rheinland-Pfalz research centre in Germany, Dr Ulrich Fischer is trying to develop a yeast that will make the less odiferous vitispirane instead. Is this changing varietal character?

The classic description of Meursault is nutty and buttery. Want your Chardonnay to taste more like Meursault? Use CY3079 yeast, which increases the impression of hazelnuts and brioche. According to the authorities in Burgundy, it ‘reinforces the aromas coming from the barrel and gives Chardonnay wines a rich hint which balances and melts wood tannins’.

Is using yeast to balance aromas and flavours a counterpart to choosing specific clones of a grape variety? ‘Very much so, especially in cases where there isn’t much heterogeneity in the vineyard block – using different yeasts is a way of building complexity,’ says Christopher Christensen at Bodkin Wines in California. ‘I may use one yeast for mouth-building properties and another for aromatics,’ he says, ‘and sometimes it pays to use multiple yeasts that compete with one another.’

Increasing alcohol in wine is a major concern worldwide. Since yeasts create the alcohol, can they help by making less of it? In principle, yeasts don’t have to convert all the sugar into alcohol – some could be diverted. But here’s the rub – the carbon atoms have to go somewhere. One recently developed yeast strain makes as much as 1.5% less alcohol: but it makes more glycerol and lots more ethyl acetate (nail polish remover). It’s not easy to find alternative targets to alcohol that don’t radically change the flavour and aroma spectrum of the wine. ‘That’s what yeasts do – create alcohol. If you change that, you change the whole story,’ says Charlotte Gourraud at yeast producer Laffort. Yeast is best for making adjustments to minor components rather than looking for major shifts. I would be surprised if a low-alcohol yeast could be found without a profound homogenising effect.

A potential homogenising effect on flavour is one major argument against using cultured yeasts. ‘The idea that cultured yeast will homogenise flavours is simplistic. It’s putting all the onus of flavour creation on the yeast as opposed to the grapes and the talent of the winemaker,’ says Dumont. ‘There are about 200 strains, which leaves good opportunities for biodiversity,’ says Charlotte Gourraud.

How far can yeast influence the flavour of wine? ‘You can tailor your product to reach your customer by identifying consumer preferences, the effect that a choice has on a customer, and its genetic composition,’ says researcher Linda Bisson at the University of California. ‘Once we’ve identified the flavour compounds, we can manipulate the taste. We derive flavours from the yeast, not the grapes.’

‘You can achieve almost any taste through these aromatic yeasts,’ agrees biodynamic guru Nicolas Joly, but as the most vociferous opponent of using cultured yeasts, he draws a different conclusion. His basic criticism is that ‘re-yeasting’, as he calls it, obliterates local character and vintage variation. ‘Re-yeasting is the consequence of a series of mistakes. It means you have destroyed your local yeasts,’ he says. Admitting that cultured yeasts can be used to make good wine (albeit lacking typicity of place and year), Nicolas believes that consumers should be informed. ‘Using yeast is okay as long as the consumer is not cheated. The label should say that cultured yeasts were used to give flavour.’

The alchemist tried to turn base metal into gold. Yeast does something more interesting: it turns grape juice into wine. The winemaker can use the alchemy of yeast to direct development of style, or can take the alternative view that natural variation from indigenous yeast is an essential part of wine’s character. There are no half measures here – if you use cultured yeast, you have to choose a specific strain(s), and even an attempt to be neutral (what is neutral, anyway?) is a choice. Using indigenous yeasts lets nature choose. The decision is one of the most crucial that influences wine style. 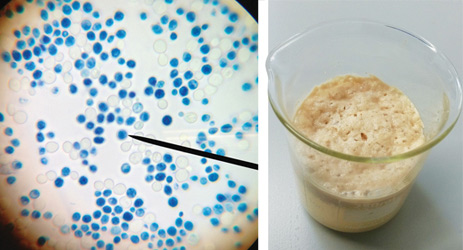