China's extreme weather poses the biggest threat to the country's ability to produce top wines, according to consultant Michel Rolland.

The Bordeaux-based consultant has spent the past three years working with Great Wall Wine Co, China's largest wine producer and a subsidiary of COFCO, to help it understand more about the winemaking potential at its vineyards.

His early conclusion is that weather variation poses the biggest challenge. ‘The weather is a crucial factor,’ he told Decanter.com during the recent Vinexpo Asia-Pacific trade fair in Hong Kong.

‘China will continue to make wine, the only question is at what level.’

Speaking about his three-year project with Great Wall, he added, ‘the first year it just rained. The second year was almost perfect and the third year has been somewhere in the middle.’

‘The Chinese climate is more difficult than Bordeaux,’ he said. Rolland is coming to the end of his three-year contract with Great Wall, but he expects the partnership to continue.

Professor Li Demei, DecanterChina.com columnist, said during a Chinese wine tasting at Vinexpo that China's vast landmass means it's important to ‘discuss the specific differences between each region’.

In the short-term, financial difficulties appear to be a bigger problem for some producers. As previously reported on DecanterChina.com, some vineyards were effectively abandoned last winter because growers did not see enough financial incentive in the sector.

Local governments have offered start-up funds to winemakers in the past few years, but Judy Chan, of Grace Vineyard, said at Vinexpo that some local authorities are now facing financial difficulties themselves.

Also at the trade fair, Christie's head of wine for China, Simon Tam, joined a growing chorus of wine professionals questioning the price of some Chinese wines.

Chinese winery Chateau Hansen last year released its Red Camel wine at €500 on the domestic market, but Tam said that even Chinese wines priced at the €50 mark look expensive for consumers. ‘I've no doubt there's some good wines, but they come at a hefty price tag,’ Tam said. 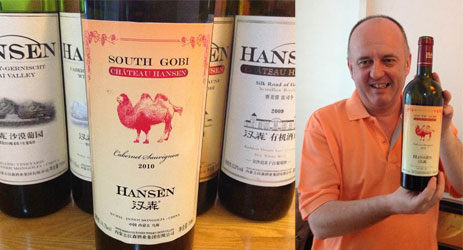