It’s 364 days since I last wrote about hail and its catastrophic vineyard consequences. It’s just 14 days since I described this year’s beautiful flowering weather and encouraging crop set in Burgundy. I’d hoped not to return to either topic soon.

Alas, the hail storms which struck Burgundy on June 28th have damaged no fewer than 5,000 ha in the region as a whole; once again, unlucky Pommard and Volnay have been worst hit. Damage is already estimated at 75 million euros (hail costs French agriculture as a whole more than half a billion euros a year). Is hail the most tangible negative effect of climate change, at least in France’s fine-wine vineyards? And if so, can we do anything about it?

Let’s begin at the beginning: with cumulonimbus storm clouds. These are clouds characterised by colossal height: they are often tall enough to reach the top of the troposphere (the lowest level of the earth’s atmosphere, and the place where weather happens). A large cloud of this sort can be more than twice as high as Mount Everest. Because of its size, it contains enormous energy, and that energy is in motion: a violent internal churn of warm, moist updrafts and cooler downdrafts.

Hail is most common in mid-latitude continental locations such as Burgundy, and in summertime. Why? The land heats up forcefully (the middle part of a warm, cloudless summer day will often be hotter in Burgundy than in Languedoc) creating warm, moist, unstable air: cloud fuel. At this latitude, though, the point of the main updraft inside the cloud where the temperature drops below 0˚C lies at a relatively low altitude of 3,500 metres or so.

Yes, there are many more cumulonimbus clouds in tropical locations than in temperate latitudes, but their freezing level lies significantly higher in the cloud, meaning that less hail is formed, and that which is formed is less likely to make it down to ground level without melting.

All clouds are constituted by water vapour, and as the fine vapour particles rise and cool, they condense around nuclei (such as dust particles or pollen) to form droplets. Since cumulonimbus clouds are very tall and very energetic, this process continues over a huge range of heights and temperatures. In their white-knuckle ride towards the top of the troposphere, the droplets become ice pellets. Interestingly, this may happen far below 0˚C since, without further nucleation, water will remain liquid in supercooled form down to -48.3˚C. But the drops will usually collide with more nuclei (including existing ice crystals) and form hailstones.

It was once thought that the biggest hailstones had been churned repeatedly up and down inside the cloud, but meteorologists now suspect that they are simply the pellets which have moved upwards most slowly, away from the core of the cloud, and have had therefore most chance to grow, especially if they have had extensive contact with supercooled water droplets. The downdrafts (and the weight of the icy mass of the hailstone) then take them earthwards. Assuming that the freezing level inside the cloud is low enough and the pellets had grown large enough inside the cloud, they will come clattering down onto hapless vines as hail. Otherwise, they will melt and it will just rain heavily, as in the tropics.

Nothing in climate-change science is simple or straightforward, but in our warming world, ocean temperatures, sea surface temperatures and land temperatures are all rising, meaning that there is more storm fuel in the atmosphere than in the past. Hail-risk areas (those where the freezing level inside the cloud is low enough) are therefore more vulnerable than they have ever been. The Côte de Beaune’s experience over the last three years would seem to confirm that, though any climate scientist would point out that this is far too short a period in which to discern a trend, and should be assigned pending longer-term data to temporary bad luck.

The principle behind seeding against hail is to increase significantly the population of nuclei in the cloud, and thereby decrease significantly the size of the hailstones, making them more likely to melt on the way down or fall harmlessly. As it happened, 34 of these generators were installed in Burgundy at the beginning of June, and they were used in this case. A failure? It would seem so. And yet you can’t measure the effectiveness of anti-hail techniques: it’s an experiment for which no control is possible. The hailstones which fell at the end of June 2014 were smaller than those which had fallen the previous year. Perhaps they would have been even bigger without the silver iodide.

The success of cannons is harder still to quantify. The shock wave is said to travel though the cloud, disrupting hail-formation and making the pellets fall as slush or rain. (In times past, church bells were rung as hail clouds approached: maybe the same principle was at work.)

I visited Château d’Issan in Margaux a little earlier this spring, and saw that a hail cannon had been installed there. Manager Clarisse Branche told me that the property had lost half its crop to hail in both 2008 and 2009: fruit worth in total about 2 million euros. The cannon cost just €150,000. They’d used it about 10 times a year since then (it detonates every seven seconds until the threat is over), and had no further significant losses. That could, though, simply be luck.

The one measure which unquestionably works is often now used in hail-prone Mendoza: netting. It’s a big investment, though, and for nets to be effective they have to be fine-meshed, blocking out between 10 and 30 per cent of the sunlight. You can live with that in Mendoza, which averages 2,872 hours of sunlight a year, but it’s a different matter in Burgundy (Savigny enjoyed just 1,618 sunshine hours in 2013). Perhaps nets which magnify rather than block sunlight are the answer. But would INAO allow them? 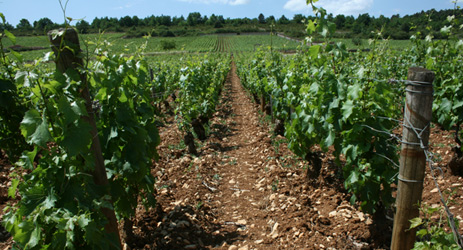 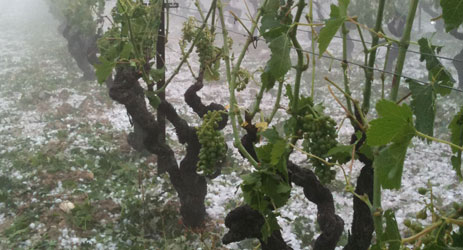