China’s young boutique wineries have begun demonstrating the potential to produce wines of international quality, but they need to find and refine their own identity, Steven Spurrier and sommelier Guo Ying said at a tasting of award winning Chinese wines at the Decanter Shanghai Fine Wine Encounter.

The first wine tasted at the seminar, Skyline of Gobi Reserve Chardonnay 2013, was made in Yanqi Basin of Xinjiang.

The young Tiansai winery was established in 2010. Like many young boutique wineries newly established in China, the winery has adopted some of the most advanced equipment and winemaking techniques.

However, the scarce rainfall, cold winter and the consequential higher cost on irrigation and vine burying are among the many challenges faced by wineries in this region, said Guo Ying, senior sommelier of Four Seasons Hotel China and judge of Decanter Asia Wine Awards (DAWA).

Ripe fruit combined with well-integrated oak were the key features of the other wine from Xinjiang—the 2013 vintage Shiraz-Cabernet blend from Zhongfei winery, said Spurrier.

Guo Ying said all Chinese wineries need to bear in mind that use of oak, the choice of grape variety and winemaking equipment should be based on the local climate and soil, rather than the international norm.

‘Finding a unique identity’ has become a new task for Chinese quality winemakers, she told the audience at the Ritz-Carlton in Pudong. 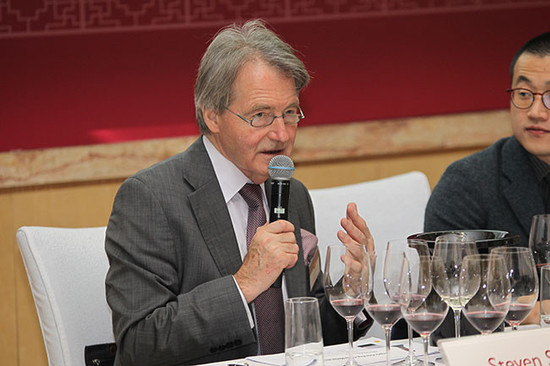 ‘New oak is going out of fashion’

Backing up her words, Spurrier praised the great blackcurrant fruit of the Envoy Merlot 2013 from Ningxia Xixia King, but he said the wine could be more subtle if the presence of new French oak were not ‘too dominant’.

‘New oak is going out of fashion in Europe, and I don’t think it should come into fashion here,’ said Spurrier. ‘There’s no reason for vineyards in this country to try to copy what’s going on in Burgundy, Australia and the rest of the world.’

The other three wines from Ningxia: Cabernet Gernischt 2013 of Château Yuhuang; Cabernet Sauvignon-Merlot 2012 of Legacy Peak; and regional trophy winning Pretty Pony 2013 of Kanaan Winery, each showed their own unique characteristics and a ‘sense of place,’ said Spurrier.

Ningxia’s strong development in recent years was mainly ‘thanks to the strong support of the government’, said Guo Ying, because viticulture provided a possible answer to water scarcity and non-arable land in this region.

Compared to Ningxia, Shandong and Xinjiang, Yunnan as a wine region is lesser-known due to its limited production from vineyards ‘scattered around the province’, said Guo Ying.

However, the warm winter of the southerly region means that wine growers don’t need to bury the vines in winter, which could save as high one third of the production cost.

To demonstrate the region’s character, a Cabernet Sauvignon-Merlot of the Shangri-La winery was chosen for the tasting. The wine presents more of a ‘new world style’ than some of the previous wines due to its vigour, strength and character, said Spurrier. 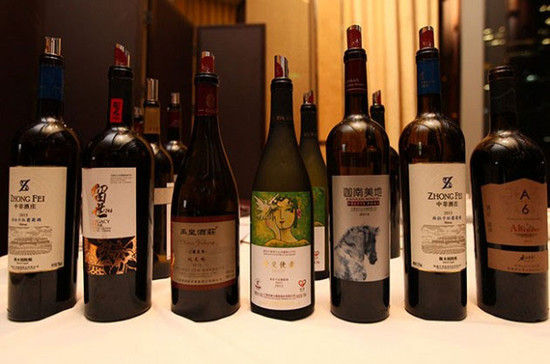 The seminar ended with a heated discussion on the possibilities for organic viticulture in Ningxia.

Marcus Ford, of Pudao Wines, also contributed to the discussion, saying that ‘they (local producers) need to be making the best possible wines in the conditions they have’.

However, added Guo Ying, from the point of view of a sommelier, organic and more ‘health-driven’ product is 'definitely what consumers are looking for at the moment'.