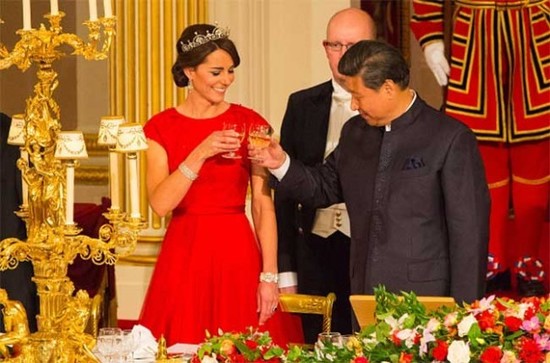 The Chinese president and his entourage were treated to Ridgeview Grosvenor 2009 Brut English sparkling wine as part of the event.

Other wines chosen from the government’s £3m hospitality cellar included a Chateau Haut-Brion 1989, a regular fixture at fine wine auctions and a lauded Bordeaux vintage for several chateaux, according to a source with knowledge of the event.

Guests also drank Warre’s vintage Port from 1977, one of the most highly rated years in the Douro, plus a Mersault Premier Cru Santenots 2007 from Domaine Marquis d’Angerville in Burgundy and Klein Constantia Vin de Constance 2008 from South Africa.

Officials in the UK government’s cellar rate occasions as either A, B or C in order to help decide the wines that are chosen for dinners and functions.

With the pomp and ceremony surrounding Xi Jinping’s visit, it was clear that the Chinese president has made the top tier. The UK government said his presence will ‘unlock’ £30bn in commercial deals.

A dinner menu from Buckingham Palace, published by the Guardian on its live blog last night, included a loin of venison from the Queen’s Balmoral estate in Scotland, served in a Madeira and truffle sauce. To start, guests ate filet of west coast turbot with lobster mousse.

There was a ‘delice’ of dark chocolate, mango and lime for dessert.