A vertical spanning four decades of any great estate is always going to be a fascinating exercise. The changes reflected in a wine over such a long period of time is a lesson not just in history, and the influence of the managers, consultants and owners who take the big decisions, but also in the wider influence of economic changes that can batter any business over the long-term, not to mention global weather patterns and technological advances, both of which play their part in translating what happens in the vineyard into what we can discern in our glass.

All of these influences are even more striking in the case of Chateau Lagrange, one of the largest estates in Saint Julien with almost 390 acres of land. Under the ownership of the Suntory Group since 1983 this place has been stripped down, remade, and built back to glory piece by painstaking piece. If you want to understand the sheer hard work, guts and bloody-mindedness that it takes to return miles upon miles of vines to a state worthy of a Bordeaux 1855 classified wine, you can do a lot worse than get to know this northern Médoc Third Growth.

Thirty years ago, when Suntory – itself an historic name dating back to 1899, but better known for beer and saké than fine wine – decided to invest in the Médoc, Lagrange had been neglected for decades. Most of its classified neighbours had also suffered heavily in the post-war decades, but Lagrange was lagging behind the investments that were slowly returning to Bordeaux cellars in the 1970s. The Cendoya family had shown more interest in the forest than the vines on their land, and sold off large chunks of vineyards (to Ducru-Beaucaillou among others), and let the quality of the remaining vines suffer. A fire destroyed much of the chateau (and its collection of older wines) in the 1950s, after which investment dropped even further. From being one of the largest and most impressive properties in 1855, Lagrange had shrunk to 138 acres of vines, and had a full 50% of Merlot vines; an unusually high proportion for the appellation that was making itself felt in light, underpowered bottles.

Suntory made plain right from the start that it was serious, investing three times the purchase price within two years of taking possession. They appointed director Marcel Ducasse, who ran the estate from 1983 to 2007, and in just two years, the overall size of the vineyard was doubled, with 150 more acres planted by 1986. And the percentage of Cabernet Sauvignon was sharply increased (today it stands at 66%, with 7% Petit Verdot to add further spice and backbone, and just 27% Merlot). A second wine, Les Fiefs de Lagrange, began with the 1983 vintage, ensuring that those young vines would have somewhere to go while they gained in age and complexity, and to give the first wine a chance to catch its breath.

At the retrospective held at the chateau this week, some of the issues that Lagrange has had to overcome were obvious. The older wines had huge bottle variation – almost every vintage we tasted had to be tried twice, with replacement bottles luckily showing more satisfactorily. Great at the estate, but less comforting if you are trying these at home. Until 1996, problems with corks were rife in the Médoc, so even famously long-living wines such as Lagrange could age prematurely. Before 2002, there were occasional problems with filtration, resulting in a wine that could be unstable or degrade in the bottle. The success of this wine today comes because the team was not afraid to confront these issues, and to deal with them.

But one of the most instructive things about a vertical is seeing not simply which wines are the best (in terms of the having the most potential; so for this part of the Médoc that would mean weight of tannins, ripeness of fruit, clear Cabernet Sauvignon markers, notes of spice and menthol) but weighing up which are best to drink now, which best to cellar, which are doing better or worse than expected. Verticals give us a chance to converse with an estate, to look beyond the easy wins, the shortcuts to headline vintages and instead seek out the wallflowers, the ones that will take your breath away if you open them today instead of in five years’ time after perfect cellaring. 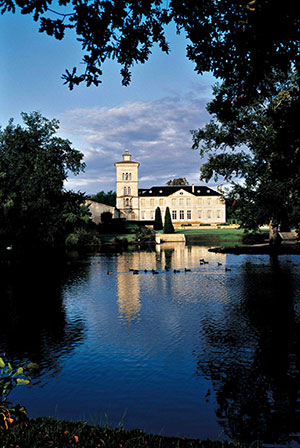 Of the vertical that I tasted, from 1985 to 2013, there were many excellent vintages, and some disappointing ones. But the tasting notes refer to wines that are ready to drink, and that if you have in your cellar, or can find to buy, would be highly rewarding.

Showing those firm purple colours of a middle-aged Médoc. A slight touch of animal on the nose (less good filtration than today, will have developed in the bottle), but underneath this, there is lovely, rich fruit, this is a warm, rich, exotic fruit spectrum, prunes and summer plums, clearly ripe fruits, harvested at the right moment. The weather was so hot during harvest that student pickers wore bathing suits apparently! There is a tough masculine edge of steel becoming apparent in this wine now, feels ready to drink, but demands something from you, the tannins are insistent. This is ready to drink, but offering plenty of future potential. 44% Cabernet Sauvignon, 44% Merlot, 12% Petit Verdot.
93 Highly Recommended.

Nose is fairly reserved when you compare it with other St Juliens of this vintage such as Gruaud Larose. Real beauty on the palate though, this is delicate, get wild blackberry, delicate mid palate that raises its game, get some mouthwatering tannins and pH levels that really pull you very lightly towards the finish line. This feels like deft winemaking, getting a real Saint Julien elegance. 44% Cabernet Sauvignon, 43% Merlot, 13% Petit Verdot. Dry and sunny during harvest. 94 Highly recommended.

Colour taking on depth and power. Very different on the nose here, get a more toasted, clove, coffee burnt oak nose, although still the usual 50-60% new oak used, this is but just vintage effect with warmer weather. Lovely coffee hints, an exuberant fin de siècle feel here ironically. Fruit is warm, texture silky but also firm, feel you can get your hands around this, although alcohol a little high. All very enjoyable, not quite ready to drink yet, give it another five years I would say, or get the decanter out. 76% Cabernet Sauvignon, 24% Merlot. 93 Highly recommended.

Power, clean, heavy in fruit, utterly excellent, right at the beginning of its drinking promise, maybe not quite in the window yet, but a shadow of it. Aromatic impact is immediate, caressing fruits. Feel more slick coffee chocolate from the oak, a touch too much impact from the alcohol clear heat, but brought back into line by the tannins at the close of play. Monumental, great achievement. 46% Cabernet Sauvignon, 45% Merlot, 9% Petit Verdot. 95 Outstanding.