It's hovering around freezing in the forest, but without the snow that has been falling in Paris and much of northern France this week. The small crowd of winemakers stamp their feet, digging in their pockets for gloves.

We are in the Forêt de Boulogne, a state-owned forest just outside of Blois, and at the heart of a vast area of woodland where the three 'haute futaie’ forests of Boulogne, Russy and Blois are found; the source of adult trees of over 120 years which are essential for barrel-making oak.

All of the assembled winemakers, from Burgundy, the Languedoc, Bordeaux, Aldo Aldige and Puglia, use barrels in their production; something that is more unusual than you might think. The wine industry makes a lot of noise about oak, and the smoky, vanilla pod, caramel and coffee complexities that it can bring, but only 2-3% of wines globally are actually aged in oak barrels. Those using 'alternative products' - chips, powder, staves, maybe a touch of vanilla essence here and there - might bring that figure up to 25% of wines that have an 'oak character'.

But it's only the high-end producers who go to the trouble and expense - in terms of cleaning, repairing, handling and storing, never mind the initial outlay of between €600 and €1000 per unit – of actual barrels. For estates that use them, barrels have become the second biggest outgoing after staff salaries. The estimated cost added to producing a litre of wine raised in French oak is between €1 and €1.50, compared to €0.05 to €0.10 for oak chips, so the appeal of the alternative products is clear, even if the results are less subtle, and less long-lasting.

The French are the world's largest producer of barrels, with 42 cooperages across the country making 500,000 barrels per year. France is also the number one consumer, taking one-third of output, with two-thirds heading out to other producer countries, which still regard French oak as the most prestigious in the world. The United States takes a full 37%, with China, inevitably, consuming more and more each year, buying around the same amount in 2012 as Spain, so 50,000 barrels (although Seguin Moreau, who is responsible for the forest visit and is the leading supplier of French oak in China, says two-thirds of its barrel supply in the country went to one client in 2011).

These are difficult times for the industry, with a squeeze on supply, and unstable pricing from the general economic crisis, a stagnating French market, pressure from alternative products, and the natural limits of French forests. At the same time, fashion has swung against heavily-oaked wines, where overly-enthusiastic vanillin flavours can mask typicity of grapes and regions.

It’s hard to ignore the romanticism of the process however. ‘There seems something inevitable about the marriage of vine and oak,’ says Jean-Philippe Masclef, oenologist at Chateau Haut-Brion, one of the few Bordeaux estates with an on-site cooperage. ‘Both plants have similar structures; part wood, part leaves, part fruit. They are equal partners in wine, and the cooper and oenologist have to work closely together.’

These forests are protected natural resources, and have been controlled by the government since 1669, under the direction of Louis XIV’s finance minister Jean-Baptiste Colbert, enlisted to ensure the country would have a steady supply of oak for ship building. The first regular felling of trees began in 1832 in the forest of Troncais. Today the forests are run by the Office National des Forêts (ONF), and oaks are sold at auctions twice a year – where coopers (often through an intermediary known as a stave maker) will buy the rights to log specific parcels of forest, with up to 18 months to fell trees after the auction.

The trees felled in France are most typically between 180 and 200 years old, with each yielding on average two barrels (enough for 600 bottles of wine). Auctions will see competition between furniture makers (although fewer and fewer want the highest grade oak) and staves makers. ‘It’s practically impossible to know what imperfections and defects might lie within the trunks,’ says Philippe Quintard, the oak purchasing director for Seguin Moreau. ‘There are always nasty surprises, and there is considerable financial risk in estimating and purchasing the timber. But you look for defects on the trunk that are visible, and look to see how many complete staves you are likely to be able to make.’

Every few years, a particularly old or historic tree will come up for auction. This last happened in 2011, when stave maker Bertrand Robert placed the successful bid of €37,790 for Chene Vieux Morat, one of the oldest ‘sessile’ oaks in the Tronçais forest. This tree was 350 years old and had lived through six kings, two empires and five republics, but had eventually been weakened by the storms of 1999, then the heatwave of 2003, and was reaching the end of its life.

Robert sold the tree on to Bordeaux cooper Luc Sylvain, and the resulting barrels were bought by various Bordeaux chateaux, including Chateau Lalaudey in Moulis-Médoc, who will bottle a special cuvée of 73 double magnums of its 2009 vintage, called ‘Cuvée Chene de Morat’.

In the plot where we are standing, there are perhaps a dozen oaks, four or five marked with a large red cross that indicates trees ready for felling. Touching any others is a criminal offence, as the ONF has a carefully worked out system for ensuring renewability. A logger deftly drives an electric saw into the trunk of one, letting fresh wood shavings spiral on to the ground. A pungent vanilla aroma fills the air, heady in the crisp clean morning. Research into these aromas, and the individual molecules in oak that contribute to not only flavour but texture, mouthfeel and sweetness are ongoing, and have many winemakers excited.

‘Oak barrels for ageing wine seem a fitting destination for the quality and fine grain of an historic tree such as Vieux Morat,’ said Bertrand Robert when he sold the tree to Sylvain. It certainly ensures its continued contribution to French culture, at least for a little while. A barrel normally serves a wine estate for three to five years, and the oak is then once again looking for a new home. What happens afterwards is less certain – one Saint Emilion classified estate reportedly sells its used barrels at high prices to wealthy Japanese wine lovers, who turn them into parquet floors… 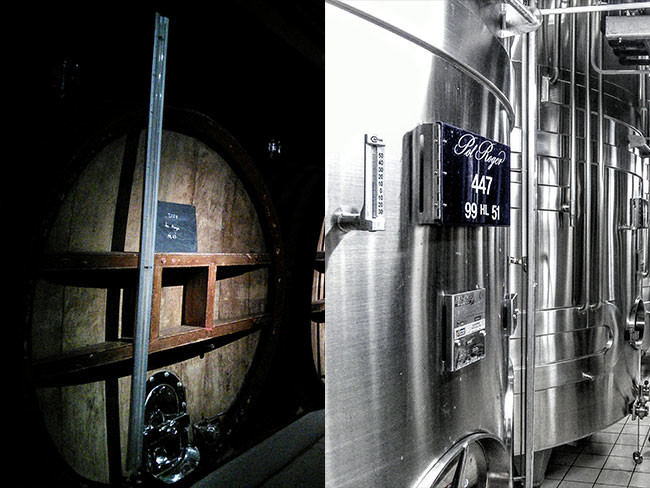 A debate from Champagne’s sensual parliament