Oranges are a species of citrus fruit which branch into many varieties, whether it be your lunchbox satsuma or a red-fleshed blood orange.

Despite its many forms, all orange varieties share a similar citrus character that’s less acidic than lemon, lime or grapefruit and more fresh, fruity or tangy instead.

The same chemical molecule is behind the aroma of lemons and oranges, known as limonene. But it exists in two slightly altered forms and interacts with our nasal receptors differently, resulting in the two distinctive fruit scents.

Wine tasting notes might be more specific by naming which part of the orange fruit correctly describes the flavour or aroma found in a wine.

For example, a wine could have notes or orange peel or zest, which indicates a more pungent orange aroma, because limonene is concentrated in essential oils given off by glands in the rind.

This means that when you peel or grate the skin of an orange you release a stronger and more bitter odour than that of its flesh.

These can include Fiano wines from Campania in southern Italy, Riesling from Australia’s Clare Valley, or Californian Chardonnays — where orange zest notes might be intermingled with tropical fruit flavours.

Do not confuse orange descriptors in wine tasting notes with orange wines, which are made using white wine grapes which are macerated in their skins, giving them an amber hue. In this case term ‘orange’ is in reference to their colour and does not prescribe orangey flavours or aromas.

Charcoal is a material made up of residual carbon and ash, left behind after other constituents of vegetable or animal matter have been removed after slowly being heated in an environment without oxygen.

You may have experienced its flavour and aroma in chargrilled food that’s been cooked using heated pieces of wood charcoal.

Charcoal’s flavour profile is often described as smoky, woody and slightly acrid in taste, which can be delicious if combined with the right food, such as meat or fleshy vegetables.

In a similar way, wines which display flavours reminiscent of charcoal can be palatable if these notes are counterbalanced correctly. Many Syrah / Shiraz wines are notorious for their smoky charcoal elements, often integrated with black fruit, spicy or peppery notes.

Charcoal and other smoky flavours can be created by oak-ageing and their intensity usually depends on how much the barrel was toasted, as well as the pungency of other flavours present.

You can look for these oak-charcoal influences in tannic reds such as Barolo wines, alongside earthy notes like truffle and tar. Or in classic Bordeaux blends, where charcoal might meld with heavy cassis or liquorice notes.

Activated charcoal can be directly used in winemaking. It’s sometimes used as a fining agent to filter undesirable elements from the wine, or to lighten the colour of some white wines. However, these processes are not connected to the oaky charcoal flavours outlined in tasting notes.

When it comes to alcohol, almond is perhaps most associated with Amaretto; the Italian liqueur whose name translates to ‘little bitter’. Almond’s signature bitterness is thought to be caused by benzaldehyde, which is a chemical compound formed in wines during fermentation and also carbonic maceration – when grapes are sealed in a vessel filled with carbon dioxide prior to regular fermentation.

As well as fermentation, it can also come from yeast influences, in a similar vein to biscuit and brioche notes. This could include wines rested sur lie, ‘on the lees’, or those that have undergone bâtonnage, also known as ‘lees-stirring’

Levels of benzaldehyde are generally higher in sparkling wines, particularly those made using the traditional or charmat methods.

In the wine lexicon, almond falls into the ‘kernels’ category, alongside coffee, chocolate and coconut. In Decanter’s How to read wine tasting notes, experts use almond to describe a certain ‘fruity bitterness, more refreshing than unpleasant’. It is, for example, present in the dry red wine Allegrini, Valpolicella Classico Superiore 1998.

This fruity bitterness can also feature in some young red Bordeaux wines, such as Château d’Issan, Blason d’Issan, Margaux Bordeaux, 2016 and Château Prieuré-Lichine, Margaux, 4ème Cru Classé 2016. Here, it has developed the smoky and toasted element of ‘grilled almonds’.

Asparagus as a tasting note in wine can be divisive; some love the savoury complexity it brings, while others recoil from what can seem a funky vegetal tang. It’s commonly found in descriptions of grassy white wines such as young unoaked Sauvignon Blancs, particularly those from New Zealand’s regions like Marlborough or Awatere Valley. Here it’s often accompanied by typical Sauvignon Blanc notes like green apple, gooseberry, pea or blackcurrant leaf (that’s code for cat’s urine).

Other unoaked whites which might have notes of asparagus include Albariño wines from Spain’s Rías Baixas region, such as Laureatus, Val do Salnés 2014. It’s also in the more unusual Vale da Capucha, Fossil, Lisboa 2012 made with a blend of local Portuguese grape varieties.

Asparagus is related to descriptors like vegetal or herbaceous, as well as more specific flavours of fennel or green bell pepper. All convey a sense of savoury bitterness that, in well-made wines, is saved from acridity by a freshness that’s almost sweet.

Scientifically, the distinctive scent of asparagus is generally attributed to odour compounds called pyrazines, which are also a cause of grassy and green bell pepper flavours and aromas. Asparagus is said to be evoked by 3-isopropyl-2-methoxypyrazine, to be precise.

Look out for distinctions within the asparagus category. For example, imagine snapping a lightly steamed asparagus stem, and the fresh, clean aromas that curl up your nose from the vapour.

Compare this to stewed or off-flavours coming from canned asparagus, which can be caused by mercaptans, aka sulphur compounds (see ‘Rubber’ below). There’s also white asparagus, which is usually considered to taste milder and more delicate than its chlorophyll-driven green cousin. All versions can add their own nuances, which can make for an all-round more interesting and appealing wine if counter-balanced correctly. 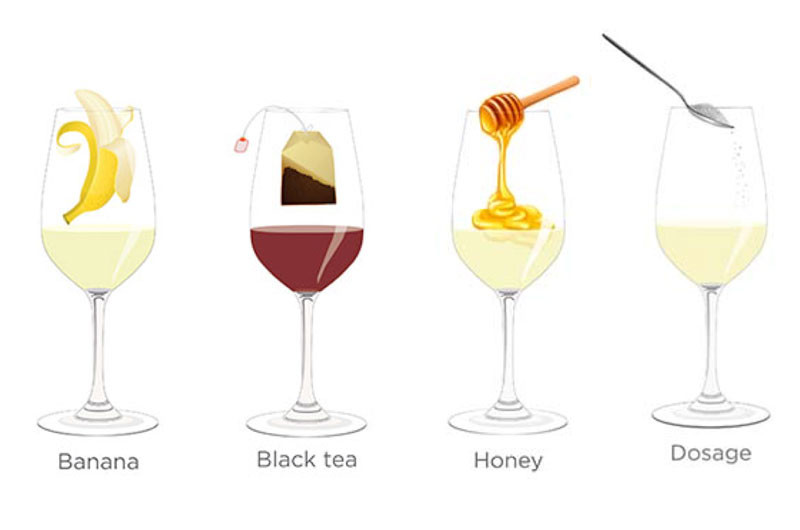