One of the more challenging tasting notes, wet wool describes the aroma of damp and earthy smelling fleece, close to that of lanolin — the fatty substance secreted by sheep’s skin.

In tasting terms, it belongs to the mineral flavour category, joining other peculiar yet precise notes like rubber, barnyard and sweaty saddle. Perhaps the best way to understand wet wool is to experience it first hand by getting hold of a tub of lanolin cream, which is used for cosmetic purposes to moisturise skin. Or you can wear your woolly jumper in the rain, then leave it in a heap to go damp and pungent.

Depending on the wine, wet wool aromas can either be an intentional mark of style, or indicative of a fault. For example, it’s typically encountered in Chenin Blanc wines and can be considered an enjoyable part of their aroma profile.

As a fault, wet wool aromas could be a sign of light strike, aka goût de lumière, resulting from excessive exposure to sun light. Transparent bottles might be attractive to the eye, but they can leave the wine more vulnerable to light strike, which is why green or UV resistant bottles are seen as safer by many producers.

It’s often hard to define a single position for plum in the tasting note lexicon, because it can appear to span stone fruit, red fruit and black fruit categories, depending on the variety and its level of freshness and ripeness.

It is commonly associated with Merlot wines, particularly in their younger years, and may denote a fleshy character to the wine. You will often find plum in tasting notes for fruit-driven varietal wines dominated by black fruits, including Cabernet Sauvignon — but not exclusively.

Sometimes tasting notes might specify ‘black plum’ or ‘dark plum’, denoting richer and sweeter flavours, as might be seen red wines from Douro, made with Portuguese varieties like Touriga Nacional and Touriga Franca.

You can find plum flavours and aromas in other varieties, too, such as Syrah and Grenache blends, like Domaine de la Cadenette, Costières de Nîmes, Rhône 2015 and La Cabane Reserve, Grenache & Syrah, Pays d’Oc 2015.

In Barbera and also some Nebbiolo wines from Piedmont, ripe red plum notes can be intensified by influences of sour cherry.

You may also come across ‘plum jam’ in tasting notes, referring to plums which have been heated with added sugar, creating more intensely sweet, complex flavours.

Cherries have a distinctive fruit character, often replicated artificially for confectionery and liqueurs. When it comes to wine tasting notes, it’s important to distinguish between different cherry forms and flavours. For starters, there are both sweet and sour cherries — think of the difference between maraschino and morello cherries.

Red cherries are seen as part of the red fruit flavour profile, and black cherries are included in the black fruit category. In both of these, cherries might be seen as not so sweet or tart as the berries, yet more concentrated than fleshy plums, for example.

In Decanter’s How to read wine tasting notes, the general character of cherry is defined as, ‘firm, vibrant fruit with a touch of acidity and none of the sweetness of, say, blackcurrants’.

Wines that can carry notes of tart cherries include northern Italian reds, such Piedmont’s Barolo and Barbaresco wines made from the Nebbiolo grape. Red cherry notes can be found in some Tuscan Sangiovese wines from Brunello di Montalcino and Chianti.

Young Pinot Noir wines can encompass a range of cherry flavours from red to black, particularly those of New Zealand, where some of the best examples combine cherry with hints of jam or strawberry to offset earthy notes.

Perhaps the wine most associated with cherries is Beaujolais, a red wine made from the Gamay grape. Cherry notes in these wines are usually the product of carbonic maceration, a process in which whole grapes are sealed in a vessel filled with carbon dioxide prior to regular fermentation. This helps to preserve the naturally juicy and fruity character of Gamay.

Although there are many different types of melon – watermelon, canteloupes, crenshaw, hami to name a few – when talking about melon flavours in wine, we’re generally talking about those associated with the honeydew melon.

Do not confuse this with the French grape that makes Muscadet wines, Melon de Bourgogne, which actually has very little to do with melon fruit.

In the wine tasting lexicon, Melon is found among other tropical fruits like pineapple, lychee and mango. The flavour profile of ripe melon is generally fruity, refreshing and sweet, although its sugar content is not normally as high as that of pineapple.

Rosé wines can be a good place to look for melon flavours and aromas.

This is particularly true for wines from Provence, like Domaine Gavoty 2013, as well as some ‘provençal-style’ Californian rosés, such as Picayune Cellars, Rosé, Mendocino County 2016 or Arnot-Roberts, Clear Lake Rosé, Lake County 2016.

Melon can also be evoked by rosé Champagnes, made from varying ratios of Pinot Noir, Pinot Meunier and Chardonnay. Including De Castelnau, Rosé Champagne NV, where fruity melon is balanced by floral beeswax notes.

Elsewhere, you might also find melon notes in full-bodied white wines from warm climates, such as Chardonnay from Californian regions like Napa Valley and Sonoma County. As well as in some Italian white wines like premium Pinot Grigio, or fruit-forward Prosecco wines. 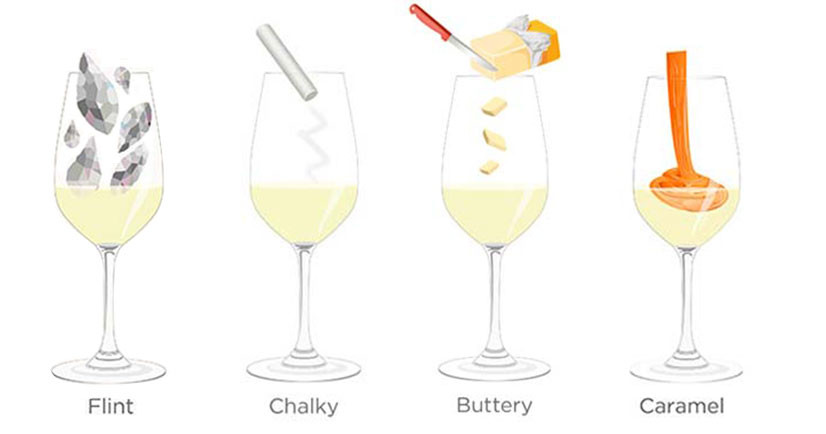