Search this site (start typing)
By Andrew Jefford
8 May 2014

‘If great red wine is going to come out of anywhere in China, it will come from Ningxia’
David Henderson, Dragon’s Hollow

*Originally published in the April Issue of Decanter magazine.

You may not have tasted a Chinese wine yet, but when you do, it’s likely to have come from Ningxia. Andrew Jefford visits a region full of potential.

Usagi (which means ‘rabbit’ in Japanese) was heading for Hong Kong. The typhoon was due to make landfall on 22 September, the day I was to fly to Beijing; ships had been gathering in the harbour for days. Fortunately, my flight was in the morning; the airport closed that afternoon. I watched the first squalls of rain flay the tarmac, then turned to survey the lounge. There was Michel Rolland, quietly reading.

The world’s leading winemaking consultant was unlikely, I reasoned, to be on holiday; I felt duty-bound to pester him. ‘The challenge,’ he replied affably enough, to my question about his impressions of China, ‘is the climate. It’s either very cold, very hot, or it rains a lot. You don’t get the moderateness which you get in Europe.’ He was, as I suspected, on a consulting mission – to COFCO, the biggest agricultural enterprise in China, where he works on three prestige red-wine projects for which he is given carte blanche. The biggest problem he faced? ‘Thinness of flavour,’ he said. ‘It’s very different from California and South America.’ We chatted about the freezing winters and the pre-harvest rains, which were sometimes catastrophic in 2012. Anything else? ‘All the wines I am working on are 100% Chinese,’ he said before we parted, ‘but many “Chinese wines” aren’t. China is one of the biggest importers of bulk wine in the world.’ He chuckled. ‘I think blending is a profession with a future here. I wish I was younger.’

There are something like 12 main wine regions (based on provincial or administrative divisions) in China, and about 665,000 hectares of vineyard in the country, though most are for table-grape production; winegrape vineyards were estimated at 29,545ha in 2010. To generalise grossly, the nearer you get to the east coast, the higher the likelihood of summer rain; the further you go inland, the more severe the winter cold.

The biggest winegrape-producing region at present, though one with few wineries, is Xinjiang, far inland and closer to Kyrgyzstan than it is to Beijing. There is also much excitement about the quality potential of China’s deep southern highlands, in the Yunnan and southwest Sichuan provinces; that is where LVMH has chosen to site its high-quality red-wine facility. Extreme high altitude (up to 3,000m) compensates for low latitude there, with no problems of summer rain or deep winter chill; the remoteness of this zone near the Myanmar border, however, poses many logistical challenges, and there isn’t much suitable land available.

(For more on Chinese wine regions, see articles by Li Demei, a prominent Chinese wine consultant and a columnist on DecanterChina.com: part 1 and part 2) 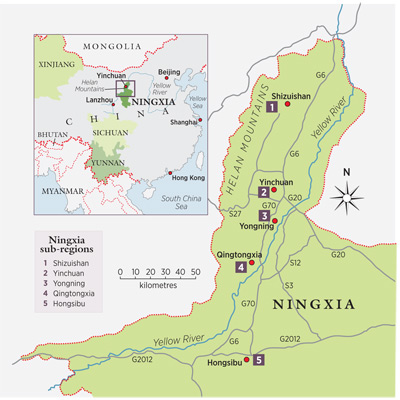 Towards the ‘million mu’

Ningxia is the region which has established perhaps the best quality reputation so far in China; it’s also where local government has pushed hardest to develop viticulture, and political involvement of this sort is hugely significant in China. It plans to have a ‘million mu’ planted by 2020 (a mu is a traditional Chinese land measurement, equivalent to one-fifteenth of a hectare), meaning about 66,700ha – bigger plantings, in other words, than in the whole of Austria or New Zealand. There are already said to be 30,000ha in place, predominantly planted (as always in China) with red varieties, chiefly Cabernet Gernischt (Carmenere), Cabernet Sauvignon and Merlot. Many observers, though, consider the million mu target over-ambitious; ground water supplies are in crisis in Ningxia following years of over-extraction, and supplies from the Yellow River are compromised by pollution, too. I asked a Chinese friend what resonances ‘Ningxia’ had to the average Chinese living elsewhere. ‘Muslims and lamb,’ was her immediate reply. The traditional population of this small morsel of the southern Gobi desert are the Hui, one of China’s Muslim minorities, though there appears to be no conflict between religion and wine production here; in any case, 62% of the present-day population of Ningxia are Han Chinese. And lamb? Good with red wine, of course.

The vineyards are sited at various points north to south along the Helan mountain chain, in an austere, sparsely vegetated landscape. From north to south, the main sub-regions are Shizuishan, Yinchuan, Yongning (the area with the biggest plantings and the best-known wineries), Qingtongxia and Hongsipu. Although the vineyards lie at the foot of the Helan mountains, they are still high, lying at 1,200m. Soils are generally sandy, sometimes with clay and pebbles, with variable organic content (from very low to very high), and high pH – an analysis of 17 sites found only two soils samples with a pH lower than nine. Irrigation is essential: annual rainfall is about 200mm.

Remind you of anywhere? Argentina’s Mendoza would be the obvious point of comparison – which was why I was so interested in the views of Argentinian viticulturist Edy del Populo of Dominio del Plata, who visited Ningxia shortly before Anthony Rose and I were there. Ningxia and its main city Yinchuan don’t have the grandeur of Mendoza’s Andean backdrop, but in other respects the two landscapes, desolate and arid, have much in common.

If you taste Ningxia’s red wines, though, you’ll find them very different to those of Mendoza. ‘Light, soft, not so concentrated, good acidity, herbaceous,’ were the adjectives chosen by leading Chinese winemaking consultant (and DecanterChina.com columnist) Li Demei, when I asked him to describe ‘the Ningxia style’, and I’d agree with all of them.

I assumed, therefore, that Ningxia’s climate was in fact much cooler than that of Mendoza. Del Populo felt otherwise, and he sent me July temperature records for Yinchuan between 1998 and 2006 to compare with his own January data for the Uco Valley between January 2003 and 2013.

‘The average maximum temperature in Uco Valley was 33.2°C, with an average mean of 21.8°C and an average night-time minimum of 9°C. The same data for Yinchuan is 35°C, 21.5°C and 14°C,’ he explained. ‘Since the two places are both semi-arid regions with similar annual rainfall patterns, I conclude that the site in Yinchuan has more degree days than the one in Uco. If you look at the region as a whole, I’d guess that the degree-day accumulations would vary from 1,400 in the coolest sites to 2,000 in the warmest.’ That’s a big span, but 2,000 is significantly warmer than both the Barossa and Margaret River, for example. Other Ningxia data I’ve seen suggests a 15-year average mean July temperature of 23.5°C, recorded between 1998 and 2002 – that’s a notably warmer midsummer than Bordeaux, Napa and even Toulon in southern France.

So why the light, herbaceous styles shown by many of the red wines? Viticulture is surely the answer. All of the region’s vines are young, and will remain so unless a new solution can be found to the winter chill. Dormant vines can cope with the regular winter lows of -10°C or so, but at some point every decade there will be a run of winter nights beneath -25°C, which would kill unprotected vines. (In 2008, Ningxia temperatures varied between +34°C and -27°C.) The vines therefore have to be laboriously buried every year prior to winter, by bending down the pruned stem and covering it with earth. After 15 years of that treatment, the trunks snap. Solutions have been proposed, such as a bush-vine system which would prune the trunk right back to the ground every year making it easy to bury, but none have been adopted as yet.

Moreover the standard of pruning, training and canopy management is often poor in Ningxia, with too little work done in the vineyards and too little understanding of vineyard quality requirements. Harvesting dates are often decided by logistics rather than grape sampling. In this severe continental climate, the first frosts come soon – then it’s ‘game over’ for the vintage. There are big problems with plant health, too, with up to 16% leaf-roll virus in some regions, especially in the Cabernet Gernischt, due to inadequate local propagation standards. ‘It’s easy,’ says Li, ‘to take a wine from zero to fair quality, but it’s much more difficult to improve a wine from average quality to high quality, since so many things need improving.’ He also points out one final problem: the government owns all the land, and leases are generally short. ‘That means investors can only use the land for 50 years or maybe 70 at most. That’s a really short time for a wine business.’

After my return from China, I also talked to US-based wine importer Bartholomew Broadbent (Michael Broadbent’s son) and David Henderson, the founder of Dragon’s Hollow, the major brand of wine from China in the USA, all of which is sourced from Ningxia. Broadbent was initially involved with importing and distributing Dragon’s Hollow, though that arrangement has now ceased.

Despite the challenges, Broadbent feels that Ningxia has ‘massive potential’, and Henderson recalled how on an initial reconnoitring trip with US producer Jess Jackson, ‘what excited us most about Ningxia was the dryness – not having the mould and mildew that you seem to get everywhere else’. Henderson still considers it ‘the finest wine region in China’, and is confident that ‘if great red wine is going to come out of anywhere in China, it will come from Ningxia’.

Li himself, meanwhile, is a little more circumspect. ‘It’s too early to say – about almost everything.’ He’s surely right. The viticultural challenges in the region are immense. Yet, when you come across a fully ripe, carefully vinified Ningxia red, its balance, poise, sense of freshness and tannic grip can be disarmingly good. Despite the climate figures, Ningxia seems to make wines of naturally modest, digestible proportions. It could yet surprise us all.